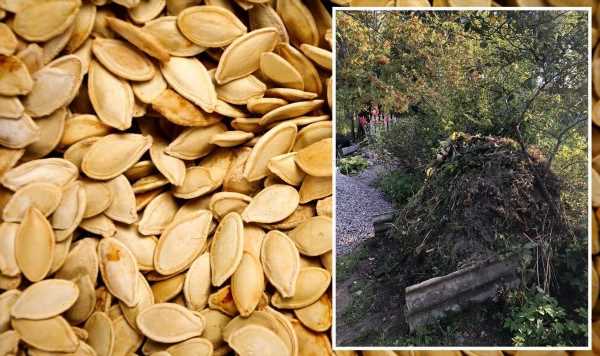 According to an expert, pumpkin seeds are not only great for humans, they’re also good for the garden. Graham Barrett, the gardening expert at beanbags.co.uk said: “If you’re looking for a cheap and cheerful way to keep your kids preoccupied for a couple of hours this October half-term, buy them a pumpkin. Not only can they let out their inner creativity by carving a character, but the pumpkin seeds inside are a great way to show them a beginner’s guide to gardening. Here are a couple of ways.”

1. Preserve the seeds to grow your pumpkins

According to the expert, you can preserve the seeds to grow another pumpkin for next year. This can save money as well as avoid waste.

Graham said: “To do this, you should soak them in tap water to remove any pulp. Next, you should add them to a colander and drain them before placing them on a dish towel and allowing them to dry fully.

“This should only take a day or two, however, once they’re dry, add them to a jar or a container, and place them in the fridge.

“After two weeks, you can then plant them in your garden or even in pots. Just make sure they’re not too close to direct sunlight if you plan on planting them indoors.

“The seeds should be planted four inches deep in soil that is loose and rich in nutrients (like compost).

“If there’s not much rain during the winter months, make sure you water them regularly, so they don’t dry out too quickly.”

2. Add them to your compost bin

Alternatively, pumpkin seeds also make a “great addition” to the compost pile because they are a great source of nitrogen and moisture.

The expert said composting the seeds will break down organic matter into soil which can be used for planting other plants in the garden.

It could also be used for landscaping projects later down the road because it’ll last for a long time.

Graham added: “The shells will break down quickly in compost piles, but if you want to speed up their decomposition, add some soil or straw to the pile first.”

3. Feed them to the birds

The gardening expert continued: “Pumpkin seeds are highly nutritious for birds, particularly in autumn when birds need more energy and fat to resist the cold weather.

“Pumpkin seeds are rich in protein, iron and zinc and contain essential fatty acids which help to lower cholesterol levels.

“The extra good news is that no preparation is needed – the seeds can just be scooped out of the pumpkin rind and added to a bird feeder or a dish. The birds will help themselves.”

Pumpkins are best grown from seed indoors, but can also be sown later outdoors in a sheltered spot, according to the Royal Horticultural Society (RHS).

They said Britons can sow indoors from mid to late April, sowing the flat seeds on their side. They added: “You can also sow directly outdoors where you want your plants to grow.

“Sow two to three seeds per planting hole, in late May or early June. Cover with cloches, jars or plastic sheeting. Leave this in place for two weeks, or as long as possible, after germination. Thin the seedlings, leaving only the strongest one to grown on.

“In late May, start hardening off indoor-raised plants, to acclimatise them to outdoor conditions. Do this by moving them into a coldframe for a week.

“If you don’t have a coldframe, move plants outdoors during the day, then bring them in at night for a week.

“The following week, leave them out in a sheltered spot all day and night. Plant them out in early June, when all risk of frost has passed.”