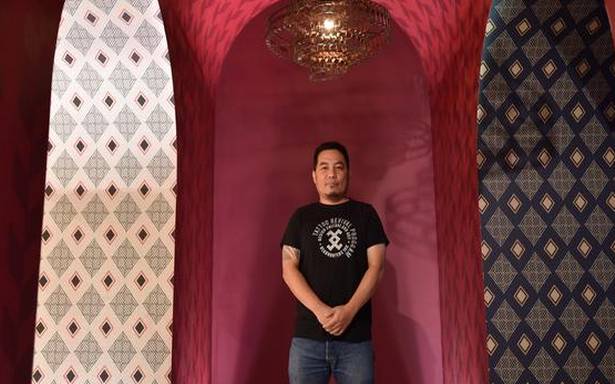 Earthy plum walls, with vertical stripes reminiscent of a bull’s horns, caught our eye at the recently-concluded India Design ID. The abstract work — Asian Paints’ wallpaper of the year, titled ‘Mithun’, in the paint brand’s colour of 2019, ‘Awakening’ — is designed by Delhi-based Naga tattoo artist Moranngam Khaling. Inspired by the visual memory of his state, where large wooden sculptures of the eponymous bovine are traditionally displayed outside homes to signify wealth, prosperity and fertility, it is one of three wallpapers the 34-year-old has created for ‘Naga Stories’, his collab with the brand.

Khaling’s transition to decor comes at a time when he is expanding his practice, pushing the reach of his research-and-revival-driven Shahpur Jat studio, Godna Gram. “For 10 years, I’ve been researching and travelling to promote Naga tattoo culture. [It is time] to start collaborations, to branch out,” he says. So when Asian Paints approached him, its commercial viability aside, he felt the project had an immediate connect with his culture. “It is not just on the body or clothes that Naga people decorate and express,” says Khaling, who is popularly known as Mo Naga. “The houses and surroundings, every pillar and bed, have designs and motifs that are about the person, their family or their community. So wallpaper just made sense for me.”

A fashion designer from NIFT Hyderabad, his foray into Naga tattoos came out of “an urgency” for somebody to start studying and promoting this art. “I’d started tattooing in my first year of college; it was merely an exploration of a different art form then,” he recalls. But as he learnt more about the richness of the dying tradition, he realised the need to bring back awareness, especially among his own people. “After the Nagas converted to Christianity, these patterns have been abandoned. So much so that youngsters don’t even know they existed.”

He works with anthropologists and historians from universities around the world, as well as the R&D division of the Ministry of Culture, to research archives of photographs and documents and resurrect ancient patterns in a contemporary context. He has also lent his expertise to other projects, like helping his friend, and writer, Phejin Konyak’s collaboration with Dutch photographer Peter Bos on The Konyaks: Last of the Tattooed Headhunters. The 2018 book documents the life of the Naga tribe known for their face tattoos.

The two other wallpapers in his collaboration, Iris and Soul, are inspired by patterns found in Naga textile art, war codes, Shamanistic rituals, and folklore. Iris draws on the universal symbols to ward off evil spirits, an eye and web, while Soul looks to the serpent, the “keeper of the water world and a symbol of fertility”.

He is, however, cautious about cultural appropriation. His work, he says, is also about protection. In his tattoo studio, for example, there are specific patterns that he doesn’t give to “outsiders”. “It’s like how civilians shouldn’t be wearing uniforms,” he says, adding that these “traditional patterns talk about individual achievements, or of particular families. Some elders still have them”.

Khaling’s foray into other media, including the Asian Paints collaboration, is part of his ongoing efforts to bring Naga art back to its people. Up next is an exhibition of paintings. “At a time when inspirations are being drawn from the Northeast, if the native people themselves don’t know about their art, then, in the long run, it will be left open for shallow interpretations and appropriation,” he concludes.

The wallpapers from the Naga Stories series will be available at ₹14,000 for a roll, at stores and on nilaya.asianpaints.com from March.