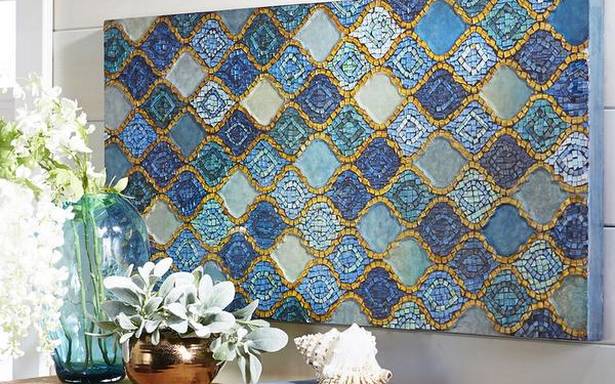 Mosaic is defined as a type of artistic composition created by inlaying small pieces of coloured stones or glass called ‘tesserae’ — in a mortar of white or coloured cement — to create various designs. ‘Pebble’ mosaics were an earlier version of mosaic, where pebbles were embedded in mud or lime and sand mortar and, arranged to form interesting patterns. Over time, various materials such as glass beads and shells were also used in the creation of mosaics.

The art form started appearing in Mesopotamia as early as third millennium BC, the earliest known being at a temple in Abra using pieces of sea shells, stones and ivory. Mosaic with patterns of human figures and animals became popular in ancient Greece and Rome. Intricate floor and ceiling mosaic patterns were used in religious buildings from Christian Basilicas in the 4th century to Jewish Synagogues and early Islamic Mosques in the 7th and 8th centuries.

Romans also used mosaics in their homes as a sign of wealth and importance. The scale of some Roman mosaics in their public buildings, were very impressive and many of these examples are in almost pristine condition today due to the durability of the materials that the art employs.

Design patterns were traditionally created in-situ (on site) by skilled masons who were also artisans. Traditionally hand crafted, mosaics represented the extremely high skill level and patience of artisans in those days and added a touch of art to buildings. Cast in-site mosaic flooring was very common in South India in the early 80’s as an interesting, efficient and eco-friendly craft.

Although mosaic is viewed by professional and street artists as a popular art form today, its use in buildings as flooring is less prevalent giving way to lighter, mechanically mass manufactured and less inspiring tiles.

A key reason is the lack of value given to art and handwork within our buildings of today and the need to focus on fast paced construction practices that would be easy to replicate.

Having said that, it is heartening to see the art being revived although in a much smaller scale, allowing interesting mosaic patterns to be used as accent within natural stone, cement or even tile flooring (terrazzo).

Pre-made mosaic floor tiles are also widely available, making it possible to re-create the charming mosaic floors of yesteryears. Mosaic art is timeless, charming and unique. This type of flooring results in negligible wastage and pollution, making it an environmentally friendly, alternative to conventional floors, a floor that can be used to create a unique artistic identity to our buildings.

The author is the founder of Green Evolution, a sustainable architecture firm