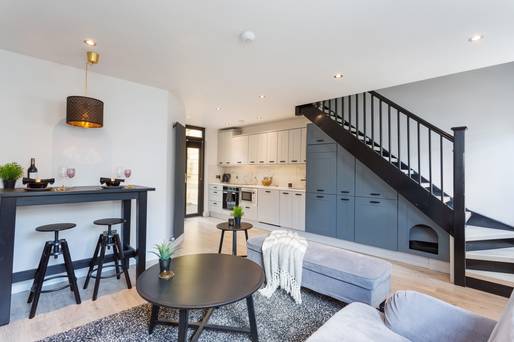 For the elder lemons of Dublin who like talking competitively about poverty, the number of urchins your parents or grandparents could crowbar into the family’s two-room artisan cottage back in the day has become as much an ancestoral badge of honour as having being battered personally by Lugs Brannigan.

And those who have more recently acquired tiny dwellings over the years in order to renovate and extend them have discovered from their elderly neighbours (or by researching the 1911 census in particular), that families of 14 and up, alongside lodgers, were commonly squeezed into city cottages; often with six or 10 children sharing one big bed.

When asked how they did it, older neighbours will point out that children were kept outside at all times, except for meals and bedtime.

The three decades to the noughties saw most of the capital’s tiny cottages acquired and revamped and it’s rare to find them in ‘original’ condition today. In fact more recently we are seeing modernised homes coming back to market. With a good architect and clever redesign, the sheer amount of space that can be eked out from such small dimensions is almost as miraculous.

If new owners are lucky enough to have more than a narrow lane or tiny yard at the back, the first step is usually the demolition of the standard added kitchen lean-to in order to plan a modern extension that can open up the space and bring in the light.

Perhaps a design flaw of these initially tiny homes was the wasted space in the attic/roof level. So for those who can strip out the house and dig down, as well as take down the ceilings and open up the attic, two floors; or at least a decent mezzanine space can be created. The addition of roof light windows to further brighten the interiors, and the demolition of non-vital walls to permit more open plan space is the usual route to take.

Two period cottages on the market this week through Sherry FitzGerald from either side of the Liffey happen to have histories from both sides of the social divide. Having both been refurbished and extended recently, they also demonstrate just how much bright living space can be prised from what were once notoriously dark and confined dwelling types.

When Gulistan Cottages were constructed in Rathmines, Dublin 6 in the early 1900s, they were designed to house members of the local authority’s fire brigade crew as well as municipal workers. The cottages were located in behind the fire station (now an art and culture centre), near Leinster Cricket Club, Rathmines Chuch and not far from the world famous telescope building factory of Sir William Grubb. The census of 1911 has the Dunne family of nine living there.

Rathmines, although then run by a staunchly Unionist council, had in its midst, a staunchly Republican fire brigade. From 1916 to 1922, a period of conflict currently under commemoration, the firemen of Rathmines seemed as likely to be involved in activities that would start fires, as much as put them out. During the 1916 Rising fireman Joe Connolly could be found in the GPO with Pearse and on Stephen’s Green. He later became Dublin’s fire chief. In 1920, a massive fire at Rathmines Church attended by the Rathmines Brigade involved the fire officers hauling hidden IRA explosives and weapons from the stricken church’s vaults to steal them away to safety.

Rathmines fireman Denis FitzPatrick was an IRA man shot during the Civil War in 1922 in a battle with the State army. He was chief at Rathmines but died in the station of complications from that injury.

Fire service historian Las Fallon detailed how several members of the Dublin fire service also assisted in rescuing IRA men from inside the Custom House wile attended the burning building in 1921, while at least one fireman would recall entering the building and spreading the fire “into parts of it which had not previously been on fire”.

The cottages of the Rathmines’ firemen and other municipal workers were considered a step up from the average at a time when a third of families lived in one -room slums. These days the refurbished versions are also a step up from their counterparts elsewhere in the city as indicated by the prices they have been achieving. No 44 sold recently for €460,000, No 48 went for €430,000 last year and No 47 made €520,000. Now Sherry FitzGerald has the reworked No 55 for sale asking €525,000.

The house has only recently been completely refurbished and extended with the job finishing in June. The work achieved a new second floor. The accommodation now comprises an airy open-plan living, dining and kitchen area opening to a west facing private courtyard to the rear. There is a double bedroom and ensuite at ground level also. Upstairs comprises the large main double bedroom with a study area and eaves storage and newly fitted modern shower room.

For a period building it has a high B3 rating, newly fitted double glazing, shower room suites, floors, kitchens and appliances as well as gas-fired heating and a new Combi boiler. Its main selling point (apart from its external cuteness) is the big open-plan living space with its limed oak-style laminate flooring, recessed spot lighting, polished quartz counters in the kitchen with a four-ring induction hob and extractor with Powerpoint oven. There’s a Powerpoint dishwasher, an Indesit washing machine, Servis fridge freezer. There’s also pantry storage. The property is on offer through the Ranelagh branch of the agency.

Rathmines has been undergoing something of a revival recently with the refurbishment of the Swan Centre, the arrival of Fallon and Byrne, the revamped retro Stella Cinema and a range of new nightspots like Blackbird and The Bowery.

Meantime north of the river in Drumcondra, Dublin 9, the same agency is also selling the revamped cottage at 6 Gracepark Road. While the frontage is much the same in size as Gulistan, this likely would have been a privately-built cottage (as indicated by the red brick) and aimed at a middle-class buyer given that it was built with considerably more space inside.

This is confirmed by the same 1911 census which shows the occupants at No 6 included seven people, with the owners listed as Maurice McNally, a civil servant, and his wife Elizabeth. They have just one son James who is listed as a medical student. However, they also appear to have two servants living with them and two lodgers also for additional household income, including a 60-year-old widower and a dairy manager.

This cottage has also been refurbished, extended and redecorated to take it up to just over 1,200 sq ft, a floor area larger than an average family semi. Many of the original period features are still intact here. The accommodation now comprises a hallway with guest wc, polished wooden floor and a large understairs storage area, there is a bedroom to the right of the hall with a pretty cast iron fireplace and a view of the open green.

Steps lead to the dining room which in turn leads to the kitchen. The kitchen is fitted with a range of floor and wall units and has a tiled floor. The living room to the rear has large windows overlooking the rear garden and a door leads to another reception room which could be a family room or playroom. Upstairs there is a shower room and two generous bedrooms, the main room has an ensuite bathroom. To the rear the private garden is laid in lawn with a patio area and off street parking via a remote controlled gate.

Gracepark Road is handy for all the amenities of the village and within a walking distance of Drumcondra Station and the city centre. The Luas at nearby Phibsborough and Cabra is also within reach, as is Griffith Park, the Botanic Gardens and Na Fianna GAA club. The house enjoys an open green area right across the road. The price is €550,000.