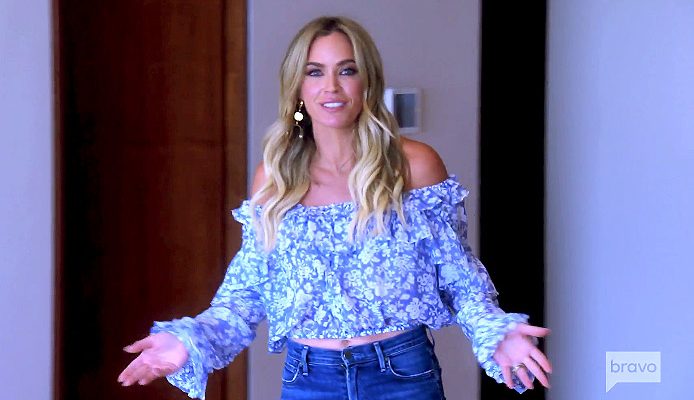 Teddi Mellencamp Arroyave has a new house to show off!

Between seasons eight and nine of The Real Housewives of Beverly Hills, the reality star and her family moved into a sprawling cliffside home.

The ultra-modern property, which she showed off to Bravo, features an open floor plan, where her kitchen, dining and living room area all flow into one another.

“This room is completely open, so the kids can be hanging here. I can be cooking. Ed can be working at the dining room,” she says in the video as she leads a tour of the space.

However, the living area isn’t just functional for her family. It’s also useful for watching their many security cameras, which offer 16 different views of the exterior of their house displayed on a massive TV.

“We can see everything from this room,” she says.

And while seeing things in close proximity to her home is important to her, so is having a breathtaking view of Los Angeles.

“I mean the view is really my happy place,” she says as she walks onto the porch. “You feel a little stressed? All of a sudden you walk out here and you take a couple breaths and you’re good to go.”

Another space that’s peaceful for Arroyave, who runs an accountability coaching firm called ALL IN by Teddi, is her bedroom, where she starts each morning at around 4:30 A.M.

“I’m not going to lie. I spend a lot of time in my bedroom,” she says before adding, “Not what you think.”

“I love working from here,” she continues. “I wake up 4:30 to 5 A.M. and I kind of do my ritual. I do it from the bed. I have my water, my cup of coffee, and I just do business right from here and it kind of starts my morning right before the kiddos wake up and they’re constantly on the go.”

WATCH THIS: Teddi Mellencamp Arroyave Reveals How She Keeps Herself Accountable With Her Weight Loss

While most of her home is decorated in a modern style with stark, white furnishings and gold accents, her children’s rooms are more playful.

Their daughter Slate, 6, shares a “super cute” and “light” room with her husband Edwin’s daughter from a previous relationship, Isabella, 10.

The room is decorated with fuzzy pink stools, stuffed animals, and a clear bubble chair that hangs from the ceiling.

In their four-year-old son Cruz’s room, Arroyave chose to go with a nautical theme, and made up his bunk bed with blue and white fish sheets.

“It’s very important that he’s a big boy now so he has the big boy bed,” she says. “We love this room. It’s for little baby Cruzie pie.”

Outside, Arroyave says her garage holds “toys” for both herself and her husband. Edwin loves the space because it’s home to his Lamborghini (Cruz has a tiny matching one), while Arroyave loves that it holds her Peleton and Nexersys workout equipment.

“I can open this door, get a nice breeze, work out, while the family is still sleeping,” she says.

RELATED: ‘Beaching It!’: RHOBH Cast Shows Off Their Toned Bikini Bodies in the Bahamas

And while that space is for more serious “toys,” their other outdoor spaces are more kid-friendly, like the terrace that’s accessible from every room in the house. They have foosball and ping pong tables on their downstairs patio, which leads to a pool where there’s an outdoor TV for movie screenings and various pool floats, including an inflatable bull for riding competitions.