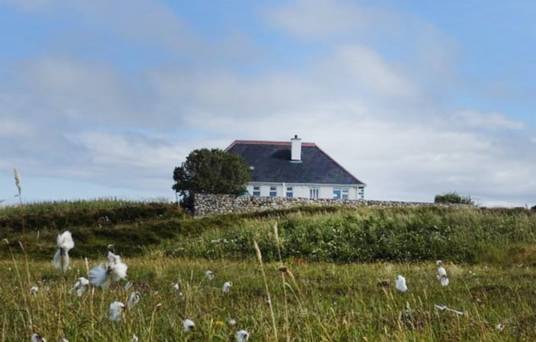 The broken shoreline of the headland at Ballyconnell in northwest Sligo is a particularly beautiful slice of the Atlantic coast. It’s a wild spot, all cutaway bog, pools and fields, overlooked to the east by the Sligo landmark of Ben Bulben.

It inspired artist Sean McSweeney, who in 1984 moved from Wicklow into the local schoolhouse that his mother had once attended. McSweeney, who died last year, produced some of his finest land and seascapes at Ballyconnell. He also found a nearby cottage for his friend, the writer Dermot Healy, and they were part of a group that founded the Model Arts Centre in Sligo.

It’s the wild landscape and the sea that drew Cliodhna Hayes, the vendor of Lochan, here too. “I love glorious isolation,” she says, “step out the back door and all you can hear is the sea. All around the house is designated as a conservation area so there is no chance of anyone building around you. It’s up on a hill, so you feel there’s no one else on the planet.”

Cliodhna knows the area well. As a child, she had spent many summers with her grandparents in their cottage in nearby Ballintrillick. Even so, it took the best part of five years to hunt down the perfect place. The two-bedroom house she and husband John eventually settled on was built in 1996 and had been used as a holiday home. The couple paid €160,000 for it in 2016.

They invested approximately €30,000 in upgrading the interior and doing works. The chimneys were re-leaded and the flashing replaced, and the prep work was done to accommodate an attic conversion, says Cliodhna. The couple also replaced the existing bathroom suite and added an en suite to one of the two double bedrooms.

The updated kitchen/dining/living room has spectacular views. It is a bright, open plan space with country-style units, wooden counter tops and Belfast sink. There is a flagstone floor and access to the side garden from the kitchen.

The house has been rented out since June 2017 – the couple had planned to move in permanently this summer when their daughter completed her Leaving Cert.

“It’s been very lucrative as an Airbnb – we charge €100 a night, a little more in high season,” says Cliodhna. They had full occupancy for summer 2017 and 2018, earning themselves super host status. She is confident the property could continue to bring in a rental income under new owners.

Now the family’s plans have changed. “We had planned to do a spectacular extension in a modern design at Lochan but then the opportunity came up to restore an old period property and we had to decide whether our love comes down to all things old or all things new.”

In the end, the period property has won. “It was tough, we tried for so long to buy something in Ballyconnell and it is a bit of a wrench.”

The prospective purchaser will get 360 degree views, a house in turnkey condition as well as an ideal holiday home or rental investment.

Lochan once formed part of the great Lissadell estate, the childhood home of Constance Markiewicz. It comes with 0.7 acres of garden, enough for a picnic table, space for two cars, even an extension, subject to planning permission.

The sale also comes with a right of way across the fields to the shoreline and a cliff walk that, says Cliodhna, “is stunning”. There is a little cove called Serpent’s Rock that is dotted with fossils about 500 metres’ walk from the house. While Ellen’s pub, reportedly the oldest bar in Sligo, is a short walk away and serves ‘a good pint’ and has live music on Fridays.

Lochan sits midway between the town of Grange, 10km or so away, with a primary and secondary school, shops and a cafe, and Carney, a smaller village with a good Italian restaurant. Sligo town is 20km drive.