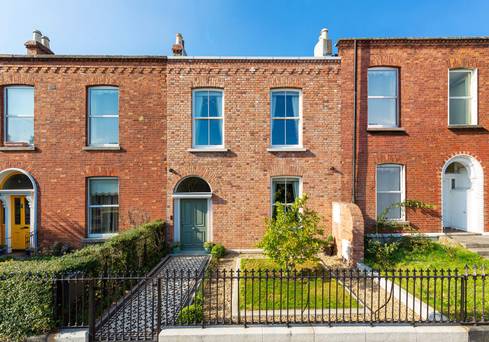 This mid-terrace property at 12 Victoria Street in Portobello is unique for a number of reasons. First, it has been rebuilt from scratch following a fire that left only the front facade standing. Second, while the exterior looks 100pc Victorian, the interior is unashamedly 21st century.

“It’s like a spaceship,” says Peter Kenny of Knight Frank, selling agent for the €1.5m property. “Inside it is a bit like a tardis.”

Viewed from the street, No 12 has all the period trimmings. The original front facade was replaced with reclaimed brick that is a mellow shade of terracotta. There’s nice brick detailing around the sash windows, a fanlight over the door and patterning under the eaves so that it blends with its neighbours. The owners have also laid a smart Victorian-style tiled path to the front door.

When the door swings open, however, it’s a different story. The vendors paid €380,000 in 2012 for what was essentially a site and took the chance to complete re-imagine the Victorian interiors.

That meant investing in a huge amount of green tech – from a 4,000-litre rainwater-harvesting and filtration system, to solar panels to provide not just hot water but electricity, and zoned geothermal underfloor heating to boost temperatures. A heat recovery and ventilation system and high-spec insulation brings this period property up to a toasty BER A3 rating.

There are also plenty of tech toys to enjoy. In fact, the house – heating, blinds, lights, gas fires, the lot – could be run from a smartphone so that, should the new owners spend time abroad, they could easily keep things ticking over.

In terms of layout, too, the vendors made innovations. While the usual ‘priest’s room’ to the front remains as a formal living room, step down to the rear and the property flares out into a bright L-shaped open-plan kitchen/dining/family room with two staircases.

A glass wall folds back along the corner of the L-shaped extension so that the space seems almost to hang in the air. It opens onto the southwest-facing courtyard garden. The ‘engine room’ that houses all the technical wizardry is located to the rear and accessed from the patio.

The illusion of weightlessness continues with a remote-controlled glass hatch door set into the kitchen floor so that the gleaming white wine cellar is on show. With enough storage for 1,000 bottles, it is generous enough to supply the most hospitable of parties.

Other design touches include a ‘floating’ stairs of glass with polished walnut steps that lead from the kitchen up to a large study on the return. It could be turned into a fifth bedroom and has folding glass doors that overlook the rear garden.

The second staircase leads up to the bedroom floor where the master bedroom has a walk-in wardrobe and hotel-quality en suite with steam room and double shower. Two further bedrooms are contained on this floor.

In comparison with other properties on the street, No 12 is large – running to 179sqm – which the vendors achieved by extending into the attic space to make a guest suite on the top floor. Besides the bedroom with walk-in wardrobe, there is an equally spacious bathroom with steam room, egg bath and double sinks.

To the rear of the property, the courtyard garden is set over two levels and is low maintenance. The patio is finished in Indian sandstone and is shaded by a remote-controlled awning. There is off-street parking behind sliding gates.

No 12 came to the market briefly last year and has been relaunched this week at the same price of €1.5m. In the meantime, values in Portobello, along with those in other Dublin areas, have been falling. Still, few houses can boast the high-tech energy-efficient fit-out and innovative design of this Victorian home.

Portobello itself is having something of a moment. There is a good number of restaurants springing up to serve the new wave of residents, including Barry Fitzgerald’s Bastible, newcomer Clanbrassil House and relaxed spots such as Gaillot et Gray, Brother Hubbard South and the purpose-built yoga studio and café, Little Bird.

The area is popular with families with young children as there is a choice of schools, from CBS Synge Street, St Patrick’s Cathedral School, Educate Together and St Clare’s, to Ranelagh Multi-Denominational a little further afield. Dublin city centre is a short walk or cycle away, and there are good bus links for those who prefer four wheels.