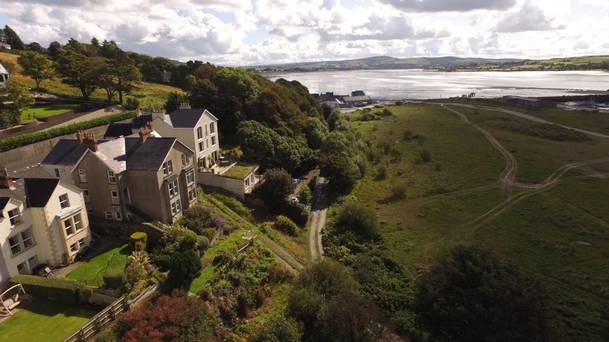 What is it? If I told you a six bedroom, 3,000 sq ft, three storey Edwardian, perched atop cliffs looking down on the sea, a marina and a beach could be got for just €150k, would you be interested?

Tell me more about the place…

Briar Cliff, as the name suggests, is perched atop a cliff at Fahan in Co Donegal, overlooking truly incredible scenery, including Lough Swilly, sandy beaches and the Fahan Marina. It has a four-bed residence upstairs and a two-bed interconnected apartment on the ground floor. Fahan was a hot spot for Northern Irish buyers until Brexit, but now northern banks won’t lend for southern properties. So 50pc of the competition has just been wiped out. Hence the low price. The former Derry to Lough Swilly Railway at the end of the garden is to become a tourist generating cycleway. Rendered exterior means you can spray on super insulation dash to the take this home’s BER to new heights.

And the bad news?

Water ingress on one side thanks to eroded gutters/ flashing which will need replacing; rewiring, replumbing, replastering, new bathrooms and kitchen.

How much to buy it?

Brexit has kicked the price right down to €150k.

And to fix it up?

A €100k spend would likely sort Briar Cliff out for the next 100 years.

What will I end up with?

A dream seaside hideaway with potential for a cafe business downstairs serving the cycleway.

Who do I talk to?