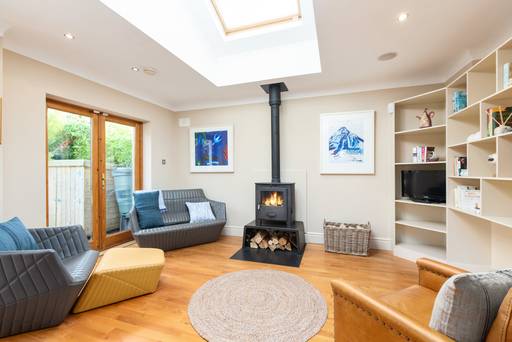 When Queen Victoria married her German Prince Albert in 1840 – a rigid man of Spartan habits and a teutonic regard for the health benefits of dunking himself daily in freezing cold water – the besotted monarch promptly submitted herself to be dunked daily too.

He had a bathing machine made for her, rather like an old-style gypsy caravan on four high wheels. The queen shuffled inside with her ladies in waiting and it was pushed into the sea. Inside she changed into her bathing suit – a head-to-toe affair, to the wrists too – and descended the back steps to immerse herself. The body of the ‘machine’ protected her from prying eyes at the shore.

Hydropathy – the use of cold water immersion as a medical and health treatment – exploded as a result, causing everyone to go out and jump in the sea. The craze saw seaside resorts spring up for this purpose all over Britain. And so Prince Albert’s health kick became the foundation of the modern seaside holiday. Across the water in Bray, the good burghers of the town council were all eyes. Realising Bray had all the basics required to become a Blackpool, the local business community assembled a vast fund and hired the famous railway engineer William Dargan to get this seaside- ification plan on track.

They invested in a promenade, which got damaged by the sea soon after its construction. Big hotels were encouraged and money was splashed out on flower shows, brass bands and the sort of amusements which were a regular feature of successful resorts across the water. There were investments to fix the town’s then embarrassing sewage problems and its fresh water shortage. There could be no hydro- pathy without it.

But efforts to get a proper pier constructed were financially swamped, along with a costly scheme for a new train line to Enniskerry in the nearby hills which was abandoned unfinished.

Two elaborate new hydropathy centres (both hot water and cold water) to drive health and invalid tourism also went under in jig time. In 1859 Dr Richard Barter constructed one of the grandest Turkish baths complexes seen in these islands at Quinsborough Road. With minaret towers, it looked an Arabian palace. The attendants were dressed in Turkish costumes and provided sheesha pipes and sherbet for patients. It was hailed as “an admirable sea bathing preparative and accompaniment”.

Hot on its heels in 1860 Dr Edward Haughton opened his amazing Hydropathic Establishment at the sprawling Galtrim House off Seapoint Road, for cold-water treatments “with a regimen suitable for invalids”. Both lasted just six years before closing their doors. The former had a second life as a cinema before its ruin was demolished in 1980. Sickly Galtrim House followed in 1984 after a suspicious fire. There are apartments on its site today.

The good burghers resumed their campaign to get Blackpooled up, but ironically it was only after the War (almost a hundred years later) that rationing in the UK finally brought its holiday-makers surging to Bray for bathing, penny shove and donkey rides. But these investments did pay off in a different way, making the town a perfect dormer suburb where people would pay good money to live.

And so a developer bought the garden orchards from Dr Haughton’s failed Hydropathic Establishment at Galtrim house and began building permanent homes in the 1920s and ’30s for the new car-owning middle classes.

No5 Galtrim Park (today named Cranleigh) was among the first to go up. It was acquired by the Scott family and became a centre of veterinarian excellence until 1997, when the present owners acquired it.

Two home-working legal eagles with music-loving children, the couple opted to renovate the house from head to toe in 2005 calling upon the services of the well-known Greystones-based architect Colum ó Broin. The brief was for a light-filled home which could cater for two home offices for the adults alongside compatible spaces for the children in which to indulge in very loud music.

Today it’s a spacious, airy and more open version of its original self, with hideaway pockets. A clever touch has been the recreation of the badly damaged original chimney-piece in the rear reception with a nifty modern deco interpretation. The original stair, which includes an unusual set of upper and lower stair gates in crafted wood, was handed over to bespoke joiners to restore. The floors are in Juncker polished boards. There’s an intricate stained glass panel in the hall door.

It has five bedrooms, a reception hall, an open-plan kitchen, dining and living area and two traditional receptions, each with suitably crafted chimney-pieces of character. The kitchen opens into a decent-sized rear garden with a circular sun patio for summertime barbeque therapy.

So if you do want to be beside the seaside, but without all the fuss and clamour, this C2-rated home is on offer through Sherry Fitzgerald for €895,000.