Prince Harry and Meghan Markle made headlines on Thursday when their Netflix Docu-series trailer dropped, and the dramatic clip included a snapshot of their private UK residence Frogmore Cottage.

The Sussexes reside in Montecito with their two children Archie and Lilibet, but they also have a home in Windsor for when they are back across the pond. The royal couple included a photograph of themselves inside the property’s amazing kitchen in the teasing trailer, and we’re blown away.

Meghan is seen sitting on the kitchen island in a full-length gown as Prince Harry leans in for a kiss, wearing a shirt, trousers and braces.

The photo allows fans to observe the sweet country-style kitchen almost in full, where the family have a massive marble topped kitchen island with in-built cupboards and pendant lights hanging overhead. There are open shelves with hanging saucepans and cosy touches have been added to the cooking space including plants, flowers and artwork. 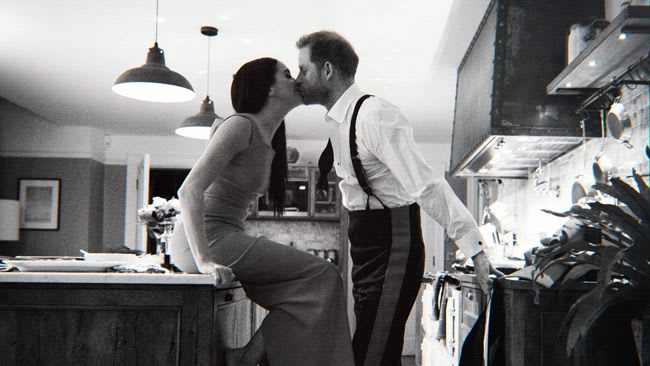 Check out the kitchen inside Frogmore Cottage

The snap appears to have been taken on the evening of the Mountbatten Festival of Music which took place at the Royal Albert Hall in London in 2020.

The home was formerly made up of five separate properties for those working on the Windsor estate, but it was converted into one five-bedroom home in 2019 before the couple moved in.

Their UK home is located in Windsor

It is located within acres of stunning parkland and in front of an incredible lake and Grade-II listed Frogmore House, which is where the royals hosted their wedding reception in May 2018.

Harry and Meghan’s renovations on the property costed the Sovereign Grant a reported £2.4million, but the couple subsequently paid back the money.

THE LATEST: 5 key details you may have missed from Meghan and Harry’s Netflix trailer