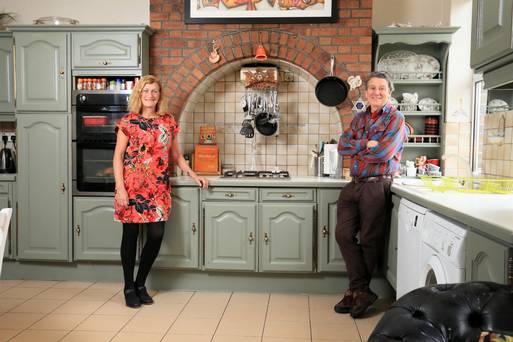 Ranelagh has changed beyond recognition in the 30 years since Siobhan and Rob Woodnutt bought No 13 Woodstock Gardens. The Dutch Colonial-style house lies just off the main drag, at the end of a terrace in a cul de sac.

“Back then there were lots of junk and knick-knack shops,” says Rob, “but now it’s all restaurants and boutiques. It’s become very smart and there’s a great buzz about the place.”

No 13 dates from 1904 and the Woodnutts are only the second family to have lived there in all that time.

“It was in quite a state when we bought it,” remembers Siobhan. “Rob had to convince me that we could make it habitable.”

“It was an elegant heap,” says Rob. “But I could see that it would make a great family home.”

Having blown their budget, the couple had to move in and live on the upper floors of the house while their builders worked to make the house liveable. Without running water, they were forced to take showers and invite themselves to dinner at friends’ houses.

“In effect, we gutted the house,” says Rob.

Among the works that the couple undertook were re-wiring and re-plumbing, the installation of new windows and the conversion of a coal cellar into a handy ground-floor lavatory. They knocked together two smaller rooms at the back of the house on the ground floor to form one large open plan kitchen/living/dining room which opens out on to the low-maintenance garden. Big windows here bring in plenty of natural light, as does a large roof-light at the very top of the house.

On the first floor there are three double bedrooms and a shower-room, with two further doubles on the second floor. The Woodnutts moved the original bath to the top floor bathroom, where there is also a separate shower.

Many of No 13’s period features remain intact. The front door is the original, as are its stained glass panels – the only ones on the street to have survived the passage of time. The floorboards and fireplaces are also original.

Dublin 6 has long been popular with families because of the excellent choice of schools in the area. The Woodnutts’ now-adult son was the first pupil enrolled in the Ranelagh Multi-denominational National School, and went on to attend Sandford Park, while his sister was a pupil at Muckross. The proximity of both schools – Sandford is literally a minute’s walk from No 13 and Muckross not much further – meant that the house saw a constant stream of visiting friends.

Ranelagh is home to some good independent shops, including The Village Butcher, The Company of Books and Seagreen, and a great selection of restaurants, with Bunsen, Nightmarket and Dillingers all perennially popular.

For Siobhan, who grew up in the Meath Street area and lived in Stoneybatter before moving to Ranelagh, the convenience of Rathmines and the city centre is something that she cherishes.

“I usually walk into town, while Robert cycles,” she says. “I’d often go in on the spur of the moment to shop or see a film or a show; we are into music and we go to a lot of gigs too. I like the countryside for walks at the weekend, but I could never live there.”

Recently retired, the Woodnutts plan to downsize to a smaller house in the area and hope that a young family will take on No 13 and enjoy it as much as they have.

New owners will probably wish to address the E1 BER and update the decor, but they will be able to take their time in making improvements as the house is perfectly liveable as is.