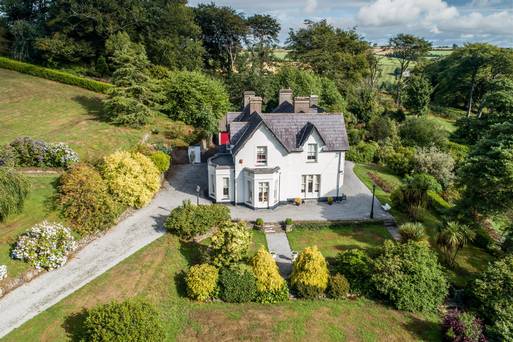 It’s strange how local legend can form, sometimes wrongly, around a kernel of truth. Long after the Irish War of Independence led to the demise of the Anglo-Irish aristocracy here, an air of mystery lingered over Carrigrhu House, one of a plethora of ‘big houses’ on Great Island in Cobh.

The local gossip could be the stuff of a period television drama: Lady Mary Aldworth, the last member of the gentry to reside at Carrigrhu, was supposedly caught spying from a cupboard on a masonic lodge meeting in the house. Because Lady Mary had witnessed the secretive rituals of the Freemasons, the brethren ultimately decided to initiate her into the lodge, making her the first female Freemason in the world.

In Cobh, this folklore was handed down from generation to generation, according to Watching the Wild Waves Motion, a book of stories about the town by Anne McSweeney. But, as the writer points out, locals had in fact confused Lady Mary with the real Lady Freemason, Elizabeth Aldworth (nee St Leger), born 142 years earlier than Mary Aldworth, and who reportedly surreptitiously viewed the proceedings of a lodge meeting at her family home, Doneraile House, as a teenage girl. The portrait of Elizabeth St Leger hangs in the lodge room of almost every lodge in Ireland.

It’s easy to understand how the story about Lady Mary grew legs: like Elizabeth, she too came from money (her father was the 3rd Earl of Bandon), she married a Richard Aldworth and lived at the vast Aldworth seat at Newmarket Court in Co Cork. After the death in 1899 of Lady Mary’s husband, Colonel Richard William Aldworth, a British military hero who was also High Sheriff of Co Cork, his brother Robert inherited Newmarket Court. So Lady Mary moved to Carrigrhu when Cobh was called Queenstown. There, according to the 1911 census, she had a parlour maid, a kitchen maid, a ladies’ maid and a cook on staff.

Lady Mary died in 1920, at a time when the big houses of Cork were being burned by the IRA, and there were no children to inherit the estate.

Carrigrhu had various tenants over the subsequent years and was turned into apartments at one stage. It was in a poor condition when it was bought more than two decades ago by a Swiss couple, Isabelle and Peter Walz, according to McSweeney’s book.

The couple spent summers there and gradually brought it back to its former glory. Over the years, they’ve carried out re-plumbing and re-wiring, have redone part of the roof and installed new flooring, two bathrooms and a kitchen. Their children now having flown the nest, and the family spending less time in Ireland, they have put Carrigrhu on the market.

Today, the 1880-built house is a five-bed property spanning 3,659 sq ft and sitting on 5.5 acres. A long, gravelled driveway, bordered by trees, hydrangeas and rose bushes, leads up to the four-bay, two-storey house and its grounds, which include a number of secret gardens. The property is brimming with intact period features like sash windows, and it commands views of Cuskinny Bay and the Cuskinny Marsh Nature Reserve, which is managed by Birdwatch Ireland.

Inside, the reception hall has original plasterwork and two archways. To the right of the hall is an interconnected dual-aspect lounge/drawing room. The lounge has a varnished wooden floor, a period slate fireplace, and there are shutters to the drawing room’s two bay windows. Folding doors between the two rooms can be closed to create two separate spaces. The lounge leads to a dining room which, in turn, is linked to the kitchen/breakfast room via folding doors. There, the kitchen units, feature island and tiled worktops could do with freshening up, but there is plenty to work with, including a brick surround to the hob, exposed timber ceiling beams and double doors opening onto the garden.

There is a utility room and a guest lavatory on the ground floor.

In addition, attached to Carrigrhu, is a self-contained one-bed apartment that can be accessed both from inside and outside the house, making it an ideal space for an au pair, a guest, or a tenant.

Upstairs are the five double bedrooms and the main bathroom. The dual-aspect master bedroom, which has wainscoting and a vaulted ceiling, is at the front of the property and comes with an en suite with a shower and a bath. The second front bedroom has a walk-in wardrobe.

Two of the other bedrooms overlook the gardens, while the fifth bedroom is situated on a mezzanine level; this dual-aspect space is accessed via a den area. To the rear of the home is a study, but this room could be turned into a sixth bedroom, if necessary.

The family bathroom, with exposed timber ceiling beams and recessed lighting, has a bath with an overhead shower.