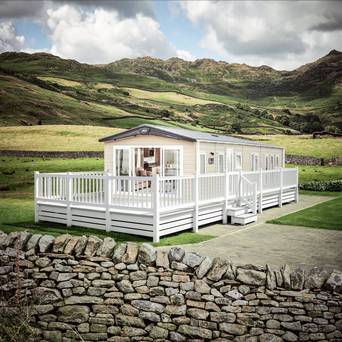 Mobile homes were once the preserve of upwardly mobile Dubliners seeking a summer bolthole in Brittas Bay. But at one of the capital’s leading dealerships, almost half of sales are generated from buyers living in them full-time in a relative’s back garden – often illegally – to either save for a deposit or avert record-high rents.

“We have younger people all over the country who just can’t get on the property ladder and are putting a mobile home in their parents’ back garden,” says Bill Farrell, a director of Rathcoole-based Harry Farrell & Sons. “It’s a huge part of our business.”

The company, set up by Farrell’s parents in the early 1960s, also supplies used mobile homes and runs seven coastal holiday parks. Now Farrell says Dublin’s local authorities should set up mobile home parks, similar to those used in parts of the county in the 1960s and 1970s to help alleviate the housing crisis.

“People are getting desperate,” he says. “Every single day we have someone asking to buy a mobile home to live in and every day they ask, ‘Where could we put it?'”

House prices may be easing off in Dublin, but the once maligned mobile home is experiencing price rises amid demand from people staving off homelessness and from holidaymakers upgrading to luxurious new models. Last year, the parent company of the Swift Group, the UK’s largest motorhomes manufacturer and one of the main suppliers to the Irish market, saw its turnover hit a record £289m (€337.4m). Once the UK leaves the European Union, prices in Ireland may climb further if duties are tacked on, Farrell says.

“We are telling customers interested in buying to come before the end of January, when Brexit is due to happen, in case of price increases,” he says. “At the moment, new models with a winter pack, which is double glazing and gas central heating, start in the mid-€30,000s and then go right up to €95,000.”

However, any free-standing structure bigger than 269sq ft requires planning permission if the owner plans to live in it – and planning departments at local authorities tend to take a dim view of mobile homes. So buyers are instead pinning their hopes on neighbours either not spotting their mobile home in the back garden or, if they do, not complaining to the local council.

Noel Larkin, a chartered building surveyor in Dunshaughlin, says local authorities traditionally frowned upon mobile homes as it was viewed as a “back-door method for getting planning”.

“People would plonk one on their land and put in planning afterwards for an entire house,” he says. “However, rents are so crazy that for many people, putting a mobile home in the garden of a family home seems an obvious solution. Strictly speaking, they should apply for planning, but because of the housing crisis, perhaps local authorities don’t want the negative publicity of being seen to kick people out of mobile homes.”

In March, members of South Dublin County Council sought to compel the local authority to relax planning regulations governing mobile homes by approving a motion to allow the temporary use of them in back gardens. The motion was put forward by Lucan-based Ruth Nolan, now a former councillor. “I put forward the motion quite reluctantly – but this is what we had to resort to due to the lack of housing,” she says. “We found a lot of people were living in mobile homes at the back of their parents’ or grandparents’ houses, and we wanted to ensure they didn’t have to do so illegally.”

Most of Farrell’s customers who purchase a used mobile home for full-time use spend €10,000-€20,000. Jeff Collins bought a mobile home from a different dealership for €19,000 to place in his garden. Despite the onset of cold weather, Collins, his wife and their 15-year-old son moved into the mobile home earlier this month and intend on spending the next year there while they are knocking down a poorly insulated 1960s bungalow and building a 3,500sq ft, A-rated home in its place.

“Initially, my wife’s reaction was ‘good Jaysus’, but now she’s delighted because she can’t get over how warm and cosy we are,” Collins says. “I am as happy in the mobile home as I would be in the house. It’s like living in a two-bed apartment. I have a 65in plasma TV in the corner and there’s broadband. Our dealer said demand for our model of mobile home is so high that we should get the €19,000 back when we sell it in a year. If you were looking to rent any family home in Dublin, you would lose €24,000 a year.”

These days, mobile homes are a far cry from the stereotype of spending a childhood holiday in a damp tin can with nothing to do but play Monopoly. For €92,000, you can pick up the 2020 model of the ABI Beaumont. This boutique hotel-style, cappuccino-coloured mobile has a set of French double-glazed doors to the front and a condenser boiler for the gas central heating. The living area is fitted with two free-standing Chesterfield-style sofas and the dining area has a free-standing table and chairs.

Mobile homes are less maintenance than a bricks-and-mortar holiday home and offer a more social lifestyle, says Tony Connell. He and wife Sheila have owned five different mobile homes on the same spot at Ardamine Holiday Park since 1997 and spend weekends and a couple of weeks there for six months of the year. “We pay €2,500 a year to the holiday park, and they look after everything, so there’s no maintenance,” the 58-year-old says. “Dublin is for making money but the mobile home is for fun. The minute I get there, the stress just lifts off me.”

At 546sq ft, the couple’s latest three-bed mobile home is the size of an apartment and has a washer-dryer, dishwasher, triple glazing, a deck, en suite master bedroom and Sky TV. Their adult children love the lifestyle so much, their daughter intends to buy one next year and their son bought one in a nearby holiday park last summer. “All of us love the mobile life,” Tony says.