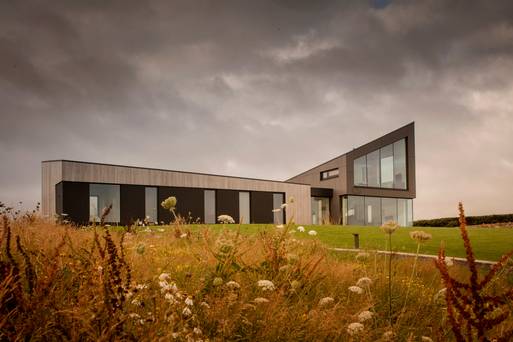 A striking house in Co Down is in the running to become Grand Designs House of the Year and will be featured on the Channel 4 show.

Maison Wedge in Killinchy, designed by BGA Architects Ltd, is positioned just below the hill ridge line, giving it expansive views along the Strangford longshore of drumlins, sea inlets and archaeology. Two elegant forms partially clad in timber make up the sprawling, low lying building, with parabolic roof forms that echo the rolling countryside of County Down. Architect John Lavery said the design for the 240m2 building originated from the idea of wanting to create a ‘sculpture object for living’.

The Northern Ireland home, built in April 2016, has been shortlisted for the Royal British Institute of Architect’s House of the Year award. Kevin McCloud and fellow hosts explore the nominated properties in the four-part series Grand Designs: House Of The Year. This week, McCloud and the Channel 4 Grand Designs team explore Maison Wedge and three other cutting-edge houses in with a chance of winning the prestigious RIBA House of the Year title – all of which have been fuelled by a desire to innovate and pioneer.

The winner will be unveiled in the finale of Grand Designs: House Of The Year.