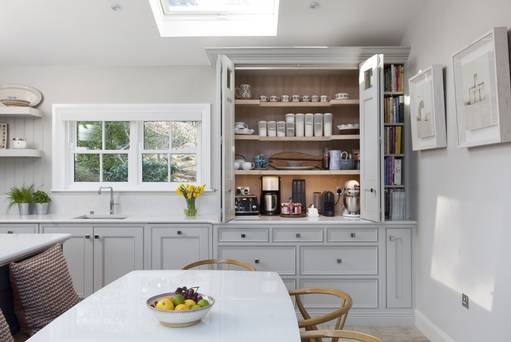 One of this year’s most divisive – and funny – television moments happened during the Across the Barricades episode of the new season of Derry Girls. As Fr Peter encourages the teens from Protestant and Catholic backgrounds to find their similarities, instead, a blackboard fills with more and more division. “Catholics love statues”, “Catholics love JFK” and then this gem: “Protestants keep toasters in cupboards”.

It lit Twitter up. Heated debates ensued, polls began. Do they really? Why would you do that? How bizarre. Except, I have some news for you: in contemporary kitchen design, it’s now very much de rigueur to request that your toaster be accommodated in a carefully-designed larder with bi-fold doors, integrated plug sockets and worktop. Yes, regardless of religious persuasion.

David Dempsey, designer at Noel Dempsey Kitchens and Interiors (noeldempsey.com), says: “Social media and the internet in general has had an impact on the style and features people ask for. A large three- or four-door pantry unit is almost standard these days. The larger pantry facilitates extra worktop space where you can hide your small appliances like toasters, mixers and blenders.”

Social media aside, other factors have led to the kitchen becoming the best room in the house. Take celebrity hook-ups. In the UK, luxury brand DeVol has worked with singer and designer Pearl Lowe to create a showpiece kitchen. Likewise, John Lewis of Hungerford collaborated with hip design duo 2LG for a kitchen that racked up column inches. In Ireland, while Cash and Carry Kitchens has done collaborations with TV chef Catherine Fulvio, we are slower off the mark to mine the celebrity hook-up, but thanks to the proliferation of images on social media, the cachet rubs off anyway.

Then there’s the environment. Where cars were a means of peer-based one-upmanship, now it’s kitchens. It’s not really cool to brag about horsepower when the planet’s going down the toilet and anyway, we’re all moving to electric: the Government’s target is that 10pc of all road vehicles – or 230,000 vehicles – will be electric by 2020.

So the heart of the home is where we are investing. “Quality is the most important element,” Dempsey says. “You could have a great kitchen design that works practically but if the quality isn’t there then the lifetime of the kitchen can be compromised. We invest heavily in our core components such as sheet materials, hinge systems, drawer runners and hardware. These are the basic elements that determine whether a drawer or door will open and close for 30 to 40 years.”

And our kitchens have changed as our lifestyles have altered. “We’ve seen a trend towards separating the utility and laundry rooms due to the rise of heat pumps and underfloor manifolds,” Dempsey says. “Raising your washing machine and tumble dryer makes it easier to access and opens up space for laundry baskets below.” That’s smart thinking, and so is what’s coming next, especially if you live in a small space or have a large open-plan kitchen-diner.

“The ‘hidden kitchen’ is becoming more popular than ever,” he says. “This is where you hide all of your appliances, including ovens, behind tall doors which then open and retract to pockets on either side.” Watch this space.