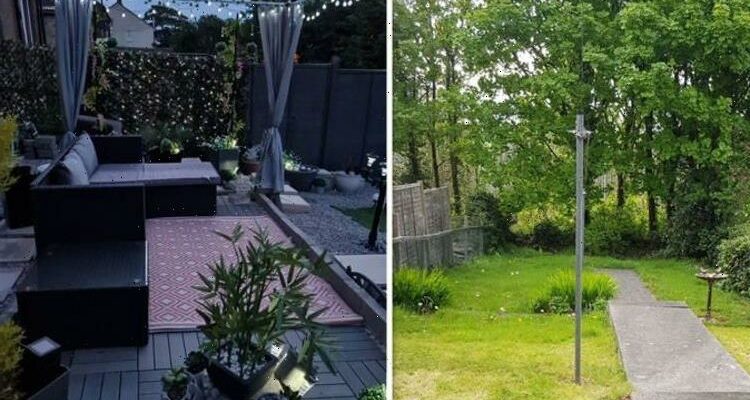 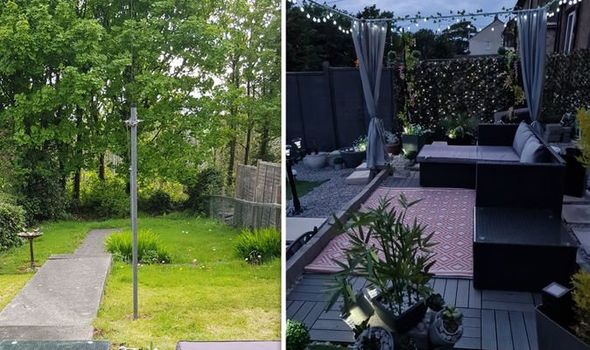 Deborah Williamson, 49, from Cumbria told money-saving community LatestDeals.co.uk that she had wanted to makeover her garden for ages but didn’t know where to start. The homeowner knew she wanted a “low maintenance garden” after she was diagnosed with degenerative spinal conditions which require surgery. Deborah, who is also a key worker, was inspired by gardening expert and lead presenter of ITV’s Love Your Garden, Alan Titchmarsh.

She said: “I think Alan Titchmarsh is amazing in what he does with garden makeovers so he was an inspiration.”

To kickstart her project, Deborah decided to split her garden up into four stages, sketching drawings of her ideas like decking, a pergola, fire pit, arches and lights on paper.

Once her ideas were sketched out, she wrote exactly what she needed next to each sketch before setting a budget of how much she thought it would cost.

Next, Deborah started shopping around to source her materials.

However, the homeowner ran into a stumbling block after she found some materials were sold out during the pandemic.

She explained: “The patio was originally going to be wood, but then there was a shortage, so I had a look on Amazon for alternatives.

“Composite decking tiles caught my eye, so I decided this would be a good option.

“This was only the start of my shopping so I would be able to save money and shop some more, all the time remembering my budget.”

Shockingly, Deborah had been quoted £7,500 for her top decking.

“Needless to say, I wasn’t going to pay that price,” she added.

So instead, she began fashioning her own using shed base boards, a membrane, both from Amazon, and the decking tiles.

The shed base boards were both “sturdy and easy to put together” and cost Deborah only £45 for eight.

She bought three boxes in total, getting five percent off, which cost her a total of £128.45.

She also bought four lots of the 25-metre membrane from Amazon for £23 each.

The 49-year-old also bought her pergola from Amazon which she snapped up for just £93 thanks to a money off coupon.

The cabana she has was fashioned out of an old gazebo she had for over three years.

She then used old lights, some ivy she had intended to use for another project, four shower curtains and tie backs to create the look.

Deborah’s next plan was to raise and level off the top part of the garden using paving slabs.

She managed to bag a bargain from her local B&Q who were selling travel and sand for £36 a tonne.

The homeowner said this was the “biggest expense” because she bought 13 tonnes of gravel and three tonnes of sand.

“The gravel I used was limestone, I got the 10mm variety for most of the garden as I wanted a soft look.

“Twenty millimetre gravel was used at the top of the garden to add a bit of character.

At her local builders’ yard, Deborah picked up breeze blocks and cement.

Deborah said this was the “longest and toughest” part of the makeover.

She said: “I built walls for a raised mini garden, rendered the wall…when it was finished I just couldn’t believe what I’d achieved.

“I made wooden lights out of pallets that I got for free from Facebook Marketplace, and then got to work on the plants and flowers.

“I picked up seeds and bulbs which ranged from 25p each to three bags of bulbs for £5.

“In total, I spent £12.25 on these supplies. I made plans for the plants I wanted next year with a greenhouse from Wilko which cost just £12.

“I’ll have a go at growing vegetables in my raised beds which were also made out of the free pallets.”

The project took Deborah 15 months to complete but there’s still more she wants to add to the space.