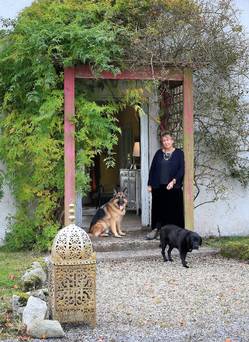 ‘I don’t have a ‘style’,” says designer Lizzy Van Amerongen of her approach to interiors. “I buy things because I like them and then I find somewhere to put them – that’s a philosophy I suppose.”

Yet the interiors of her five-bedroom home, Knockullard in Carlow, have a very distinctive style. Nothing too shiny or new-looking. Maple floors that Lizzy bleached herself. Acres of brightly coloured rugs from her trips to Morocco, a favourite place. French-style chimney pieces and windows. And highly textured fabrics and finishes.

But most of all it’s the colours that you notice – buttercup yellows, terracotta, candy pinks, deep red and pastel blues and greens.

“I’m not really conscious of why I do something. You just like a colour, don’t you? I also tend to see what’s in the paint pot and then re-use that. I’ve just painted the sitting room and it seems to be yellow,” says Lizzy.

Before Knockullard, Lizzy had lived in and restored the six-bedroom Old Rectory at nearby Fenagh, which she sold in 2004 to artist Michelle Sweetman, “under condition that she become my friend – and that I keep the bath.” The bath in question is a wonderful cast-iron Victorian original that now sits in Lizzy’s en suite.

“I was supposed to be downsizing,” she says now of Knockullard. “I wanted to build somewhere modern so I got Jeremy Williams [the late architect and artist] to design me a house. And I said I wanted a Victorian folly and he did the most beautiful, beautiful drawings but they didn’t translate from drawing into real life.”

In the end, she decided to design and build the house herself – she had trained as a graphic designer in her twenties – with input from architect Denis Looby who helped with the windows.

“A friend said to me, ‘You’re bloody stupid, it’s going to take you two years’. I love a good challenge and I said, ‘No, it’ll take me six months’. And so I got really stuck in and six months later we were in.

“But I did have to sleep with all the wood for the building stacked up next to my mattress on the bedroom floor. If I didn’t get up quick enough in the morning all the chippies would be in there.”

The result is charming. The five-bedroom new build has the proportions and grandeur of a Victorian house but the comforts of the 21st century. “It’s basically two rectangles that cross,” says Lizzy, in her understated way.

Having a light-filled house was a priority for Lizzy. There is a large bay in the open-plan dining room/kitchen on the south-facing side. French doors open out of the dining room onto a south-facing verandah where wisteria and roses are threaded up the columns. Recently Lizzy hosted a fundraiser for the charity Legacy of War, which her daughter Peggy is involved in, and they set up dining tables the length of this terrace so guests could eat al fresco and enjoy the views.

The dining room has polished concrete floors and a large fireplace bordered with granite sets. There is a huge utility room and pantry off the open plan kitchen/dining room and a guest WC. Lizzy’s workroom is accessed off the utility room. Here she crafts wondrous lampshades of pheasant feathers and handbags of cowhide and fabric.

“My sister,” says Lizzy, laughing, referring to Vivienne Guinness, editor with Lilliput Press, “describes what I do as ‘sticking things on’.”

Vivienne also had an input into the design. The large sunflower yellow room was originally intended to be three separate rooms. “But my sister asked me why I needed three rooms,” says Lizzy. “I couldn’t answer. So I took the walls down.”

The sitting room has maple floors and a Godin wood-burning stove inset into a fine period fireplace, as well as French doors out onto the terrace. The front door opens directly into this room and stairs lead from here up to the first floor.

The ‘posh room’ is a drawing room with long windows on three sides and a Victorian fireplace which like many of Lizzy’s fixtures and fittings was a salvage find.

The first floor has five bedrooms, including an enormous master suite with views over the gardens and gentle Carlow countryside. There is a dressing room area as well as a large bathroom with a clever Moroccan-style walk-in shower.

A balcony runs much of the length of the first floor. Currently the only access is from the windows, and prospective buyers might wish to knock through French doors.

All the bedrooms are doubles, three are large – one is triple aspect with a marble fireplace – and two are slightly smaller. There is also a family bathroom.

The property comes with a large workshop or studio, where Lizzy says she does more “sticking”. There is an outside stairs leading up to a self-contained apartment with country-style fitted kitchen, bedroom with en suite and living room. The apartment has obvious rental potential, either as a fulltime let or as an AirBnB property catering for guests attending weddings at Borris House, or events such as the Festival of Writing and Ideas or the Carlow Garden Festival.

The family – Lizzy has two daughters – grew up with horses, and both girls enjoyed showjumping as children. Molly is now an artist living in London, but daughter Peggy became a well-known showjumper. Lizzy currently keeps a brood mare, an old pony and a two-year-old at Knockullard.

In fact, the property would be ideal for anyone interested in a small equestrian venture or stud farm. There is an American barn with six stables and a tack room that is fully serviced with electricity and water. In addition, there is an all-weather sand manege, seven good-sized railed paddocks, all in grass. The three-span hayshed currently houses one of Lizzy’s biggest pieces of ‘sticking’ – a truck converted into a mobile home complete with shower and wood-burning stove. The cab is painted pink and decorated with shells.

Lizzy’s creativity has overflowed into the 27 acres of grounds too. The terrace has views over a large man-made lake. “It was a ditch,” she says, “and we dug it out and dammed it so it still flows.” A rose-covered arbour leads down to the lake, while elsewhere there is a small orchard, and a vegetable garden.

Knockullard sits in the Barrow valley, with Mount Leinster in the background and the village of Borris only 5km away, where the restaurant at the Step House is a favourite with walkers. Bagenalstown is 8km away, while the M9 is accessed at Leighlinsbridge about 10km drive away. Dublin is 70 minutes drive, while Kilkenny and Carlow are roughly 25 minutes away.

There are plenty of options for gourmets with Michelin-starred Campagne in Kilkenny city, the Lady Helen at Mount Juliet and The Butcher in Kilkenny. While closer to hand there is Sha-Roe in Clonegal, and the Birdcage Cafe in Bagenalstown for sandwiches and cake.

Knockullard comes to market this week with an asking price of €795,000. Lizzy is keen to take on another project and possibly, this time, she may actually downsize.

Viewing: By appointment only