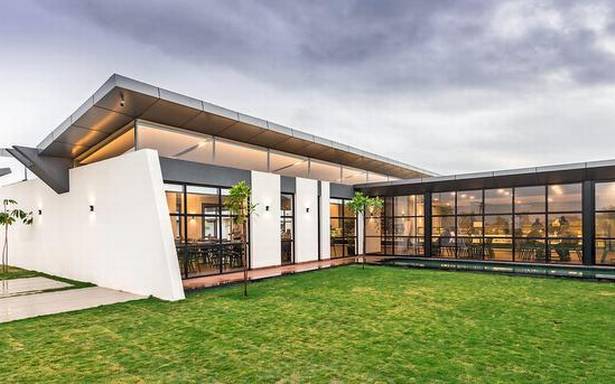 Functional, utilitarian, decorative… the uses and applications of metal in construction are manifold. By Nandhini Sundar

Whatever be the type of structure opted, metal is an integral part of it, albeit in a varied form depending on the design and material use. This is not merely so for contemporary buildings but for historical structures too, featuring in different forms based on the specific need. Metal has its own unique beauty and character that stands out when used as a decorative element in a structure.

Metal features not only as a structural component or decorative element in a building, but also as a functional or utilitarian factor such as the traditional lead water pipes, tin, zinc roofing sheets, aluminium window frames, to name a few. Copper, bronze, brass, stainless steel likewise find their due place in buildings in various forms and uses.

Prior to the industrial revolution, mostly timber, stone and lime mortar were in use, with metal confined to ornamentation. This altered dramatically after the industrial revolution, especially with cities witnessing a meteoric rise in size and requirements. Interestingly, with greater infusion of metals into the structure, the large load bearing walls became a feature of the past, permitting steep vertical growth of structures.

Metal structures then came up not just to facilitate sheds and warehouses but spectacular commercial spaces, even residences. The Eiffel tower is a classic example of new age materials, design and construction. So is the Louvre in Paris with its wrought iron roof. Iron columns likewise feature in the House of Commons as well as in many 18th century churches in London.

The choice of metal in contemporary structures not only permits a larger vertical expanse as well as more spacious interior spaces, given the thinner walls replacing the erstwhile thick load bearing walls, but also a larger span sans multiple columns in the interior spaces. Added to this is the sleek look of the finished structure as well as the easier, faster modes of construction compared to the conventional masonry work.

Says architect Swapnil Valvatkar of Collage Architecture Studio, “Opting for a metal structure permits a column-free large span in the interior spaces, the structural steel members serving as decorative elements, which can complement a contrasting play of warm wood in the interior space”. In one of his restaurant projects, Valvaktar, along with his team, opted for a steel and glass structure to house a dine-in facility that redefined the concept of the ubiquitous Darshini.

“The seamless connect of the interiors with the sprawling greens of the landscape is achieved through the option of sleek metal framed glass walls, tapering walls, and inverted sloping roof, combined with the contrasting warm hues of a terracotta flooring”, he elaborates.

While metal has a significant place in structures, ancient and modern, their presence as a decorative element prevails in equal measure in both traditional and contemporary spaces. A look at some of the exquisitely carved wooden doors of the Indian temples and palaces will corroborate this. The presence of metal on these massive doors was not merely as elaborately patterned large hinges and bolts but also as decorative motifs on the carved wood surface to enhance the richness of the mammoth entries.

A view of some of the wrought iron railings, jaalis, outdoor furniture of the buildings, especially in the Colonial period, reveals similar functional as well as decorative presence of metal. Ornamentation also prevailed in the form of exotic clocks and large chandeliers that were housed in these Colonial bungalows.

Cut to the contemporary scene and presence of metal is equally strong as both functional and decorative element. Not only exquisite wrought iron furniture is sought to decorate an interior, metal also features as exotic art in contemporary interior as well as exterior spaces. Interestingly, this metal art also finds its presence in ingenious piecing together of scrap metal pieces, the evolving piece either serving as a highlight window or as wall art in a large interior.

Be it as a functional element, decorative piece or merely infused into a structure to address specific requirements or even breathe a unique language into a space, clearly metal is here to stay.