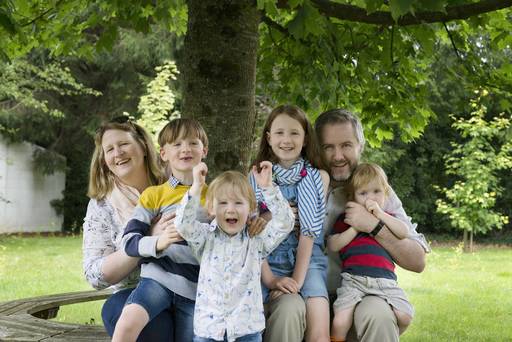 For most new homeowners, the joy of buying a house that is only two years old is that little or no work is needed when you move in. Sam Hynes and her husband David McCormack were not those homeowners. The couple bought Summerstream House in Summerhill, Co Meath, in February 2009 and were happy with their lot for a couple of years. But in 2011, when Sam was pregnant with their second child, they got the renovation itch and set about redoing the house that had been built only two years previously.

“We moved into a mobile home on site for a few months,” recalls Sam. “We completely redid the downstairs to install underfloor heating and put in new floors. It was a tough time with a 16-month-old and me being pregnant. Jessie liked to disappear a lot and we’d often find her gobbling tomatoes in the polytunnel. She was an early walker and I was heavily pregnant and could barely keep up.” The floors caused the biggest headache in the project. Sam and David had a good idea of what they wanted but, because of the underfloor heating, their choices were limited.

“Solid wood planks on underfloor heating can warp and don’t transmit heat well,” says Sam. “David and I have always loved parquet flooring and herringbone in particular, so we chose herringbone oak for the ‘adult’ rooms to the front of the house. Each piece of the herringbone is quite small so there is no risk of warping, and the warmth of the floor both physically and visually really makes those rooms feel so cosy.” The couple wanted something special in the hall so copied a floor from a hotel in Lake Como where they got married. It’s a basket-weave pattern with the same oak pieces from the herringbone in the sitting room for the framework, and squares of maple for the inlay. “Each square had to be cut on site, one by one, to ensure they fit,” says Sam. “It took weeks, and as winter was approaching, the cutting had to be done in the house and there was sawdust everywhere.”

The floors in the ‘big room’ at the back of the house are engineered wide planks, while in the sun room, or play room as it is now, the colour is a reclaimed-oak look as it doesn’t show up the dirt and scuffs. Other additions to the house included solid wood shutters on all the windows, a new utility room, new solid fuel stoves and oak bookcases for the study. The house has 3,200 sq ft of living space which includes a sitting room, study, kitchen/ dining/ living room, utility, sun room and guest wc downstairs. Upstairs are four bedrooms, all with en suite showers, and the main bathroom with a free-standing bath.

There are now four children, Jessie (9), Lex (7), Nicolas (4) and Max (3), so the house has been adapted to cater for them. “I like the house to be playful for the kids so I painted the murals in their rooms myself and we had the sunroom as the playroom, which leads directly out onto the balcony so they can go out and play any time they want,” says Sam. And the fun doesn’t end there for younger family members: the garden has a jungle gym and a 25-metre zipline.

The open-plan area at the back is where the family spends most of the time. “In classic country fashion, the patio doors were our main entrance for the summer,” laughs Sam. “We ignored the front door. With the woods behind the house, we’re never short of birdsong and the courtyard is completely private.”

In 2011, Sam and David planted apple and pear trees in the paddock, which are now laden with fruit. “I’m a big believer in a garden making a house into a home and we planted a copse of silver birch, weeping willow, white hornbeam, sycamore and four different maple trees, one for each of the kids,” says Sam. “I will miss the garden just as much as the house, if not more.”

Sam and David got planning last year for a stable yard-type shed in the paddock with space for a garage, workshop, gym and games room. There’s a stable block on the grounds already. The family has recently moved to Howth to be closer to David’s parents. “I’m amazed at how long it takes to get anywhere in Dublin,” says Sam. “It was easier to get to shopping centres from Summerhill. It’s the best of both worlds.”

Summerstream House is for sale for €875,000 with Loman Dempsey.