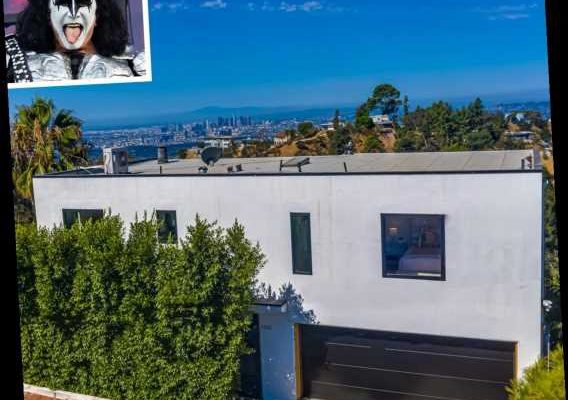 The 71-year-old KISS founding member has officially sold his four-bedroom two-bathroom split-level California home for $2 million. PEOPLE reported that the property was first listed for $2.2 million in August, with Lisa Young and Kennon Earl of Compass. It was later removed and then relisted for $200,000 less, according to real estate records.

The single-family home was built in 1968 and is described as a "secluded celebrity retreat" located on a gated private road at the top of Laurel Canyon in Los Angeles. The home features seemingly endless views from the Hollywood sign and Griffith Park Observatory to Santa Monica and the Pacific Ocean.

The rocker has owned the home for over seven years, and records obtained by the Los Angeles Times show he paid $1.45 million for it back in 2013. The three-level spread has an open floor plan that includes two living spaces across 2,345 square feet.

Listing images show outdoor decks on all three levels of the house, as well as good-sized bedrooms, with one featuring a cozy built-inreading nook. The property's two bathrooms and two kitchens have also been updated with luxury touches including Carrara marble and stainless-steel appliances. Last March, KISS was forced to postpone the rest of its 2020 farewell End of the Road tour due to the ongoing coronavirus pandemic.

During an appearance on Good Day L.A., Simmons revealed that the band wouldn't return to the stage until the health threats disappeared, sharing, "We're gonna go back once it's safe, once there's a cure. We would never put our fans in danger, or ourselves."

In October, PEOPLE reported that Simmons was looking to sell his extravagant seven-bedroom Beverly Hills mansion — which he's owned for over 40 years — listing it for $22 million with Douglas Elliman agents and Million Dollar Listing stars Matt and Josh Altman.

The palatial 16,000-square-foot estate features several amazing features including a regulation tennis court and a 60-foot water slide. It's situated on two acres on Benedict Canyon and is hidden away behind lush greenery, creating a very private setting.

Later in October, Simmons told Architectural Digest that he planned on moving out of California due to the state's taxes.

"I am moving our family to a state that is much more welcoming. Washington state. Where there is no income tax, no local and state taxes. Federal taxes are enough," he told the publication.