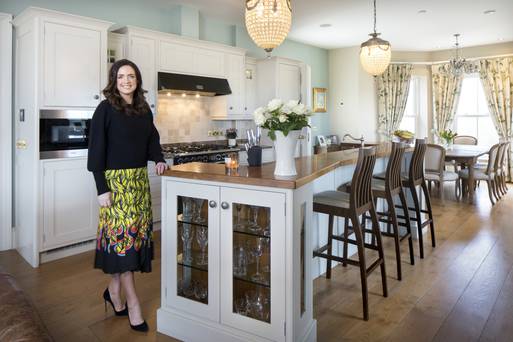 New Year’s resolutions for 2019 are a distant memory for most of us, but there is one woman in Ireland who is following through on hers – all 48 of them.

She will continue to do so until December, and more than likely will achieve a good result. Maybe it’s because that woman, Ramona Nicholas, entrepreneur and former dragon, calls them goals rather than resolutions. Or maybe it’s because it’s something she’s trained herself to do since her teenage years – whatever the reason, Ramona’s goal-oriented lifestyle has helped the glamorous entrepreneur enormously on the road to success.

And what a success. Ramona is joint managing director with her husband, Canice, of Cara Pharmacy group, which encompasses 16 stores in the north-west; they also have Abbey healthcare, a Dublin-based company, which supplies care homes with medications for their patients, and she’s taken time off over the years to take part in RTE’s Secret Millionaire and Dragon’s Den. She’s also won many awards, including the Women Mean Business Entrepreneur of the Year award in 2014.

Pharmacies were not in the young Ramona’s family background – she grew up on a small farm in Ardboe, Co Tyrone; her dad was a plumber and her mother was a teacher – but she always knew that she wanted to work in them. “I was lucky, I knew from the age of about 11 that I wanted to be a pharmacist. I don’t know if it’s because I loved the smell of chemists’ shops, or if it was the idea of having a shop,” she says, adding, “I love being a pharmacist, but it’s actually the retail end of it I love now.”

As it happened, chemistry came very easily to her, but her education wasn’t a smooth path until she developed her system around goals. “I didn’t get the GCSEs I expected. That gave me a jolt, and I think it was while doing my A-levels that I started this whole goal thing,” she muses. “I didn’t do poorly in my GCSEs – my parents get annoyed when I say I did poorly – but I didn’t get what I expected. So I started this whole time-management programme with an older cousin, and I was super-prepared for my A-levels, and I sort of carried that through. My A-levels were fine, and I set myself a goal that I wanted my own shop at the age of 25.”

Her A-levels gave her entry into Queen’s, and she adored living in Belfast during her years studying there. It helped that she met Canice, who was also studying pharmacy, although he was ahead of her.

“It’s a long story – we actually met when I was 16. Canice is older than me,” the bubbly brunette volunteers, going on to explain: “Where I’m from, the land is very flat, and where Canice is from, the land is very hilly. Canice’s father is a farmer as well, and he had rented land from our next-door neighbour. My father came home one day and said, ‘There’s a boy out there who’s doing pharmacy’, so that was how I met Canice,” she says.

She adds that while she had fancied him, and all her friends used to slag her about him, they didn’t met again before college.

“He was known to my friends as ‘pharmacy boy’,” she says. “We didn’t keep in touch. We actually met again when I was in second year, in the library in City Hospital, and I’d sat down beside an empty seat. The person had got up to go to the toilet, and when he came back, he tapped me on the shoulder and said, ‘Do you remember me?’ That was Canice.” That was 1996, but they didn’t get together immediately. “It took a few months, but I succumbed then. Though I took my six housemates on our first date, just in case,” Ramona recalls with a laugh. “I wouldn’t even let him drive me home. They all got in the car with me. They were my best friends from school; they came along for a laugh. That story was told by one of them at our wedding. She’s now a gynecologist.”

Canice qualified before Ramona, and did all his work in the North. Ramona qualified at 21, and came south to Dublin for her first proper job, which she took up at Pharmacy O’Riada in Coolock. “I was managing that store and loved it,” she notes. “I managed four pharmacists and 25 staff. Then deregulation happened in 2000 – that meant anybody could open a pharmacy.”

Ramona wanted to acquire an existing business and deregulation made that more difficult. Up to then, she thought Dublin would be a long-term base, and had even bought a house near the city. Instead, she moved back north, taking jobs first in Ballybofey, then in Donegal town, and soon after, she was offered the opportunity of buying the Donegal shop.

Canice, meanwhile, had purchased a pharmacy in Bundoran. Because of their different skillsets, and because they were in a relationship, they decided to merge their businesses and call it Cara Pharmacy.

“That was 2002 – we weren’t even engaged. I always say it was the biggest risk of my life,” she says with a laugh. She adds that the sale of the Dublin house financed the Donegal shop purchase.

Ramona says she always knew she would end up with a big business when she found it hard with only one pharmacy in Donegal. “When I started off in Donegal town, I was dispensing only 11 items a day. I had been dispensing 400 a day in Dublin. I was like, ‘Did I make the right decision? Should I be in a bigger company?’ I knew straight away I couldn’t do the owner-management thing. So that was why we rapidly expanded to seven pharmacies within a year,” she says. They now have 16 pharmacies, with stores in Sligo, Leitrim, Cavan, Galway, Longford, and in the North. “I think in those days, we were so young we had no fear,” she says. “We never had a sleepless night.”

They’ve had crises – the downturn, problems with the HSE – but they’ve weathered them, and she credits their great staff with a lot of their success. “They got behind us during the recession, and I would never ask our staff to do anything we wouldn’t do ourselves,” she says. She adds that their customers were also very loyal. “Our customers are the most important, at the end of the day . If we didn’t have our customers…”

In addition, they acquired Abbey Healthcare in early 2017, a company that looks after hospitals, respite homes, and nursing centres in the Dublin, Kildare and Cork areas. They have 240 employees in total. Canice looks after the care-home business and all the financing and project management and procurement, while Ramona looks after marketing, operations and human resources, and their online business, which is all beauty and healthcare.

In the meantime, they got married in 2005, and they have two delightful children – Alex (nine), and Sarah, who will be three next month. Despite her busy life, Ramona took on the role of a dragon on Dragon’s Den over two seasons in 2013 and 2014, and she says she really enjoyed helping the budding entrepreneurs, while she learned a huge amount from the other dragons.

However, it was the role of Secret Millionaire in 2012 that really rocked her belief system, making her very aware of how lucky she is, and of the importance of giving back. “I was a basket case for months after it,” she says. “I realised that life doesn’t go wrong because you’re a bad person. I suddenly realised I could be homeless, if my business fails. Anything could happen.”

One of the positive results of that experience is that she and Canice are now hugely involved in charity, and one of the things they do is the annual Cara run in Bundoran; this year it takes place on March 8, and it’s in aid of Cancer Care West, Epilepsy Ireland, and the Make-A-Wish foundation.

The run starts right in front of their gorgeous home, which is facing the wild, windswept sea at Bundoran.

They built the house nine years ago from scratch, and opted for a neo-Georgian style rather than ultra contemporary because of the site. “It’s north-facing and the glass in a contemporary house would make it too cold,” Ramona says.

The house, which is four-and-a-half-thousand square feet, has many fine details, including a wonderful entrance hall complete with high ceilings, an open fire and a sweeping staircase. “The house is designed around the stairs,” she says. The hall furniture includes a grand piano. “I play. I gave piano lessons as a way of funding myself through college,” Ramona explains, adding that one of her goals is to learn again.

There are high ceilings throughout, giving the whole house a great sense of space. There are also many windows, which fill the house with light and which are all beautifully curtained. And the many restored fireplaces are a special feature.

There are reception rooms on both sides of the hall, including a double-sized room with a pool table for Canice on one end, and, on the other, a more feminine vibe – Ramona displays her collection of vintage tea sets, many of them gifts from her mother, on the shelving here, as well as some of her Barbie dolls.

They may seem to be an unusual item for a top business woman to collect, but the limited-edition dolls, including her Louboutin and Vera Wang ones, are a good investment; they say that you should collect what you like, and Ramona has loved Barbie since childhood. “These dolls are unique, one-offs, we won’t see them again. I enjoy them – sure, I have all my Barbies since childhood,” she says.

By way of complete contrast, her office is full of books, mainly biographies and books about success, like Jack Canfield’s The Success Principle. “I must have read that a million times,” she says.

Like most, Ramona’s family tends to spend most of their time in the kitchen/ dining/playroom, but Ramona likes to escape, too, to her elegant bedroom complete with dressing room and en suite bathroom.

The more frivolous side of Ramona is evident here – there are a lot of Tom Ford lipsticks and shelves and shelves of shoes – but by the bedside today sits a notebook with this year’s goals outlined – one per page. “I carry it around in my handbag and read them daily,” she says. “You have to write in the positive tense as if you’ve done it. You have to imagine and visualise as if it has been accomplished, you have to do visualisation around it as well.”

Ramona’s goals for 2019 are obviously private, but if past goals included a lovely husband, gorgeous kids and and a delightful home, then they’ve certainly been achieved.