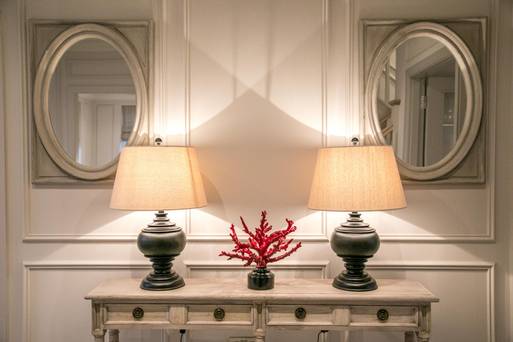 When is a showhouse not a showhouse? According to former estate agent turned interior designer Elaine Jerrard, even the best-dressed and most glamorous showhouse is not the one that gets you thinking about putting down a deposit.

As she puts it, when it comes to successful showcasing, the best buy-me properties are the ones that have you imagining yourself living there.

As showhouse designer for Clairville Lodge in the north Dublin coastal town of Malahide, Jerrard is clearly on to something. No sooner had she fitted out the first four-bedroom showhouse, at a spend of €100,000, than it was sold. On the back of this, the developer Maybury Properties asked her to do a second, a five-bedroom house called Berkeley. Now it has just gone sale agreed at €1.2m, including contents, fixtures and fittings.

From selling houses to designing houses that sell, Jerrard says her move was a natural progression after working for 15 years as an estate agent with Sherry FitzGerald. She left in 2008, using the property crash as an opportunity to explore her passion for interior design. Having built up a portfolio of clients, three years ago she set up her own company, Elk House Interiors, of which she is creative director. “I don’t like the term interior designer, but I can’t think of an proper alternative to describe what I do,” she says. “I don’t just decorate a room with pretty things. I strive to turn a house into a home, or at least provide the backdrop that allows people to see how they can make it their own.

“When you’re selling a house, pictures paint a thousand words. A good agent will organise the best interior shots to maximise the sales potential, but I wanted to be involved in more than that. My experience as an agent developed my knowledge of internal spaces, how they flow and function, which is at the heart of good design.”

Jerrard tries to learn as much as she can about her clients before embarking on a project. The needs of a young family who love the outdoors will be different from those of a single person who likes to travel and collect art, for instance. But designing a showhouse interior poses a different challenge; it has to appeal to as wide an audience as possible and attract buyers as yet unknown.

However, for Clairville Lodge, it was clear who the likely buyers would be. Situated between Portmarnock and Swords, Malahide is one of Dublin’s priciest suburbs. Its residents are reluctant to leave the area with its castle, schools, sports clubs and village hub, all just half an hour from the city centre.

From the outset, this development of 34 four and five-bedroom houses off Streamstown Lane, a five-minute drive from Malahide village, was bound to appeal both to local families trading up and empty nesters not necessarily downsizing, but moving to a modern, fuel-efficient house that they wouldn’t have to invest in upgrading, while staying in the area they know and love.

“I wanted to present solid backdrops that would work for both ends of the target market, a place where people could imagine walking in and hanging their hat,” says Jerrard. She used timber panelling on the walls with textured wallpaper and soft, muted shades broken up with splashes of colour. Patterns are echoed through wallpaper, artworks, upholstery and cushions.

Jerrard and architect Colin O’Donohoe of ODA Architecture worked together to create a classic contemporary look inside and out. From the outside, the modern structure features Edwardian elements like the multi-brick and painted plaster front and ornamental clay finials on the roof. Inside, a large entrance hall leads to the kitchen/dining room with family area and the garden beyond. Also on the ground floor are a living room, study, utility room and a guest wc.

“It’s important to have a big open-plan area where you can gather 20-30 people, but also have the option to withdraw to a more intimate space, which is why we have sliding glazed doors linking the living room with the family areas,” says O’Donohoe.

On the first floor are a master bedroom with en suite bathroom, three more bedrooms (one en suite), and a family bathroom. In the five-bed house the second floor contains the fifth bedroom.

At 2,498 sq ft the Chester has the same floor area as the Berkeley, but following feedback from Phase 1, the design was tweaked to allow for more storage space. The Chester houses range in price from €1.05m to €1.2m depending on location and orientation. To fit them out exactly as per the showhouse would set you back €100,000. That said, Jerrard is available to create a design to suit a buyer’s individual needs and budget.

Viewings are available by appointment with the agent.