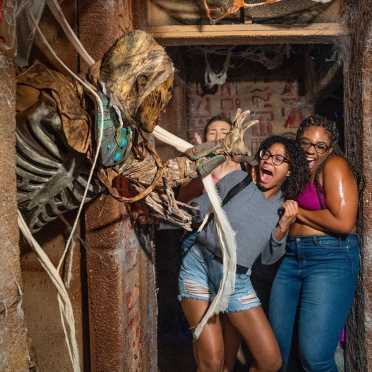 I’m not a haunted house person, or a horror movie person, or a Ghost Adventures person. I’m barely a Halloween person. When it comes to scary stuff, I am a lifelong and total wuss. I’m proud to say I can go to the bathroom in the middle of the night without flicking a single light on along the way, because I have only the faintest memory of that scene in the Sixth Sense (which was probably the last scary movie I saw).

So it was with great trepidation that I agreed to preview this year’s Halloween Horror Nights at Universal Studios Florida.

The annual event, which takes 14 months, 1,000 actors, and countless twisted minds to bring to life, is downright chilling. It transforms the friendly facades of rides that, during the day, are home to Minions and lovable green ogres into smoke-shrouded hellscapes full of, for starters, undead vikings and hungry zombies.

This year’s HHN (as its legions of fans have dubbed the two-month celebration of all things spooky), takes place on select nights from September 6 to November 2 at the Orlando resort. It’s also 80’s themed, and to my delight and surprise, featured several things I’m not afraid of at all — like Ghostbusters, retro video arcades and the adorable kids from Stranger Things.

RELATED: Get a Sneak Peek of the Newest Ride in the Wizarding World— and Harry Potter Stars Tom Felton and Rupert Grint’s Reviews!

It also contained plenty of things I’d hoped to never encounter: most notably roving live actors, known as “scareactors” (rhymes with “characters”), trained to sneak up on you when you’re innocently passing through one of the park’s five elaborately themed “scare zones” — or, if you’re foolish enough, when you enter one of its ten, incredibly immersive haunted houses.

Luckily, in addition to convincing a much braver friend to join me on my trip, I also got some scoop ahead of time from Lora Sauls, Universal’s Manager of Entertainment Creative Development and a 20-year veteran of HHN, about how best to survive… and how not to entice the zombies.

Here are some of her expert tips and some of my own, learned through experiences that will keep me from leaving my bed in the dark any time soon.

1. Stay Off Your Phone in Scare Zones

When traversing one of the “scare zones” that cover most of the major thoroughfares around Universal Studios’ central lagoon, don’t be looking down. “That is the best distraction for the scareactors,” says Sauls. “They’re going to come after someone who’s not paying attention.” Instead, save necessary screen time for neutral areas, or as Sauls refers to them “little five-minute breathers” between scary stretches.

“If you look scared, the scareactors are going to come after you,” says Sauls, who admits they’re literally trained to do so. “You have to walk with confidence, stand tall.” I tested this method out of absolute necessity, and it’s true. I looked that blood-soaked prom queen right in the face and she passed me by. I grinned like I was hoping to find a chainsaw-wielding video game character, while constantly surveying my dark surroundings.

If you do get your phone out to film the characters sneaking around, fair warning, they’re also attracted to the spotlight.

“We train the scarer to attack and get back,” says Sauls. The technique also has a deceptively adorable behind-the-scenes name: “boo and scadoo.” Depending how dramatically you jump or flail during the “boo” portion, it’s possible you’ll make contact with a scareactor, but there’s no risk they’ll grab you or drag you off into the darkness.

The scare zone baddies are also taught “not to stalk people too much, especially on the street, where you have long paths where they could follow you,” Sauls notes. And if you scream loud enough, they may take the hint: “We say if people are really not feeling it, just get out of there and move on.”

5. Head for the Friendly Franchises

Before attending my first HHN, I took a guess that the two haunted houses I could probably handle were Ghostbusters and Stranger Things, and I was mostly right. While the Netflix series has gotten increasingly creepy — and in the case of season three, gory — it’s still a relatively wimp-approved experience.

Ghostbusters, even more so. I don’t particularly want to run into the Mind Flayer, but I’m not too worried about being surprised by the Jet Puff Marshmallow Man.

There are still jump scares in both of these houses, but half the time the character that leaps out is a good guy. Even through my fingers, I spotted Chief Hopper, Eleven and Dustin from Stranger Things and a slew of friendly Proton Pack-wearing ghostbusters spouting catch phrases from the films. Both houses are more about the fun fan-service and nostalgia than nightmare-inducing demons.

The Universal Monsters and Killer Klowns from Outer Space houses are tier two. That is, totally doable for the scaredy cat with a friend to hide behind, unless you’re deathly afraid of circus performers or classic villains like the Creature from the Black Lagoon and the Phantom of the Opera.

For the record, the houses I skipped were Jordan Peele’s Us, House of 1,000 Corpses, Depths of Fear, Graveyard Games, Nightingale’s Blood Pit and Yeti: Terror of the Yukon. My brave friend dubbed Depths of Fear and Blood Pit slightly less scary than the others.

I know this sounds strange, but if you go in enough of the haunted houses (I managed the four above), you’ll start to learn what to look out for: blind corners, suspiciously vacant openings in the walls, dark curtains. But a few of the houses hold a particularly chilling feature: statues. Beware of anything that appears to be an inanimate figure of a human. It’s probably a living one (or an undead one, as the case may be.)

Some of the haunted houses have statues that are just that, but a couple have rooms designed to mix live actors holding very, very still with props, and waiting for one to move makes for some of the most stomach-dropping scares.

7. Take Refuge at a Not-So-Scary Show

There are two live shows at HHN with multiple, free performances per night. “Academy of Villains” features hard rock music that even non-metal heads will know and enjoy, and performers with mind-boggling abilities, both freaky and beautiful.

The light-and-water show “Marathon of Mayhem” is completely PG and features projections of classic monster films and contemporary favorites (yes, more Stranger Things). Keep an eye out for Slimer making his way through the upper floors of the buildings around the lagoon during the Ghostbusters portion.

Or, in this case, Wizarding London. Should you really need a break from the terrors of HHN, you can always duck into Diagon Alley. The Harry Potter-themed land at Universal Studios has no scare zones or haunted houses inside. The worst you’ll find here is Borgin & Burkes.

Spoiler lovers, this one’s for you: If you really want to see inside the haunted houses without the slightest chance of a fright, you can take a totally safe, behind-the-scenes daytime tour. Choose either a three- or six-house guided tour for $80 or $130 respectively on top of park admission, and learn about all the artistry and effects that go into making them.

At Cabana Bay, one of Universal’s Resort Hotels, you can step into — and snap a great Instagram photo — an interactive recreation of the Wheeler family living room, complete with Christmas lights, from Stranger Things’ first season, and the iconic Scoops Ahoy ice cream shop, from Stranger Things 3. The scariest thing here is some flickering lights and Robin’s (Maya Hawke) white board tally of reasons “You Suck.”

I’m still by no means a horror lover, but I did come out of my first HHN with a new appreciation for the high of being scared out of your pants. “When you get scared you tend to laugh afterwards and it builds endorphins,” Sauls reminded me.

By the end of the night, I found myself lurking in scare zones, trying to sic scareactors on my well-intentioned friend. And while I may never make it into the House of 1,000 Corpses, I will happily face down a few boo-and-scadoo-ing spooks again.