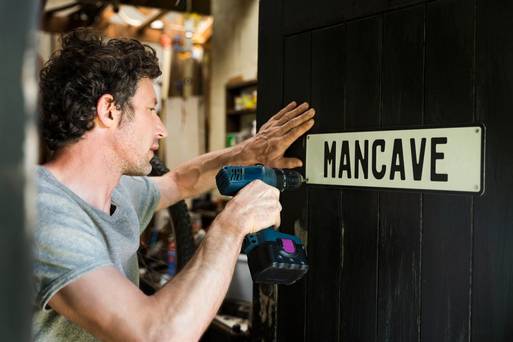 Grandad’s garage was a zone I loved to explore as a kid.

Like most men from then and now, Grandad had no say on colour schemes, furniture or soft furnishings for the house he lived in. Nor did he want to. He left “all that stuff” to Gran. The house was his wife’s sole realm to do with as she so pleased. And she did. But in the garage he could make a mess, spill oil, spume sawdust about and hammer away to his heart’s content. Because in the garage he was King.

To eight-year-old me, his garage was where the action was at – a hotspot for never-ending projects, inventions and experiments (think Wallace and Gromit).

For instance, there was an ongoing production line of grandad-invented ‘smokers’ – bellows devices with pointed flues that he fashioned from sheets of tin and leather.

These he loaded with lit, corrugated rolled-up cardboard ‘cartridges’. Squeezing the spring-loaded bellows blew out a steady jet of smoke, controllable in intensity via the bellows’ end. Perfect for his beekeeping hobby.

There was the walking stick production line – he had harvested blackthorn in woodlands from which he made shillelagh walking sticks, the traditional gnarly, hard-wooded variety with a rounded, rootball handle. These he trimmed, dried, stained and varnished before hanging them up to season in the garage rafters.

For a time it was a tobacco warehouse. He grew the weed in his garden, tied bushels of the leaves and hung them to dry in the garage.

For another stretch he had a manufacturing line going in wellington boot removers, a sort of timber grooved device he designed to help you take off mucky wellies outside the house without bending over or even touching them.

Not liking waste, I recall him fixing a straight lady’s umbrella grip to a kitchen spatula which had lost its handle. Another day he converted an old television set casing into a birdcage, just so there was something to watch on there again. There was a mousetrap with two seesaw mechanisms which dropped one mouse in a capture bucket whilst simultaneously priming the trap for the next mouse to arrive. Genius!

That was his garage. Other such man realms among older male relations and family friends included various other garages, garden sheds, outdoor workshops, lofts, greenhouses or attics.

But it’s a mistake to think of the traditional man space solely as a tinkering ‘handyman’ thing.

There’s a long history of shed-reliant men in the arts, for example. George Bernard Shaw wrote in a shed which he built on a pivot so that when the sun shifted in the sky he’d simply spin it around to face in the direction that suited him. The poet Dylan Thomas’s solitude shed so impressed the children’s writer Roald Dahl that the latter had his own writing shed built based on it. Today Dahl’s shed is indoors in a museum.

Such a ‘man space’ is in fact an essential part of male makeup and psyche. It fulfils the occasional need for what my grandad called ‘peace’ – a solitary space in which to think clearly upon life’s problems and challenges. Consider that if you saw a woman sitting alone at a bar counter staring into space, you’d ask ‘what’s wrong?’ Shedless men sit like that in bars all the time.

These days two factors are taking the man’s private retreat space from him. First comes the shrinking sizes of family homes, increasing use of apartments and the reduction in outdoor spaces for sheds and garages. There’s simply nowhere to put one.

Second comes changing attitudes amidst a renewed battle of the sexes. While women still have their say on every aspect of how the home is finished, furnished and presented; at the same time a man’s one space is increasingly being viewed in a critical light; as something of a frippery. Today if a man has created such a space, some will hold that it reflects a certain degree of immaturity.

A purpose-designed indoor male realm is now referred to as a ‘man cave’. Like man flu, mansplaining and manterrupting, the term finds itself slotted among the recently conjured derogatory ‘manterms’ – newly minted verbal coinage of an agenda from quarters that seek to assault traditional aspects of masculinity.

Women whose men are “caveless” at their behest should beware. A man without his one space (a cave if you must insist) is lesser equipped for solving life’s problems, for maintaining a contented mindset and, concurrently, a happy relationship. Especially in a domestic environment in which none of the space at all is of his realm.

Men Are From Mars, Women Are From Venus garnered huge acclaim as a marital aid when first published in 1992. It sold almost 10 million copies worldwide.

In its pages the relationship counsellor John Gray states that men and women are hardwired quite differently but that these differences were traditionally understood by both sexes.

Role changes in the 20th century scrambled this understanding somewhat with the result that disputes arise when each expects the other to behave like they do. For example, men’s expectations that women should act like men in the modern workplace or women’s expectations that a man should behave like a woman in his modern roles at home. Gray’s book highlights that women communicate more in a crisis whereas men communicate less. He concurs that it is vital that men, who are solution driven, be permitted to retreat to their “cave” to work things out.

Impasses occur in relationships when men don’t listen and when women prevent the man from taking that reflective solitary time out Gray asserts.

It’s something my happily-married grandmother fully understood: to keep him mankind, mannerly and mantrum free, getting a cave in is pretty much mandatory.