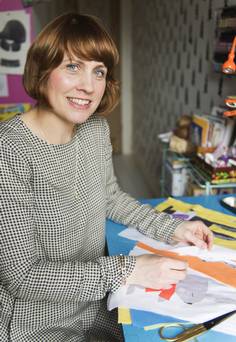 When fellow Antrim creatives Colleen and Glenn met through mutual friends a decade ago, they didn’t realise they had grown up just two streets away from each other. Nor did they ever imagine that the house they would buy together would be 10 minutes from that spot.

“After studying Art & Design at Belfast Met College for two years, I then went to Liverpool School of Art and Design,” says Colleen. “So when I moved home a few years later I knew of Glenn, who runs graffiti-based art workshops, but we had never actually met. We started dating and decided we liked each other enough to stick it out and tie the knot.”

And while the house they settled in needed work, there were a number of upsides. “We instantly liked it because it had a lot of space for our small budget, had some nice period features and was also so close to both of our families,” says Colleen. “Those things have proved invaluable since having kids.”

The three-bedroom house, which backs on to a park and is five minutes from Lisburn town, was built in 1880.

“I can remember lying in bed at night with the bed heaped high with blankets,” says Colleen. “You could honestly see our breath in the air, it was that cold!” Adding insulation was high on the list, along with central heating and draught-free windows. The chimneys also needed re-lining and the house needed a new roof.

That was seven years ago. Since then, there have been a lot of changes. Most importantly, the couple now have two daughters, Rose (five) and Nina (two).

The girls were the inspiration for her online soft toy and illustration business, Little Carousel – Colleen began to make soft toys to use up baby gros that Rose had outgrown. She invested in a sewing machine. Next came her own printed fabrics, and then her range of toys and prints. Now, however, she plans to focus solely on her charming book illustrations and prints.

The house itself is in a constant state of transformation. Every interior door has been stripped back to the bare wood and re-painted. The walls have also been stripped and re-plastered and there is new flooring in most of the rooms. They also removed an old Aga from the middle of the living room and replaced it with a wood-burning stove.

“It’s hard to top a roaring fire on a cold night,” says Colleen. “My husband is now obsessed with chopping and stacking wood to keep the fires going all winter.”

Next up was the kitchen, which Colleen says was the most difficult project in the house, particularly because Glenn took most of the hard labour on himself. “The room needed gutting, re-wiring, re-plumbing, re-plastering and a new floor laid,” says Colleen. “The kitchen then needed installing as well as painting, and Glenn did it all, aside from the kitchen installation by Ikea – as well as heading to his nine-to-five every day. Luckily we have a few plumbers and electricians in the family who could offer help.”

To capture maximum light and space the couple decided to go with large windows, stainless steel and white units and a marble top. They tiled the wall above the units with square tiles and made the opposite corner a built-in seating area with a dining table by two large windows, running the same wooden flooring throughout the kitchen and adjoining living room.

“I really wanted as few cupboards as possible so the room felt spacious and to force us to not buy, store and gather more than we absolutely needed,” says Colleen “The open shelving and decorative unit keeps the space simple, bright and clean but still feels homely.

“A lot of white emulsion went into this house, as it is not expensive and it always looks good! Only one room has a pale grey Farrow & Ball paint.”

One of the small bedrooms originally formed her studio, but as the business grew, the room became too small and she swapped the studio for the master bedroom. “It was a brilliant decision,” says Colleen, “as I spend all my days in here, in this work space and it is now such a joy to work in. I no longer feel squashed in, so it has definitely impacted on my creativity and motivation in a very positive way.

“The small room, now our bedroom, also works well with the change as it is a cosy snug to sleep in at night. Free from any other clutter or furniture, it feels more peaceful and relaxing.”

She has thought long and hard about their daughters’ bedroom, aiming to decorate in a way that will last through the various stages of childhood.

“They don’t stay in the nursery phase for long, I tried to save redecorating after a couple of years by creating areas for them now to enjoy spending time to play, read or draw. There is a little table and book area here, as well as a dress-up rail with costumes hung up and their jewellery, shoes, hats, crowns, etc. all there for them. They love it!”

For Colleen, a room needs to feel comfortable and work on a practical level first, before any other decoration is done. “A space fails if it ends up feeling cold or unrelaxing,” she says. “Over the years we have gathered things from our travels, art we love, things we’ve found or made which, in my opinion, has helped build a unique home that tells a little something about us. I don’t think I will ever tire of finding new beautiful art for a wall.”

And now, after seven years and their complete house refurb, does she ever feel inclined to move again?

“Maybe when the girls are more grown up, we’d enjoy a new challenge, but I’m not sure we would take on such an old property again. We would now love a mid-century property or something more modern with more open-plan living and lots of glass.”

The likes of Colleen Larmour

“I love the space, the fires, the garden, but I guess I love most that it has been our happy first home where we’ve had our children. A lot of happy times and memories made here.”

“It changes but right now it’s my studio space. I have a huge picture book collection that I’ve amassed over the years and keep here, as well as my daughters’ trunk of keepsakes since they were born. That first lock of hair, tiny painted hand prints…”

“I like to decorate with a simple, plain palette and add pops of colour to things that can be changed or moved around. I’m not comfortable with permanent bold interior choices as I like the freedom of being able to change things easily. I’ve wallpapered two walls but even this wallpaper has muted tones and patterns that are nature based.”