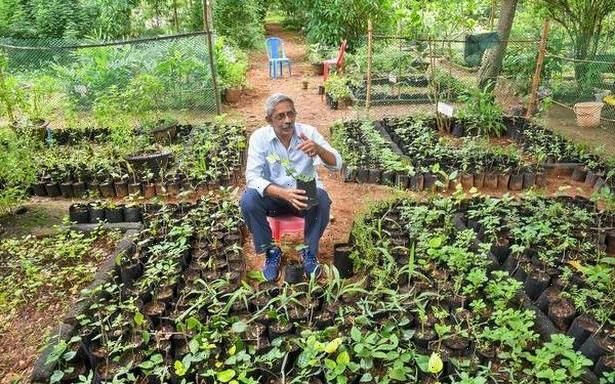 The half-acre nursery in the Biodiversity Park, has 50 species of herbs including some rare ones sourced from across the country

If there is one lesson that the pandemic has taught everyone, it is the importance of building immunity and maintaining good health. As a result, people are increasingly moving to a lifestyle that includes native herbs in their diets. With an aim of encouraging every household to develop an herb garden, the Visakhapatnam-based organisation, Dolphin Nature Conservation Society Development (DNCS), has created a project called ‘Herbal nursery to promote herbal gardens’ in the Biodiversity Park within RCD Hospital premises. As part of the project, the Biodiversity Park has a dedicated half an acre with herbal plants, including some rare ones, which were procured from across the country. The herb nursery is one-of-its-kind in the region.

“Fifty species (40 herbs and shrubs and the remaining trees) are being developed in the first phase,” says M Ram Murthy, founder of DNCS and the Biodiversity Park that presently houses over 2,000 species of plants including 300 species of medicinal plants in a three-acre spread. More than 1,000 saplings of about 40 species are being reared in the first phase. These will be given to 25 organizations across Visakhapatnam district.

“These medicinal plants have minimum toxicity and are native to India. They have the potential to enhance immunity, against infectious diseases and play an important role in building a healthy immune system,” says Ram Murthy.

National Medicinal Plants Board, Ministry of AYUSH (Ayurveda, Unani, Siddha and Homoeopathy), Government of India, has documented many medicinal plants and their uses in combating diseases and boosting immunity, under the segment Plants for Health & Prosperity . Many of these species are a part of the herb nursery. These plants contain bio-active compounds, which are known to be rich in antioxidants, vitamins, proteins, carbohydrates, dietary fibres, amino acids, minerals, alkaloids, antiviral and antibacterial phytochemicals.

In the recent times, there has been an indiscriminate increase of collection, use and export of medicinal plants throughout the world. This has resulted in many medicinal plants threatened with extinction. “A case in point is the Sarpagandha, which is today threatened because of over exploitation and lack of awareness,” says Ram Murthy.

The Biodiversity Park is open in the morning hours during week days.