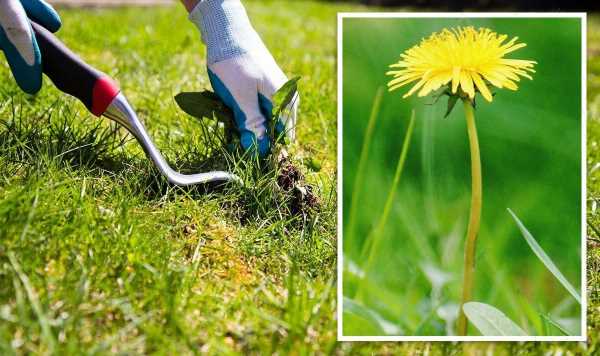 Gardening expert on how to keep your garden free of weeds

As the hot weather approached, green-thumbed Britons are heading out into the garden to get it prepared in time for the summer. But though the spring promises an abundance of fresh blooms, it also brings with it the risk of new weeds emerging on your lawn.

Here are five common spring-flowering weeds which may appear on your lawn this season.

Celandine, also known as lesser Celandine or figwort, is a grass weed that typically flowers from early March through until April.

According to experts from Lawnsmith, this is one of the “first weeds” to appear on the lawn in spring.

You can identify it as a low sowing plant with waxy spade-shaped leaves which grow from a tuber.

The weed produces bright buttercup flowers. Thanks to its yellow blooms, the weed may look rather pretty, but it can eventually colonise large areas of the lawn if not controlled.

The good thing about Celandine is that it has a fairly short lifespan, typically dying off by May before vanishing until the following year. However, this means if you do want to treat it, early spring is the best time.

According to Lawnsmith, the best way to do this is by “digging the small tubers out” completely. However, this must be done with great care.

The Royal Horticultural Society (RHS) states: “Attempting to dig out the plants often assists their spread as, unless great care is taken, this operation will distribute the tubercles.

“Dig out tubers and young plants before flowering but may need to be repeated over several seasons.”

Common chickweed – a weed that produces small, white petalled flowers – is a rarer find, according to Lawnsmith, but can be obvious “in new lawns or in established lawns early in the year before mowing starts”.

Regular mowing usually controls common chickweed, but the experts say it is rather easy to pull out by hand if necessary.

The RHS adds: “Although time-consuming, hand-weeding or carefully hoeing beds and borders can be an effective way to control this weed as long as it is carried out before flowering and seed set, when weeds can also be added to home compost bins.

“Choose a dry day so disturbed weeds shrivel and die rather than re-rooting.”

Although daisies are nice to look at, these dainty white flowers are actually a lawn weed – and one of the most “significant” in the UK.

They flower between early spring and late autumn and can be a headache for gardeners who want to get rid of them.

Lawnsmith advises treating them from late- to mid-April until the end of the season.

The RHS advises digging out daisies with a hand fork before considering chemical pesticides.

The RHS states: “The RHS believes that avoiding pests, diseases and weeds by good practice in cultivation methods, cultivar selection, garden hygiene and encouraging or introducing natural enemies, should be the first line of control.

“If chemical controls are used, they should be used only in a minimal and highly targeted manner.”

Much like daisies, dandelions are common lawn weeds in the UK.

They are most noticeable by their large, yellow flowers which bloom between March and November.

As they are a rosette-type weed, the RHS recommends removing the plant and its roots with a hand fork. However, this can be difficult due to its long tap root.

Get the latest three-day weather forecast where you live. Find out by adding your postcode or visit InYourArea

Woodrush can be present in lawns all year round if the conditions are right, however, most often it flowers between March and April.

“Forms large patches in the lawn by sending out stolons to form new plants.”

According to Lawnsmith the plant is resistant to most weed killers, so digging them out is “the best approach”.

The RHS adds that the “main way” to keep field woodrush in check is by “reducing soil acidity”.

The gardening charity explains: “The best way to eradicate field woodrush and prevent it from coming back is to apply lime.

“Apply ground chalk or ground limestone in late autumn or early winter, after mowing has ended, at 60g per sq m. Do not use hydrated lime.”