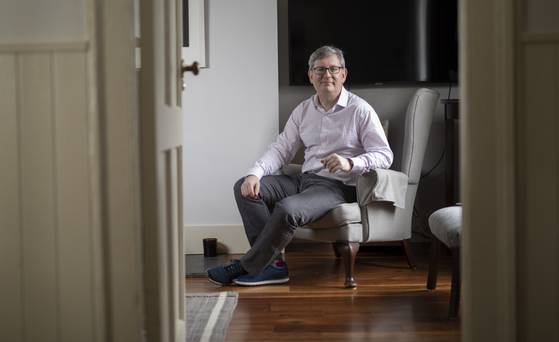 The vendor of 21 Upper Erne Street in Dublin’s city centre has an unusual benchmark for gauging just how far the street has come up in the world. When Anthony Abbott-King moved in nearly 30 years ago, there were security bars on the windows, perspex in the front windows, and a steel back door.

By the time he came to renovate seven years ago, though, Anthony had no hesitation in removing the bars and door, and putting glass back in the window panes. “And I haven’t had any problems,” he says.

The area, which is sandwiched between Holles Street hospital and Pearse Street, is now full of owner occupiers, says Anthony. He has been living there, on and off, since 1991 when he bought it with the help of a family friend. Originally from Athlone, he was studying history at Trinity College Dublin at the time.

Whatever shape Erne Street was in when it was a student pad, it is now in immaculate order. While the major work was done in 2012, Anthony completely refurbished No 21 six months ago, decking it out with beautiful linen curtains, thick carpets – which will be included in the sale – and furnishing it with fine antiques that he picked up from auction rooms and sales. It is now ready for a new owner.

The terrace was built in the period 1843-47 – there’s a map hanging above the kitchen table that shows Dublin in that period, and No 21 is already in place.

The house is only one room deep and double-fronted. This impressive frontage, says Anthony, a town and city planner, shows that land values in the 1840s were low north of the posher Merrion Square, the general rule being that the higher the land value, the denser the number of houses, and the more modest the width of the frontage. The houses in nearby Albert Place East off Grand Canal Street, for example, are single-fronted, although they are two rooms deep, or ‘double pile’. They were built with a passage hallway that allowed a second room to be built behind the front, rather than a central staircase like No 21.

After the Act of Union in 1800, the aristocratic owners of the large Merrion and Fitzwilliam Square houses followed parliament to London, having left, no doubt, many a bargain Georgian townhouse to be snapped up. The spectacular property crash that followed, depressed land values and, Anthony speculates, it may have allowed the builder of No 21 enough elbow room to put up a terrace with more generous frontages.

But it’s more likely, he believes, that the arrival of the new railway line from Dublin to Kingstown in 1834 hit land values anywhere nearby. The elevated railway line still cuts across the street en route to Pearse Street Station.

The first resident at No 21 was a coal merchant, a man who had ‘made good’, rather than one of the established middle class of lawyers or doctors. Perhaps, the Georgian styling and sash windows and shutters were an attempt to catch the eye of a buyer in an area at a time when property was hard to shift. These days, however, Erne Street has plenty to offer. It runs to 120sqm set out over three storeys with a good-sized back garden bounded by wooden fencing. To one side of the hallway lies the pretty drawing room with a wood-fired stove set into a tiled fireplace. The kitchen leads off to the other side and has open shelves and built-in units with a wooden countertop, and a Smeg range cooker and spider hob.

Stairs lead down to a tiled wet room and two rooms that are currently used as bedrooms, though one could be repurposed as a study or home office. One looks out over over the paved section of the west-facing back garden.

Upstairs, there is a generous return with window, a second good-sized tiled bathroom, and a further drawing room that Anthony likes to call ‘the morning room’ – though as it has windows at each end, it also catches the evening light. The third double aspect bedroom is also on this floor.

One key element of its appeal is that No 21 has development potential with room to extend to the rear, subject to planning permission. It is also ideal for the Living City Initiative, says Anthony, which offers tax relief on 10pc of money spent on upgrading each year over 10 years.

Erne Street is just a few minutes’ walk to Grafton Street, to the Dart station at Pearse Street, and to Grand Canal Dock and the restaurants on offer there. Facebook, Google and Airbnb are all nearby, giving the property obvious rental potential.

According to Anthony, No 21 would suit an older couple who want a city base or wish to downsize but be close to the city’s cultural activities – grandchildren would certainly enjoy an outing to the Bord Gais Energy Theatre. But it could also suit a professional couple keen for a base near Googleland.

Viewing: By appointment only