Michael Strahan lives in a stunning New York home and its most impressive feature has to be the jaw-dropping garage for his luxury fleet of cars!

MORE: Michael Strahan asks for help with underwear dilemma – but fans are divided

The GMA host left is fans shook when he shared a snapshot on Instagram Stories of his garage filled with a rainbow collection of luxury vehicles.

In the image, there were cars of every color stacked on lifts and he wrote: “All the colors in the garage has it looking like a bag of skittles,” he then asked: “Which color you choosing?”

There was everything from Porsches to Mercedes, old and new and the setting looked more like a car showroom than a garage.

Fans were likely wondering where he fits such an expansive car collection in his Manhattan home, but the answer is simple.

Michael has a warehouse where he keeps his beloved vehicles and he chatted about it to Motor Trend. 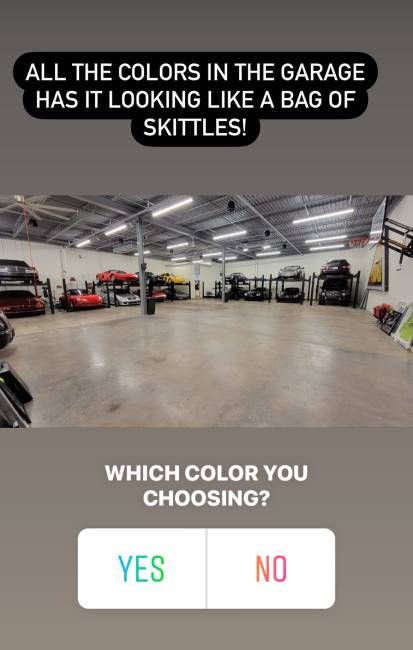 “I have a warehouse where I keep them,” he said. “I make sure I really want it. I’ll research a car, I’ll make sure it’s the right one, and if it’s something that really fits, that I would use. And once I buy it, it’s in my possession forever in my mind, so I’m not getting rid of cars anymore. I’ve learned my lesson.”

Michael was referring to the choice he made to sell his 1994 Toyota Supra. It was the second car he bought when he was first with the New York Giants.

He sold it because he didn’t drive the car anymore, but he soon regretted it as he realized the emotional connection he had with it. Michael shares his home with his two youngest children

Michael said: “I went through a point where I had cars and I said, ‘You know what? I got these cars and I don’t drive them as much as I used to, so I’m just going to get rid of them,’

“And then the second I got rid of the car, I wanted to kick myself because I wish I had the car. And I’ll never sell again.”

Included in the former NFL star’s collection is a gorgeous Porsche Carrera GT, a sleek Rolls-Royce Phantom Drophead Coupe, and a couple of his favorite Mercedes-Benzs.

Michael is estimated to be worth a cool $65million which would explain his expensive taste in cars, and he’s not done yet. “It’s growing,” he admitted. “It’s my thing.”