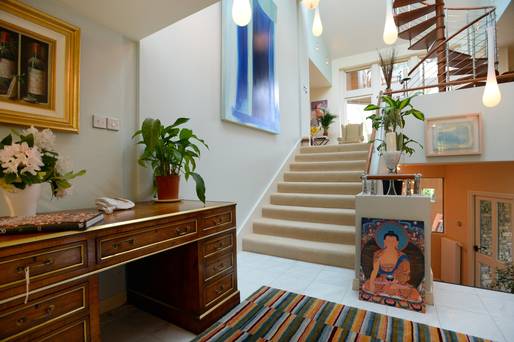 What type of holiday home owner would have a custombuilt church organ installed at the centre of his holiday home?

The late Vincent Price perhaps? The American actor was widely known for his famous opening scene in the The Abominable Dr Phibes, in which his hooded form is shown blasting out War March of the Priests’ – in the 1971 movie, he played a famous concert organist out to exact deadly revenge for the death of his wife.

For any lovers of the cult classic who have always dreamed of recreating the famous Vincent Price scene, there is a house by a lake in Co Kerry that could allow for some fun times as you tackle the keyboard at the enormous instrument, which is the focal point of Lakeside House at Caragh Lake.

This was built in the early 1990s for Gunther Kling, a German businessman who had a pharmaceutical factory in Killorglin at the time. Kling, an accomplished organist, asked pipe-maker Kenneth Jones, who is also responsible for the organ in the National Concert Hall, to custom-build an organ for his new home. The beautiful creation now sits in a glass music room that overlooks the living area, on view for all to admire and enjoy. The house, which was originally designed by Killarney-based architect Harry Wallace, stretches up over three floors. It has changed hands a couple of times since its inception, with each owner tweaking, adding and updating. It has a floor area of 3,000sq ft and sits on the most scenic site of 1.5 acres. With a private path down to the lake shoreline and dock, it’s the kind of house that keeps giving, both inside and out.

It is entered at the ground floor, with another level below and more above. On the ground floor is the large entrance hall with spiral staircase and glass-panelled doors. There is a guest bathroom to the left and two bedrooms (one of which is en suite) to the right.

Up on the first floor there is a cosy living area with wood-burning stove and balcony to take in the views of the lake. The music room is also on this level, as is the master bedroom. This comes with full-length windows that look out into the woodland, a dressing room and en suite bathroom with his and hers sinks.

Above this is a sun room with dome roof, which is just perfect for an Irish home because it feels like you’re outside, while fully covered. There is enough space at this top level for another bedroom or a home office.

Down on the lower ground floor is a circular dining room with cherrywood floors and a Morso stove. A curved breakfast bar separates this room from the kitchen, with its cream fitted units and integrated Neff appliances.

And just when you thought there couldn’t be any more surprises, behind the utility room is a wine cellar for those lucky enough to have some fine bottles to fill it with. A covered walkway links the main house to a substantial garage. This could easily convert, subject to planning, into extra living space for guests, or maybe a workshop or studio.

Outside is mature woodland that leads down to Caragh Lake. The house has been designed around the views with all living areas facing west to the water. The current owner cut down some of the trees to bring in more light and make the most of the vista below. The walk down to the lake is bordered by trees and plants, before it opens up to reveal a small beach area and private dock.

The house is in excellent condition with no expense spared on fixtures and fittings down through the years. It feels like it’s in another world but is actually only about 5km from Killorglin one way and Glenbeigh the other. It is a one off in its design with the unexpected around each corner. It would be a super house for entertaining, with the option of extra space for visitors in the garage, if converted.

The area is traditionally hugely popular with German buyers. The nearest neighbour for example is Ard na Sidhe Country House, a luxury hotel owned by the Liebherr Group, which also has its own boat stop further along on the lake.

The adjoining 18-bedroom, four-star country house was bought by the late Dr Liebherr in 1958 and welcomed its first guests two years later.

It’s a handy place to have on your doorstep if you’re a fan of afternoon tea that is served in the hotel on the terrace or by the fire, depending on the weather. As one of Ireland’s few Arts and Crafts era country homes to be designed in the Elizabethan revivalist style, Ard na Sidhe probably ranks second in Ireland only to Lutyens’ Lambay Castle. With hand-crafted oak panelling, Morris wallpapers and curtains, the hotel, a former country house, can be visited for drinks or food on the back terrace.

Ard na Sidhe’s story is of two unique women. Lady Edith Gordon, who fought to have it built exactly how she wanted in 1913 despite resistance from her builders (her journal can be perused in the library), and its current owner is Isolde Liebherr of the German Liebherr Crane empire (with a base at Killarney), who supervised its impeccable and ultra-precise restoration over many years with exact paints, wallpapers and joinery repairs carried out.

About 20 minutes away is Liebherr’s sister hotel, The Europe. The five-star luxury resort has won numerous awards, including best spa, so is an ideal spot for a day of pampering.

Kerry’s long-standing German connections brought 400,000 tourists to the region in 2017, attracted especially to the Ring of Kerry, and this house also offers obvious attractions for use as a high-end guest facility to commercialise on that interest.

Four miles long, Caragh Lake developed in a deep valley through which the Caragh River was at one time dammed. It is surrounded by the MacGillycuddy Reeks.

The highest mountain in Ireland, Carrauntoohil, looms tall on the western side of the lake.

Lakeside House’s direct access to the water means boat ownership, whether a small rower with an electric motor, or something larger, is a must to enjoy the location properly.

Caragh is a freshwater lake and is very popular with anglers and kayakers. It is noted for its salmon and trout. There is a lot of activity around the water in the summer months, when the sports centres open their doors to cater for the influx of local and holidaying children.

Cappanelea is an outdoor education and training centre close to the house, which offers an endless amount of activities, from windsurfing, kayaking, orienteering and rock climbing, to name but a few.

With your own private dock though, you can avoid the crowds and booking systems, and sail away whenever the mood takes you. The forests around it include stands of oak and birch and offer plenty of walks with mountain access for the adventurous.