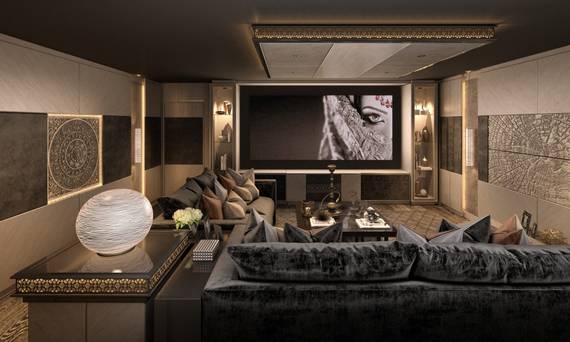 There’s a lot of myth around home cinemas. Myth 1: you need a lot of space to have one. Myth 2: only rich people can afford them. Not true. With a bit of imagination and careful economy, you can install a home cinema for around what you might spend on a kitchen.

With home cinemas, as with kitchens, there’s a sliding scale. There are kitchens out there that cost upwards of €100,000. Most of us can’t afford that kind of kitchen, but that doesn’t mean we can’t afford a kitchen at all.

First off, and if you’d like to dream a bit, it’s worth looking at what’s happening at the high end. A dedicated home cinema, or what the Americans call a ‘theatre room’, is a room designed specifically for watching movies on the big screen.

It looks like a smaller version of a boutique cinema with a fixed screen and luxury seating. For sheer drool factor, it’s worth checking out Elite Home Theatre Seating (Elite HTS), which has an online facility that actually allows you to “design your own chair”. A dedicated home cinema at this level can cost up to €200,000. Of that, 60pc will be potentially spent on technology and 40pc furniture, fixtures and fittings. Or vice versa, depending on your priorities.

“We install a lot of home cinemas for clients that don’t even use them,” says Cian O’Carroll of Reon Technologies. “They’re just ticking a box. You have the swimming pool and the sauna, and now you have the cinema. But it’s becoming a more inclusive area; we’ve even installed one in a shipping container!”

One of the issues is space. There’s no set size for a home cinema. Larger versions can be fitted with tiered seating, often for between nine and 12 people, but a room that is eight feet tall x 10 feet wide x 12 feet deep can accommodate a screen and seating for three or four people.

Bigger is probably better. Sitting too close to a screen can give you a crick in the neck. Additionally, the proportion of a room is important to the way that sound works within it and there seems to be a consensus that rectangular is better all round.

“Acoustic treatment is a mixture of sound proofing, so the noise doesn’t blast elsewhere in the house, and making sure that the room sounds good,” O’Carroll says. Whatever your budget, he recommends that you spend the same amount on audio as you do on the visual component of your home cinema. They’re both equally important. Dolby Atmos is the industry standard for surround-sound technology. He describes this as: “a number of speakers in the walls and the ceiling that re-create the sound as the director intended.”

The interior design element of dedicated home cinemas tends to draw on historic cinema design. If you’re looking for inspiration, check out the lighting and furnishing choices at the renovated Stella cinema in Rathmines (red plush velvet and art deco-style glitz) or its new-build sister cinema at the Devlin Hotel in Ranelagh (pared-back mid-century Scandi). Most home cinemas seem to gravitate in one of these two directions. “Some of them even have popcorn machines,” O’Carroll comments.

Because dedicated home cinemas are expensive and take up a lot of space, multi-purpose media rooms are often a more practical option. A media room is a living space that transforms to become a cinema and typically costs an extra €20,000 to €25,000 to install as part of a renovation project. Most media rooms include a television, for causal watching, as well as a projector screen.

A media room can’t match the immersive experience of a dedicated home cinema, but they have one supreme advantage. You can use them for something else during the day.

“I installed one for my sister in her garden room,” O’Carroll says. “During the day, it’s her office. In the evening, the screen comes down and all the kids in the neighbourhood come round to play.” You can use a media room for playing video games, watching sport, or messing around on YouTube, none of which really require the full-on cinema experience. And you don’t need extra seating because you already have the couch.

So you sit down on that couch and start pressing buttons. What happens? First, a projector screen comes down. Then a projector descends from the ceiling, the black-out blinds or curtains slide silently closed, and the lighting dims. Ideally, all your media is operated from a single device – nobody really wants a media room that requires six different remotes – and all the technology is concealed when not in use. The speakers are built in to the ceiling and the walls. They’re not invisible, but you have to look for them.

If you’re installing a media room, you’ll probably be working with an audio visual integrator. Some of the brands are more compatible than others and hiring someone with the expertise to oversee the project will save you money in the long run. Irish companies that offer this service include Reon Technologies and Cloney Audio, but it’s also worth checking out one of the main UK suppliers, Pulse Cinemas.

Still don’t have that kind of money? Here’s the DIY option. Quality projectors from Harvey Norman cost between €300 and €1,000 and can be hooked up, via Bluetooth, to an existing sound system. A 750ml tin of Smart Projector paint costs €89 from Smarter Surfaces, and will be easier on the eyes than projecting onto a white wall.

After that, you just need to close the curtains and adjust the furniture. What you do need, though, is decent broadband. Waiting for a movie to finish buffering is worse than stale popcorn.