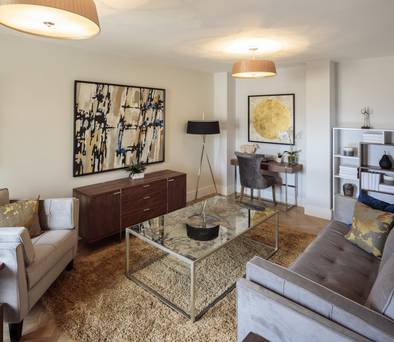 Lambay Island, located 4km off the coast of north Co Dublin and owned for more than a century by the Baring family of Barings Bank fame, is home to a population of wallabies, introduced to the private island in the 1950s by Rupert Baring, who hand-reared the very first joeys.

The island – the largest off the east coast – can be viewed from the three-storey four-bed homes at Hollybrook Homes’s Robswall, which is perched on the curve of the Coast Road from Malahide to Portmarnock. Some of the dual-aspect houses, which are located on a hill just a five-minute walk from the seafront, also command views of Ireland’s Eye to the south.

A scheme of apartments and houses was built there during the Celtic Tiger by Gerry Gannon’s Gannon Homes, but building ceased during the property crash. Nine acres with planning for more homes and a portfolio of 85 properties were sold to London-based Development Securities in 2014. It, in turn, sold on the development site to Hollybrook, which, in its first foray to the Irish market, launched newly-built houses at Robswall in early 2015.

In March, Hollybrook released a tranche of apartments at Robswall to target buyers downsizing from larger properties in the area or purchasers who simply preferred the convenience of apartment living. The start of the final phase at Robswall kicked off in May, when nine four-bed terraced houses went on the market. Nine more of that type are slated to go on sale next spring. In the meantime, there are four tall homes from the final phase of houses at Robswall still available, with prices starting at €810,000. Each one has 2,357 sq ft of accommodation in a mid-terraced or end-of-terrace design.

The entrance hall to each property is off the ground-floor carport, which has grey-coloured automated doors and space for two cars. This entrance hall leads to a family room with a set of glazed doors opening on to a patio and garden. A guest lavatory, hot press and storage space complete the downstairs accommodation. On the first floor, there is a living/dining room with a set of French doors – flanked by side glazing either side – that opens on to a railed Juliet balcony. On the other side of the floor is a kitchen with an angular island unit and a dining space. The second floor is home to four double bedrooms, two of which are ensuite, and a family bathroom. All the bedrooms come with fitted wardrobes.

Each individually-designed kitchen has soft-close doors and drawers, under-cabinet lighting, a stone worktop and upstand, branded integrated appliances, and a ceramic hob with an extractor hood. The utility room was designed to match the kitchen units and worktops.

The A-rated homes are equipped with a gas-fired central heating system and roof-mounted PV panels to top up electricity supplies.

Robswall is a five-minute drive from the Malahide Dart station, and Dublin Bus stops right outside the entrance to the scheme.

The showhouse will be open tomorrow, from 10.30am to 11.30am, and can also be viewed by appointment.