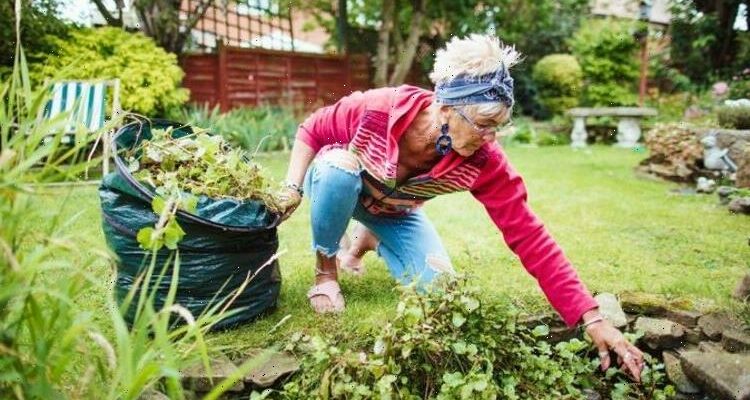 Homebase advises on garden jobs to do in March

With British homes used to pristine lawns, trimmed bushes, succulent roses and wooden decking galore, a new fashion suggests the days of glossy style magazine-style gardens is over. Many avid green-fingered Brits are now leaving their gardens, or at least parts of them to a trend called “rewilding”.

A recent survey by BBC’s Gardeners World magazine found 54 percent of respondents had created a “wildlife zone” or “uncultivated area” in their gardens last year.

The number shows the trend is up 11 percent from the year before.

Another 44 percent of participants stated they had created a wildflower section in their front and back yards.

The attempt to re-wild may be an effort to encourage wildlife back into British gardens, towns and cities.

A saddening part of the survey showed butterfly sightings in the UK decreased again in 2021, with reports of peacock butterflies down six percent, and painted ladies down 10 per cent in a single year.

Sightings of the latter have almost halved in the past two years, with 16 percent of respondents reporting having seen one in their garden, down 10 percent from 2020, and down from 31 percent in 2019.

Participants in the Big Butterfly Count, carried out last summer by Butterfly Conservation, counted nine butterflies or moths, down from 11 in 2020, and from 16 in 2019 – the least ever reported.

Kate Bradbury, the wildlife editor at Gardeners’ World, said gardeners keen to boost butterfly numbers should resist the urge to clear up dead leaves or cut back dead stems from which chrysalides may be hanging.

Many local councils have also adapted the trend into public spaces.

Parks, central reservations, roundabouts and green spaces have been witnessed around the country to have dedicated areas for wild growth.

The move is again an attempt to encourage insects, birds and small mammals into the areas, as well as providing a safer haven for them to thrive.

According to Rewilding Britain, an organisation dedicated to creating and advising on such spaces, gardening is about human intervention.

The group provides a 15-point plan as to how best to create your own wild space.

Items include creating a natural haven by avoiding the use of chemicals and pesticides, embracing the mess by understanding a pile of dead leaves could be home to a hedgehog, allowing decay, which turns old vegetation into fertiliser and also planting a mix of shrubs and trees to encourage birds.

The organisation also suggests gardeners should monitor the progress of their efforts to rewild their land.

The group states: “You can monitor many different species groups to show changes in biodiversity on your rewilding site.

“The species you choose will depend on what questions you want the data to answer, and what habitat and opportunities for wildlife are present on your site.

“Local wildlife groups, such as the relevant county Wildlife Trust and Local Nature Partnerships should be the first point of call for advice on existing schemes for monitoring.”

HAVE YOU DEDICATED A PART OF YOUR GARDEN TO THE WILD SIDE? HAVE YOU SEEN ANY LOCAL PARKS OR OPEN SPACES ADOPTING THIS METHOD? HAVE YOU NOTICED ANY CHANGES IN WILDLIFE VISITING YOUR AREA? HAVE YOU SAY ON THIS TOPIC BY VISITING OUR COMMENTS SECTION – JUST CLICK HERE – EVERY VOICE MATTERS!

Chelsea Green suggest any size garden will do.

They said: “Rewilding is possible even in the smallest of spaces.

“It doesn’t mean letting nature take over the whole of your garden.

“If you do, you usually end up with more of the invasive weeds and, while it’s fine to have a bramble patch on a farm, you don’t want those species taking over a small garden.

“But you can loosen up and create areas where wildlife can thrive, such as a tiny copse in the corner, an area of long grass, a few weedy patches, some woodpiles and small ponds.

“These will create a mosaic of interconnecting habitats that will attract a wide diversity of species.”