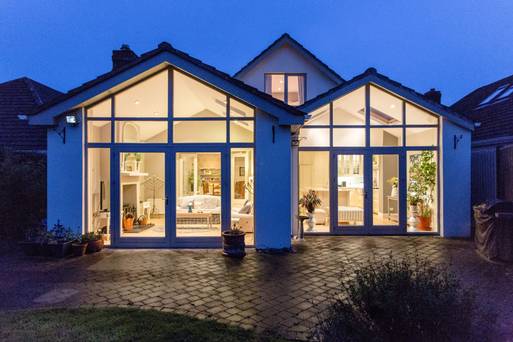 Since the crash, the lucky few with lots of cash in the bank made hay on the back of the small builder’s misfortunes.

Scooping up non-protected period properties in need of work and, with the benefit of the cheapest building labour in a generation, they have gutted them and extended in all directions; providing homes which are essentially brand new, but with olde-worlde forms and features included.

But now the hay-making has ended. Through the last year builder availability has been in steady decline while costs have surged. Now many big scheme, busy operators won’t get out of bed for less than €250,000 when it comes to a one-off project.

What it means is that if you want a period era abode these days and you don’t want to bankrupt yourself doing it up, you’ll need to take a closer look at those older homes in which the heavy lifting work has already been done. Better again if you can find one that specifically had that work done in the boom years. While big builders slapped up developments to an often questionable standard (as we are learning this week) it was usually a different story when it came to one-off smaller projects. For the most part, homes redeveloped in those big spending days were generally carried out with the very best of new bathrooms, kitchens and fittings on board that boom-era money could buy.

Such was the case 15 years ago when the previous owners of No 9 Myrtle Grove dug deep into their pre-recession pockets to extend the detached property both up and out, effectively doubling its size in the process. When the current owners bought the house seven years ago, there was nothing left to do but turn the key and move in. Now the 1950s house at Myrtle Grove is back on the market seeking €825,000 through DNG’s Stillorgan branch.

At first glance from the gravelled front driveway, this may look like a compact house, but make no mistake, once you step through the front porch, you’re in a tardis. At 2,153 square feet, it’s twice the size of an average three-bed semi, and while the price tag makes it unlikely to draw too many first-time buyers, for trader-uppers and downsizers alike, it ticks lots of boxes in terms of both living space and location.

As a family home, it’s within walking distance of schools including St Brigid’s, St Laurence’s, St Raphaela’s, Oatlands and Benildus College. You can cycle to UCD, take a bus into town, or drive down the road and you’re on the Stillorgan dual carriageway.

As most of the living space is at ground level, the house will also appeal to local downsizers who want to stay in the area but are looking for a future-proof house that doesn’t involve climbing stairs, preferably one that could accommodate a live-in carer should the need arise.

On either side of the hallway to the front are original mirror-image rooms with solid fuel-burning stoves, used by the current owners as double bedrooms. Next, to the right, is a family bathroom with Travertine-tiled floor and walls, a walk-in power shower, standalone cast iron bath, wc, whb and heated towel rail. Across the hall is a small home office/study which was formerly used as a child’s bedroom. Stairs to the left lead up to a dormer attic conversion which has a shower room and two double bedrooms, one with a walk-in wardrobe.

But it’s at the far end of the hallway that the house truly shines, with a bright, open-plan double-height extension that looks like something out of RTÉ’s Home of the Year. High-vaulted ceilings with oversized Velux windows and floor-to-ceiling glass doors maximise every ray of the afternoon and evening sun that falls to the rear of this house.

And the way it’s been done should perhaps set an example for how best to extend such classic 1950s bungalows while not creating an entirely unrelatable property at the rear. In this case the previous owners split their extension with one side slightly overlapping the other to lend a stepped effect. With the new dormer window poking out above to top off the new space, it’s almost a complete echo of the 1950s frontage.

With many bungalow extensions the flat glass box more typically deployed runs the whole width of the rear of the house and while it will look glassy and classy, the symmetry of the house is completely lost.

To the left of the L-shaped living space is a bespoke New England-style kitchen with units handmade from reclaimed wood by the Victorian Salvage & Joinery Company, a gas-fired Aga, Silestone quartz worktops and an island unit with Belfast sink. Beyond that is a seating area/den with vaulted ceiling and glass doors opening out on to the patio and garden.

To the right of the kitchen is a spacious dining area and separate living room with folding glass doors on two sides to the kitchen/diner, and to the rear, floor-to-ceiling glass doors leading out to the patio. It’s easy to imagine a buzzing summer barbecue here with all these doors opening up the house and garden to create one gigantic entertainment space. The patio runs the width of the house, beyond which is a lawned garden with a trampoline and swing seat at the end, fencing to one side and hedging to the other.

The great thing about 1950s bungalows is that most were endowed with a garden of 100ft or more – the idea was that in times when rationing was a recent memory and still affecting some items, the owners could dig in and grow their own produce right in their back yard.

Aside from the attic extension’s dormer window above and a new timber supported porch, the character of the frontage has been largely retained, including the original garage space which has double doors in a nod to the originals.

Back inside, there’s a utility room/mini kitchen off the dining area with a washer, dryer, oven/hob, fridge, ironing facilities and a Climote smart heating unit that allows you control the heating in each room from your mobile phone. This room leads on to the 14x8ft garage which could accommodate a good sized 1950s vintage motor, but is also ripe for conversion to a workshop, studio, den or games room if owners wanted extra living space.

These bungalows, having been constructed in 1952 and 1953, predated the development of Stillorgan as a full blown suburb. Back then it was still very rural.

It was 1966 when Stillorgan really got on the map and got going. It was also a momentous year for Ireland. Crowds lined O’Connell Street for parades commemorating the 50th anniversary of the Easter Rising. ‘Nightiegate’ rocked the nation as the Bishop of Clonfert lambasted Gay Byrne and The Late, Late Show when one guest revealed she hadn’t worn a nightie on her wedding night. And Dickie Rock opened the country’s first ever modern shopping centre in Stillorgan.

This radical retail concept gave Dublin’s Southsiders their first taste of a new trend described in a Woman’s Way magazine feature as “shopping of the future”.

“You park your car in comfort, then park your children in the free nursery provided, and stroll leisurely about your business on traffic-free malls,” it reported.

The centre had three anchor supermarkets – Power’s, Liptons and Quinnsworth – and its forty other shops included Cassidys, Fenelons, Imco and Prescotts. Sixties magazine readers were assured they would “go right off the rails with Bolger’s spring suits”.

A line of 19th-century cottages had been demolished to make way for the modern American-style mall located opposite two other local landmarks, Ireland’s first bowling alley, Stillorgan Bowl on one side, and on the other, the country’s first Ormonde Cinema.

It meant that existing residents who had moved into the recently developed suburbs – like the first buyers of No 9 – suddenly found themselves living in what for a time became the hottest neighbourhood in town, one which up to then had been more of a sleepy village than a buzzing lifestyle hub.

Prior to this, the landscape was nearly all dairy farms and tilled fields until development began in earnest in the 1950s, when rows of houses on connecting streets were built on the Merville estate, then owned by the Jolly dairy farm family. One such street, with 20 bungalows built circa 1952-53, became known as Myrtle Grove.

While features such as guest wcs, ensuites and attic rooms were not yet in vogue, one thing these bungalows had going for them that few new builds have today were those huge rationing era front gardens.

So large indeed that when homes like No 9 were hugely extended in the last 20 years, there was still plenty left over to enjoy family summer evenings outside.