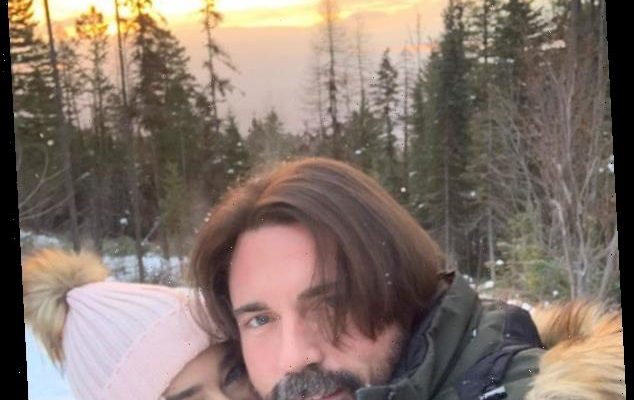 The Real Housewives of Beverly Hills star revealed via Instagram that she and husband Aaron Phypers have plans to move part time to Montana.

“Soon we will be living here in Montana & Los Angeles.. best of both 🌎,” Richards captioned her post, which features a photo of the couple smiling. “the first time I went to la when I was younger I felt like I was home, same feeling visiting Montana for the first time 7yrs ago. Such a sense of peace & simplicity.”

The Ford v Ferrari actor moved his family to Indonesia, where they enrolled his son, Noah Rev, 7, in a special school where the mission it is to “create the next generation of environmental leaders,” Lucas said on Jimmy Kimmel Live!

Lucas explained, “It’s deeply in the jungle. It’s like Swiss Family Robinson — they grow their own food, they make their own buildings out of bamboo.”

His ex and mother to his son, Jessica Ciencin Henriquez, wrote on Instagram, “They say if heaven and hell had a baby, it would be Bali. I’ve never heard a more accurate sentence. One second I’m watching a picture perfect sunset, painted by the gods and the next I’m swatting away a dark cloud of mosquitoes and trying to keep frogs out of the house. One moment I’m madly in love with this nature soaked isolation and the next, I’m on sky scanner checking flights back to civilization.”

The Kardashian-Wests are going west, y’all! Kanye West bought a ranch for the family in Wyoming and it seems as if the family is considering a move. Kim Kardashian West isn’t sold on living on the ranch full-time, but admits that she loves the idea of it for summers and weekends.

The mogul told Jimmy Fallon, “My husband did just buy a ranch there. His dream and his vision is to move there. I love L.A. So, I envision summers, I envision some weekends. But yeah, we love it. It’s like the prettiest place you’ve ever seen in your entire life. Even my sisters, everyone, we’ve had this dream of getting a ranch and just spending our summers there and getting away.”

When he isn’t starring in Jurassic World or Guardians of the Galaxy, Pratt is raising sheep on a farm in Washington state. He even has prize-winning wool to back it up! He calls the ranch his “special slice of heaven.”

After living in her Connecticut farmhouse for nearly a decade, the Bridget Jones’s Diary actress put the historical home on the market in 2014.

The Bachelor in Paradise star currently lives out of his van. He told Entertainment Tonight of the decision, “I’m just, like, trying to travel the country and see what happens. I live in a van now. I’m planning on [traveling] all across the continental U.S. and then maybe up into Canada as well.”

He added, “I’ve just always kind of had like a nomadic spirit in me, and I’ve always wanted to do it, and I was, like, no better time than now.”

The singer sold his New York City and Los Angeles homes in 2012 and retreated to Montana, which he has called home since.

Ruffalo, his wife and three children live on a 50-acre plot of land in upstate New York, far from the hustle and bustle of Hollywood and Manhattan.

Ruffalo said of the real estate purchase, “The whole guiding idea for living upstate was to simplify. We asked ourselves, what do we need all this s— for? What is it adding to our lives?”

Daniels moved to Michigan with his family 32 years ago “to create as much a sense of normalcy as possible.” He said of the decision to relocate, “It was a very dramatic move in 1986 to move to Michigan, but that was to keep the family number one. And that worked.”

The Mr. Robot actor bought a home in Coconut Grove, Florida, in 2013.

Holy Toledo, Batman! Keaton owns a ranch in southern Montana, where he has spent much of his time in the past 28 years. Keaton once said in an interview, “Once you see the west, there is no going back,” and for him it may just be true.

The Lord of the Rings actor spends most of his time in Austin, Texas.

The comedian moved to Brevard, North Carolina, and started picking the banjo and writing bluegrass music. No, really. Martin lives in the small town, and frequently collaborates with the Steep Canyon Rangers.