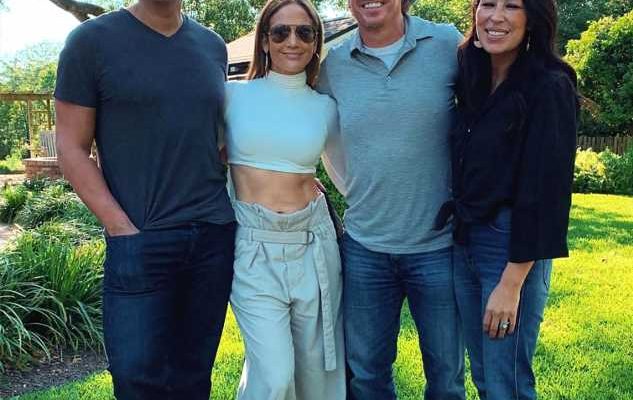 Alex Rodriguez and Jennifer Lopez spent some quality time this weekend with Chip and Joanna Gaines in Waco, Texas, just one month after Joanna visited the stars’ new California home.

In the photo, the group poses outside with Rodriguez in a dark gray V-neck T-shirt and Lopez showing off her toned abs in a white turtleneck crop top and flowy beige pants. The Gaines keep it more casual in jeans, with Joanna in a black blouse and Chip in a gray polo shirt.

Chip, 44, shared a similar photo and hilariously wrote, “What is going on!?? This is like a Twilight zone of hot people. Then there’s me, looking as usual.. disheveled. Thanks for coming to town @jlo and @arod!,” while Rodriguez commented, “Thanks for having us.”

The former Yankee slugger, 43, also shared a sweet video of him and fiancée Lopez cuddled up on a porch swing, writing, “Saturdays in Waco [Texas].”

Rodriguez’s location in a second photo was tagged at Magnolia Market, a shopping complex owned by the Gaines that features food trucks, a bakery and a garden.

Lopez, 49, is a self-proclaimed superfan of the couple’s show Fixer Upper, which aired its final episode on HGTV in April 2018.

Joanna, 41, first visited the singer’s new Malibu beach house in March, and a source confirmed to PEOPLE that she was considering helping her and Rodriguez remodel their oceanfront property.

“Jennifer wanted to walk the space with Joanna in person,” the source said. “They’re both extremely busy, but it’s hard to take on any kind of home project without actually seeing the space.”

Despite the presence of a camera crew filming the pair outside the property, however, the source said, “There is no formal plan for any of the footage and there have not been any final decisions made in terms of whether Joanna will be involved [in designing the house] or to what extent.”

Instead, the meeting, was “really just an opportunity for them to walk the space together and for Joanna to hear Jennifer’s vision for the space.”

The face-to-face meeting came one month after Lopez revealed that Rodriguez surprised her with a FaceTime call with Joanna as an anniversary present.

“We got a little fixer upper next to the water, and we were like, ‘Oh, we gotta fix this up, it’s really a house that needs work,’” Lopez explained on The Ellen DeGeneres Show. “I was like, wouldn’t it be amazing to have [Gaines] do it for us? But she doesn’t do anything outside of Waco, like nothing.”

The “Medicine” singer had all but accepted she wouldn’t be receiving design help from Gaines when Rodriguez requested her presence at a meeting about the house.

“He opens up FaceTime and it’s Joanna Gaines. And I was like, ‘Are you kidding?! Hi!’ I totally fangirled out,” she recalled. “And she was like, ‘Hi,’ just like she is on the show.”

Since ending Fixer Upper, Chip and Joanna have announced they’ll return to TV with a new cable network of their own with Discovery Inc.

“Our hope with this network is that it really feels like home,” Joanna said while speaking at the Discovery Upfronts. “I think when people come, they’ll find what they were looking for. Whether its design, gardening, cooking — that it resonates with people. We hope that people come, sit and they stay a while.”

Though the multi-platform media company doesn’t yet have a name, fans can expect long-form programming centered around community, home, garden, food, wellness, entrepreneurialism and design – as well as old episodes of Fixer Upper.