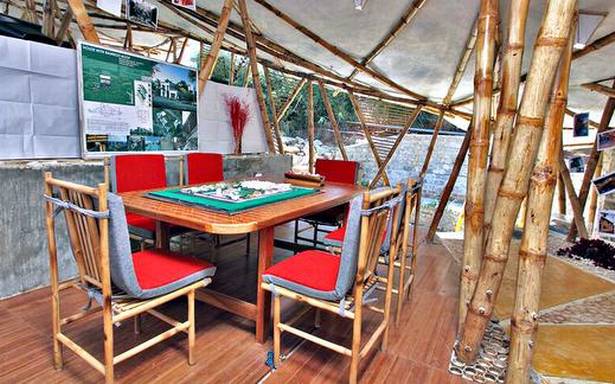 Due to its sustainability and high tensile strength, bamboo could be a boon for the construction industry. By M.A. Siraj

Climate change is the overriding concern for all those pursuing the goal of reducing carbon emission. Quest for material that could be resource-efficient is gathering pace by every passing day. The building sector is a major contributor to Co2 emission. A quest is therefore on for materials that could be renewable without compromising the safety and security of the built environment.

Globally, the building sector is stated to be responsible for 658 million tonnes of carbon emission which accounted for 45% of the total carbon emission due to fossil fuel combustion by the end-use sector, as reported by the Pew Centre for Climate Change in 2002. Two other sectors, namely transportation and industry, contributed 32 and 25 per cent of emissions respectively.

Bamboo, botanically categorised as woody grass, occupies the top position among sustainable materials. Though known as ‘poor man’s timber’ since long, it is now moving into the scheme of builders and architects wherever it could replace unsustainable materials. Latest researches have rechristened it as ‘vegetal steel’ due to its high tensile strength and lesser weight. The tensile strength of the fibres of a vascular bundle could be upto 12,000 kg per sq. cm., twofold of steel. It is proved to be stronger than wood or timber in compression. It weighs much less than steel, given the same volume of the two materials. This lends it cost advantage in transportation to building sites.

People in China, India and all South Asian and South-east Asian countries have been familiar with use of bamboo in construction of dwellings as well as a vast range of household implements and articles of daily use. Major chunk of knowledge of bamboo building technologies have been part of their cultural traditions. Over the centuries, it has been entwined with their lives, be it raising structures or fences, rafts for crossing rivers, and in roofing and partitioning of homes.

However its growth efficiency is its major strength. Some varieties of bamboo culms even register a growth of four feet during a 24-hour day. It can attain full height in four to five years. It is capable of achieving soil and moisture conservation, can restore fertility of degraded land and is termed as carbon sink and oxygen factory. It produces immense amounts of biomass which can be used as fuel.

It can be cut or spliced with ordinary tools like household scythes. This makes it amenable to easy splitting for laminated strips or woven mats. It is rated highly for its thermal conductivity and insulation property. The outer wall of the culms is covered by a cutinised layer which protects it from insects and from wearing out and imparts it excellent acoustical quality in a bamboo forest.

Cumulatively, these characteristics are lending a new push to bamboo which is regarded as a future sustainable material along with mud and stone.

Latest researches have established that bamboo comes pretty low in terms of energy balance of various building materials. Energy balance is the energy required to produce a unit of building material with a certain level of load-bearing capacity. It is measured in terms of megajoules per cubic metre (MJ/m3), which denotes the amount of energy equivalent to energy produced by a litre of diesel.

Architect Neelam Manjunath, who is the Managing Trustee of the Centre for Green Building Material and Technology (CGBMT), says bamboo-growing areas in the world converge with countries with huge deficit of affordable housing, hence there is large scope for deploying bamboo in construction of affordable houses.

Neelam has been instrumental in designing buildings with large-scale use of bamboo such as Farmers’ Centre in Tiruchi, Bamboo Symphony in Bengaluru, Bamboo Centre in Dayalbagh University in Agra and Amritsar Bamboo Centre.

Gurudayal Saran, Project Manager, Dvaja Builders, says 45 per cent of the world’s bamboo grows in India and it is quite natural to expect wider use of the material for affordable housing. He says bamboo trusses and rafters may last 10 to 15 years while untreated bamboo under cover may last four to seven years.