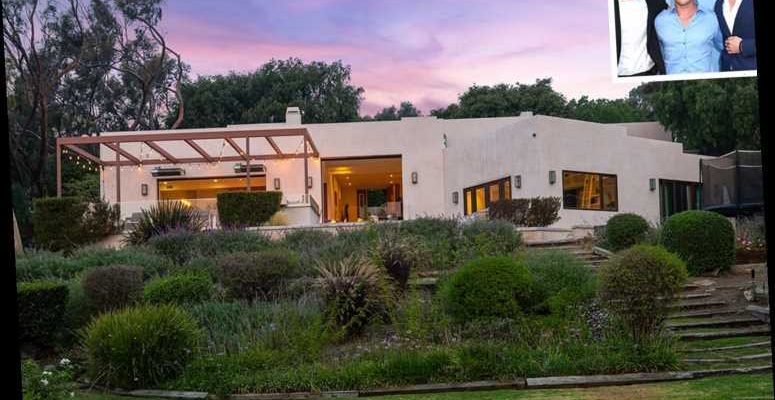 Australian heartthrobs Liam, Chris and Luke Hemsworth are saying goodbye to their shared home in Malibu.

According to the listing, the four-bedroom, four-bathroom home takes full advantage of indoor/outdoor living with an open floor plan that leads out to a large deck with an alfresco dining area. Floor-to-ceiling sliding glass doors connect the kitchen and dining room to the backyard, which offers uninterrupted views of the Pacific Ocean and Santa Monica Mountains in the distance. Inside, highlights include a chef’s kitchen, a home theater and a 750-bottle refrigerated wine cellar. High ceilings throughout the home add to the bright and airy vibe, along with light wood features and white marble accents. Whichever brother claimed the master suite has had the opportunity to enjoy dual walk-in closets and a steam shower.

In addition to the dining space out back, the property also features a greenhouse, ample gardens, an outdoor fireplace and nearby horse stables. Liam Hemsworth, 30, is currently spending time in the brothers’ home country of Australia, hanging out with his new flame, model Gabriella Brooks, 22. In early May, the Hunger Games actor told PEOPLE he was happy to be back near his family. "It's just a very mellow area where I grew up," he told PEOPLE at the time. "It's quiet and it's a beautiful spot. I'm able to see the ocean from my house."

Liam and ex-wife Miley Cyrus shared another home in Malibu, where they planned to host their wedding before the property was destroyed in the California wildfires in November 2018. Instead, they wed in Cyrus’ home in Franklin, Tennessee, in December before separating in August 2019.

A source confirmed to PEOPLE in November that Liam sold the property to an unidentified buyer for $3.6 million in an off-market deal in October. Liam has been also spotted surfing with Chris, 37, in Australia in recent months. The Thor star recently celebrated his 10th wedding anniversary to Spanish model Elsa Pataky, 44, with whom he shares 8-year-old daughter India, and 6-year-old twin sons Sasha and Tristan. The family has lived in Byron Bay, Australia since 2014.

Luke, the oldest brother at 40, has also relocated back to Australia after living in Los Angeles for many years while working in the film industry. He has starred in HBO's Westworld since 2016. Luke is father to four children with his wife Samantha — Alexandre, Holly, Ella and Harper.