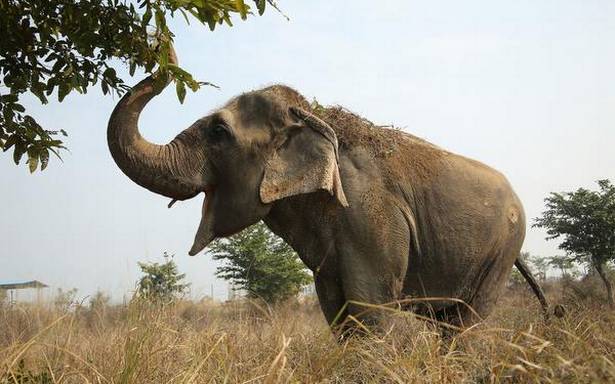 This World Wildlife Day, we focus on organisations helping India’s untamed and domesticated animals. And say hello to Lavender, the donkey rescued from a brick kiln in Maharashtra

Did you know India has a hospital dedicated to elephants? Or that there is a specialised centre where abandoned race horses and branded donkeys are cared for?

For those of you who’ve wondered what happens to the kite whose wings have been cut by a maanja or a snake whose spine is broken, or perhaps who rehabilitates injured baby rhinos before releasing them into the wild, this story is for you.

Founded by: Wildlife SOS in collaboration with the Uttar Pradesh Forest Department

In mid-November 2018, a hospital threw open its doors to beneficiaries that usually come with four legs and a trunk. In its four months of existence, the offshoot of the Elephant Conservation and Care Centre (ECCC) in Mathura (set up by Wildlife SOS in 2010), has been a sanctuary and healing space for pachyderms of every strata — from blind begging elephants and those with unhealed wounds to animals in pain due to geriatric-related issues. Today, over 20 elephants reside here.

Recently, it also started taking in outpatients, Holly and Luna, two visually impaired elephants suffering from chronic ailments, were among the first.

From a time when a blind Holly would gently touch the ground with her trunk to know where she was, to now, when she’s under treatment for her injuries, the quality of her life has changed significantly. “We’re starting her on a new diet to address malnutrition and while we can’t give her back her vision, we will ease her scars with laser therapy and antibiotics. It could be a long journey, but we are thrilled to be with her,” says Arinita Sandilya, a senior executive with Wildlife SOS.

The 12,000 sq ft hospital has portable Xrays, ultrasound machine, foot care tools and an observation room. An interpretation centre and observation window for visiting veterinarians, biologists and elephant caretakers from around the world (to learn about veterinary care for captive Asian elephants) has also been established.

The hospital hopes to soon become a centre for specialised veterinary treatment to injured, unwell or geriatric elephants. It also aspires to make contributions to behavioural studies, veterinary sciences and pathology of Asian elephants and contribute towards framing better conservation policies. To visit, volunteer or donate, log on to wildlifesos.org.

Founded by: Wildlife Trust of India, in partnership with Assam Forest Department and International Fund For Animal Welfare

Earlier this month, forest department employees spotted a leopard caught in a snare near Jorhat, Assam. A call was made to the CWRC team, which rushed to the location, tranquilized the male leopard and brought it to its treatment facility near Kaziranga. It has since been operated upon and is expected to be released into the wild soon.

Since 2002, the CWRC, located near the Kaziranga National Park, has focussed on rescue, treatment and rehabilitation of wild animals in distress in the region and other States, when needed. Starting with protecting animals during the floods in Kaziranga, the organisation works round the year now, sometimes hand-raising young animals before resettling them in a natural environment, as close as possible to the site of rescue.

Dr Rathin Barman, Head, CWRC, says the group has (till August 2018) handled 5,434 animals, of which a whopping 62% (3,187) have been released into the wild. The rest either were transferred to lifetime care facilities, conservation breeding facilities or died during treatment.

He particularly mentions the rescue, treatment and rehabilitation of clouded leopards, 18 baby rhinos, hundreds of deers (hog, swamp and barking deer) in Kaziranga, and many elephants in Assam.

But why is a facility like theirs important? “Such hospitals are vital to handle the crisis on wildlife due to various anthropogenic activities, specially the conflict between humans and wildlife.

Very often, animals get injured on roads passing through wildlife corridors or are stranded in human habitation. Hospitals such as ours support them in their healing and rehabilitate them in the wild again.”

CWRC is recognised by the Central Zoo Authority and has essential veterinary infrastructure, including a surgery theatre and an evolving preliminary disease investigation laboratory. It has holding shelters for birds, reptiles, ungulates and primates. Big cats have enclosures and outdoor paddocks take care of elephants and rhinos.

To make a donation, visit wti.org.in.

Lavender, Abraham and Jock stand quietly in a corner of the enclosure as Kaali, Bellachi and Ottagam prance about in another. The donkey enclosure at IPAN’s farm in Mavanalla, Masinagudi, has over 150 abandoned animals drawn from across the country. Some fell exhausted by the roadside and some were rescued from brick kilns in Maharashtra.

Earlier, donkeys were commonplace as beasts of burden and then, someone decided that a person’s illness would magically disappear if he/she branded a donkey. Today, IPAN treats these abandoned animals, most of which live out their life on the scenic farm.

Nigel Otter, trustee, says the equine team roams about to treat donkeys. Occasionally, the odd primate (monkeys, abandoned racehorses and ponies) comes in injured, after contact with an electric wire. Livestock attacked by wild animals are operated upon at the 250 sq ft. theatre. Ilona Otter, Nigel’s wife, one of the vets on call, travels along with Dr Tvesa Ranganath to the equine camps. Earlier, the donkeys proliferated in a safe environment, but to control numbers, IPAN has neutered them.

Founded by: People for Animals

Even if you’re staying in a crowded city, look around, and you’re sure to find some urban wildlife. Kites, snakes, squirrels, owls bonnet macaques and bats abound not just the wild but metropolises like Bengaluru.

The PFA Bengaluru’s facility has been in existence since 1996 and receives between 30 and 40 calls a day; translating to over 24,000 rescues, across 198 species. “There’s no dedicated hospital for urban wildlife and we fill that gap,” says Col (Dr) Navaz Shariff, Chief Veterinarian and General Manager of the hospital.

The calls usually come in through their hotline, and the maximum cases relate to bonnet macaques and black kites. This is the breeding season for kites, and many fall prey to the glass-filled maanja, says rescue coorindator Hishitha Jagadish.

The hospital also handles injured snakes, including rock pythons. “Our snake hospital currently hosts 10 with spine fractures. We get Russell’s vipers, saw-scaled vipers, spectacled cobras… there’s so much of construction, and therefore, displacement. Some come in dehydrated,” says Shariff.

The fractures take about three to four months to heal, and therapy takes another eight to nine months. “Some snakes and amputated monkeys stay back in our lifetime enclosures; they need at least two limbs to be independent in the jungle,” he adds.

The PFA also conducts a school outreach programme to teach eight-14 year-olds how to protect and preserve nature. Details on peopleforanimalsbangalore.org.