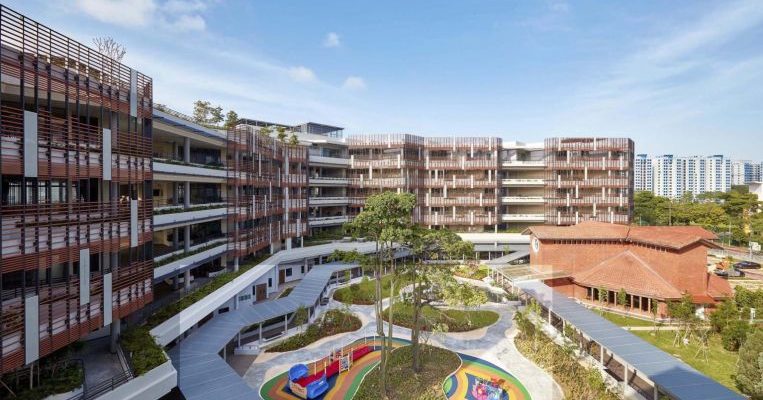 The award recognises architectural excellence from around the world and winners were announced this week. The last time a Singaporean design won was in 2013, when Parkroyal on Pickering designed by Woha Architects was named Hotel of The Year.

It took two and a half years to redevelop St Joseph’s Home and the project was completed in end 2016, with a soft opening in 2017.  The home had wanted to expand its capacity to take in more residents, said Mr Michael Leong, director of SAA Architects.

Residents were temporarily relocated to Mandai during the three years the home was partially demolished for redevelopment. It officially relaunched in March 2018 for its 40th anniversary.

In place of the former single-storey compound is a six-storey complex that houses 412 beds – up from its previous 139.

One of the main challenges was to retain the familiarity of the old home, said Mr Leong.

His first visit there in 2014, where he observed the residents’ close access to lush greenery and a central garden, left a strong impression on him.

To recreate the “ground-level environment” of an open, greenery-filled compound on every level, planters were added along the corridor and easy-access communal spaces were built. The design ensured that all residents would have views to the greenery from their bedrooms.

A looped walking path, furnished with bougainvillea and plants, was designed encircling each floor, to encourage residents to move about and interact with others. The wider corridors also allow caregivers to wheel the bedridden around.

That way, all residents can enjoy fresh air, sunlight and green views without having to leave their floors, said Mr Leong, adding that the perk helps staff in monitoring patients. “In designing spaces that enhance (their) mobility and accessibility, we strive to respect the dignity of residents.”

St Joseph’s Home, which is run by Catholic Welfare Services, is also the first in Singapore to integrate a childcare centre into a nursing home. A common canteen area and an inter-generational playground with a wheelchair-friendly see-saw were built to foster social interaction between the children and the residents.

The childcare centre is located in the original annexe block, which was retained alongside a chapel positioned as the heart of the home.

Working closely with St Joseph’s Home, the team role-played as residents and stayed overnight at the home to better understand how to create spaces that would enhance a real resident’s daily living.

Mr Leong said: “From the beginning of the project, our team’s collective focus was always on creating a person-centred home – not another institutional facility.”