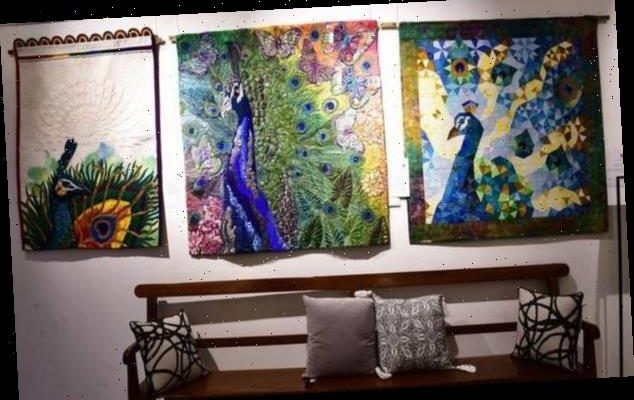 Not only are quilts things of beauty, but the act of making them have traditionally been a way of self expression, empowerment and bonding

Most of the people who showed up for the launch of the Exhibition of Quilts at Collective Space Studio, Coimbatore, came away thinking, “I want to quilt”. After all, we come from a culture that is no stranger to using scraps of fabric to create something beautiful. We are familiar with wearing hand-me-downs that are then upcycled into bags, yokes and eventually, even when they are tattered, used as kitchen rags. The kaantha from rural Bengal is an example of quilting that is an embodiment of the philosophy of reuse and recycle.

Varsha Sundararajan, one of the founders of Quilt India
| Photo Credit:
Special Arrangement

Varsha Sundararajan, one of the three founders of the Quilt India Foundation (the other two are Tina Katwal and Deepa Vasudevan), quoted the shloka: Sanaih kantha, Sanaih pantha, Sanaih parvata langhanam (‘slowly one stitches rags; slowly one traverses the path and slowly one climbs to the top of the mountain’). It exemplifies the process of quilting that is slow, steady and leaves one with a feeling of achievement.

Even mosquitoes make it to the quilt

Nineteen award-winning quilts from the India Quilt Festival 2019 are displayed. Varsha walked with the visitors explaining the story behind each one, the sewing techniques and more. There is a subliminal message in each. One can’t move away from these quilts with just a shrug. Quilts have often been used to make strong social/political statements.

Varsha introduced us to the celebrity quilters like Sara Mika who uses her works to speak out about human sexuality, reproduction, body image, and love; fabric artist Danny Amazonas; quilt maker and textile artist Jenny Bowker and some amazing quilting artists from our own country such as Padmaja Bhide, Chitra Mandanna and, of course, Coimbatore’s own Sunitha Santharam whose Bali Wedding Star quilt won third place in the Traditional Quilt Category at the India Quilt Festival.

While some of the quilts are unquestionably brilliant, others touch a chord. The one of a little girl sitting on her haunches, seemingly conversing with a cow, is fabulous. This was a labour of love of a grandmother for her granddaughter.

Quilting is often used to make social or political statements

Another work — titled ‘Anamika’ by Lalitha Rajan and Mary Eby Mathew showing women walking barefoot carrying loads on their heads — refers to the nameless women who toil twice as hard as men but are paid less than half.

Her love for baking enthused 10-year-old Ritu Sudarshan to appliqué gingerbread men, ice-cream cones, muffins and ice creams into a quilt. Peacocks are a popular motif with other quilts there where its makers have allowed themselves a free rein of imagination.

A quilt made of upcycled denim, gauze bandages and discarded t shirts

Varsha says she finds quilting therapeutic. “Traditionally it was done in groups. Women still work on quilts together. They make individual blocks and get together to sew them together. Quilting helps women bond, unburden and unwind,” she says, adding with a laugh that she knows of a group that calls itself ‘Stitch & Bitch’.

Varsha shares a historical snippet about the Rajah Quilt. One Lydia Irving (of the British Ladies Society that wanted to reform women prisoners), provided materials for women convicts who stitched the quilt as they travelled from Woolwich in England to Hobart, Australia, on a ship named Rajah in 1841.

This and a lot more anecdotes and information awaits those who visit the exhibition that is on till December 28 at 153 B, Tea Estate Compound Road, Race Course. To know more call 98946 19001