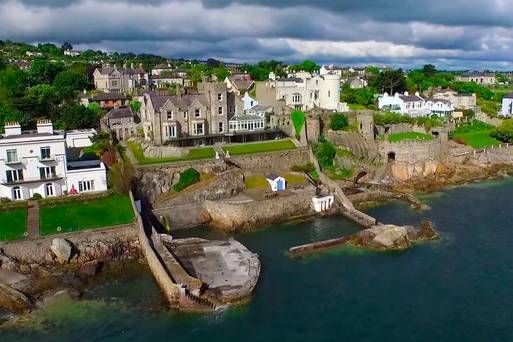 A former embassy, a seaside castellated mansion with its own private harbour, and a former orphanage were among Ireland’s most expensive homes.

Millionaire properties reached prices reminiscent of the Celtic Tiger – and in Dublin and the surrounding counties prices rocketed into a league of their own.

Heading up the list is a huge castle-style property in the leafy south Dublin suburb of Dalkey, which first appeared on the market in 2015. After attracting a buyer in 2017, the sale closed last May with a price of €7.8m.

If it wasn’t the private harbour or the uninterrupted views across Dublin bay that sealed the deal for the house hunter, it might well have been the Gothic revivalist exteriors.

But if that wasn’t enough, the six-bedroom property came complete with a seafront conservatory lined with floor-to-ceiling windows, a family room and a wet room.

A short distance away, in the same neighbourhood, is the 19th century-built ‘Lota’ on Coliemore Road. It offered a private jetty and boathouse for the taking. Last year it landed in the hands of Kingspan chief executive Gene Murtagh at a cost of €7.5m.

And if traditional doesn’t make the cut, the five terraces found in a lucrative modern house on Dublin’s southern suburb of Killiney might be more to the taste.

After being left derelict for years, a six-bedroom Hendre property was demolished and rebuilt in 2007 and rented out until 2013 when it was sold for €2.2m.

After coming onto the market again, the luxury house commanded a €3.7m price tag in July.

In another Dublin 4 hotspot, a Victorian building on Ailesbury Road, which once acted as the Hungarian embassy, was picked up for a handsome €4m.

Just as the commuter belt around Dublin continues to grow, so to does the desirability of properties in the surrounding counties.

Meath, Kildare and Wicklow all sit as the most desired locations for buyers seeking a million-euro home outside of the hustle and bustle of Dublin.

On a 26-acre site in Maynooth, Co Kildare, sits the Dowdstown Stud which has been used as a stud farm since the 1940s.

The six-bedroom mansion, along with a caretaker’s cottage, three-bed mews and a stable didn’t command the €4.3m guide price when it was first floated in 2016 – but a sizeable bid of €3.4m sealed the deal in February last year.

To the north-east of that sits a property fit for a king. Netterville, a former orphanage and school in Co Meath, has much to offer its new owners.

The four-bed manor house passed hands on a number of occasion, once occupied by the Buddhist Foundation of Ireland.

Yet it is the location alongside one of the three Brú na Bóinne megalithic passage tombs that really lights a fire.