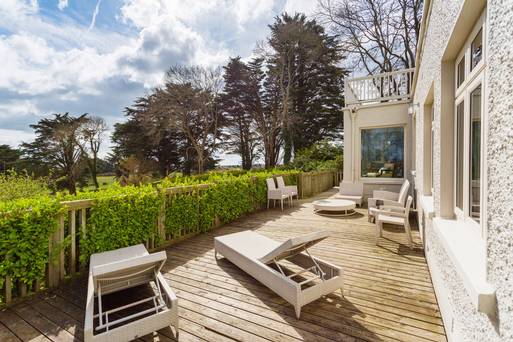 For eight weeks every year Brittas Bay increases its population many times over when it becomes a home from home to half of south county Dublin. They come in their droves in SUVs to their luxury mobile homes at the beach to set up camp for the summer. The 40-minute drive means that one parent can stay put for the season, while the other commutes back and forth to the capital. Or they take turns.

Forget Fr Ted caravan-kind-of-living. This is where the kids can check into surf school while their mothers get a tennis lesson; where lifelong friendships are formed while sipping mimosas on the decks; and where visitors need to be registered before they arrive so they can get past the security.

The downside to forking out this amount of money is that it’s all very seasonal. Most parks don’t open all year round, and even if they did, a mucky field in the middle of November isn’t very appealing to most. There is a way around this though, and that is to invest in bricks and mortar. Nordwyk is a two-bed bungalow that is less than five minutes’ walk from the beach at Brittas and is there for the owners to use all year long. It’s got all the advantages of mobile home living, but with no compromise on comfort and convenience.

The vendors bought it as a holiday home in 1998 but found themselves using it more than they could have imagined. When they were renovating their house in Dublin, they moved down to Brittas full-time and commuted up and down for work. They also enjoyed using it out-of-season when they didn’t have to compete with day-trippers for a spot on the beach.

The house dates back to the 1940s when it was part of a large farm and lived in by the farm manager. It was tired and rundown when the vendors took it on, so they did a full renovation, which included putting in double-glazed windows, knocking walls to create an open living space, upgrading the heating system and adding a raised patio area.

It has been decorated in a way that makes it easy to keep because nobody wants to have to spend hours cleaning while they’re on holidays. There are bleached oak floors in the living areas and laminate in the bedrooms, so the sand can be quickly swept away.

The front door of the house opens into the kitchen/dining room. This open-plan area has country-style units and an island with a polished quartz worktop. There is a utility room off the kitchen with extra storage and space for a washing machine.

This follow through to the living room which is both bright and cosy, with an open fireplace for cold nights and a picture window with views out to the sea. Beside the utility is the bathroom that is fully tiled in cream porcelain and fitted with a corner bath and overhead shower.

The two bedrooms are across from the bathroom. The master has super sea views from the dual aspect windows. The second bedroom is double and currently has bunkbeds.

Outside there is a raised deck that has enough room for a table, chairs and a couple of sun loungers. There is a wraparound balcony at roof level for those who want the best seat in the house for a setting sun, and the acre around the house is set out in lawn with a treehouse at the bottom of the garden.

The house is on an elevated site, so has views down to the sea and beyond. This area around Brittas Bay is an EU-protected zone because of the wildlife that is attracted to the area. The bracken-covered dunes are home to rabbits, badgers, red foxes, wood pigeons, pheasants and a rare cuckoo. Red kites, buzzards, barn owls and kestrels can often be seen overhead as they swoop down to hunt. The owners say they’ll miss the sweet sound of the woodpecker that woke them up every morning.

The beach, which was recently voted the fourth most popular beach in Ireland, has 5km of golden sand and a coveted blue flag. It’s buzzing with locals and blow-ins during the day, but at night, when everyone leaves, it’s a beautiful spot to enjoy a walk in peace.

The two main parks in Brittas are Jack’s Hole Beach Resort and Potters Point. These exclusive sites are where most of the action is during the summer. At Potters Point there is no end to the amount of activities the kids can participate in. The clubhouse offers pilates classes, a gym and fashion evenings, and for the dads there is a golf society and a cycling club. Over at Jack’s Hole, there is a private playground, soccer pitch, disco, junior golf outings and a boot camp for the adults.

Bay Café in Brittas serves breakfast, lunch and dinner, and is the hotspot in the area. Jack White’s Inn is a five-minute drive away, where there is a full bar menu and a free lift service for anyone who fancies a pint or three.

For supplies for the many barbecues people in these parts tend to host, Wicklow town is 12km away and has a SuperValu, Tesco and Lidl.

The vendors say that their children had many great years growing up with their friends and cousins in Brittas Bay and hope that whoever takes it on will be as happy as they were.

If the idea of decamping to the coast for the summer months always appealed to you, but the thoughts of a campsite turned you off, Nordwyk may well be the answer.