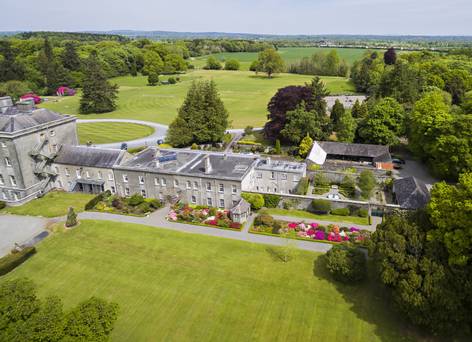 It’s a cliché of estate agent blurbs that a particular property is ‘within a stone’s throw of good schools’. But in the case of Headfort Court, that boast is quite literally true.

The school in question is one of Ireland’s only private prep schools, Headfort School in Kells, Co Meath. Set in acres of woods and parkland, the school forms the central block of a neoclassical mansion designed by architect George Semple in the 1770s and commissioned by the first Lord Headfort.

It takes both day and boarding pupils who are as likely to graduate to Eton and Harrow as the local senior school, and can stable their own ponies on the demesne. There’s something of Hogwarts about the place, with a warren of dorms and classrooms upstairs, and a headmaster’s office with a door concealed as library shelves, all fronted by a set of six imposing state rooms designed by the famous Scottish architect Robert Adam.

Headfort Court, which is currently on the market with a guide price of €1.5m, forms the east wing of the house, though it is separated from the main block by the former headmaster’s house. Built of Ardbraccan limestone, the property runs to 823sqm in total over two storeys, with the main living quarters on the first floor.

When the main pavilion was leased to the newly formed school in 1949, the then Lord Headfort removed to the east wing. Later, it was sold to the Canadian businessman BJ Kruger, who used it as a hunting lodge to entertain shooting parties on the grounds.

When the current vendors first moved in 27 years ago, it was as a stopgap – they were house hunting for something that would accommodate themselves and their three young children. In fact, their children attended Headfort as boarders – those were the days before the school took day pupils. “In fact, the kids didn’t want to stop boarding even when we lived here,” says the owner.

When the property came up for sale a year later, they bought it and set about restoring the beautiful old house. They engaged the well-known conservation architect John O’Connell to return it to its original elegance.

“We did it room by room with John O’Connell’s supervision,” says the vendor. That included restoring the plasterwork, and taking moulds of coving from the main house to reproduce in the reception rooms, adding panelling in the drawing and dining rooms, and the wonderful entrance hall which spans the full depth of the house.

They also updated the interiors by installing a zoned central heating system and lowering some of the ceilings to add plenty of insulation.

The main reception rooms lead off the central hallway, with a sitting room to the left, and a big kitchen to right with a double elevation ceiling. The floors through the hall and kitchen are foot-thick limestone flags worn smooth by use. “We had to replace a cracked one,” says the vendor, “and it took two men to lift it out.”

To the rear are an elegant drawing room and dining room, both with unusual original fireplaces and restored sash windows with Georgian shutters. All the accommodation is on this floor, a total of six large bedrooms, two of which are en suite, and the fine master suite with dressing room.

The ground level contains the workings of the house with utility, laundry, wine cellar, store room and strong room, as well as a vast boot room and a snooker room where a polar bear skin hangs – one of Kruger’s hunting trophies.

But it is the six acres of gardens that are most heart-stopping. They include a small Victorian walled garden, set out in box hedging and herbs, and a charming potting shed, where the family often hosts parties.

There is also a pretty hexagonal tea house. But the jewel is the rare and very beautiful collection of rhododendron and azalea that the owners uncovered beneath the brambles and weeds. Some of the plants date back to the 1890s when the renowned plantsman George Forrest sourced rare seeds from China, Burma and Tibet. In fact, they have recently been catalogued by the National Botanic Gardens.

“It took many years to restore,” recalls the vendor. “I love gardening, and it was quite an onerous job in the beginning because it was very neglected. [Kruger] ran a shoot here and the more cover he had the better, so really all he did was mow the lawns and everything was let grow wild.”

The property comes with a self-contained one-bedroom apartment which is in turnkey condition and brings in a rental income, but could be used as staff quarters or a granny flat.

Headfort Court sits within a walled enclosure off the main driveway to the school with plenty of parking space. The property comes with a range of outbuildings including six loose boxes, and storage sheds.

The vendors are downsizing now that their children have flown the nest. The town of Kells is about 2km drive and offers restaurants and pubs as well as shopping. Dublin is roughly an hour away, making this a spot that offers the option of a country home within easy commuting distance of the city.