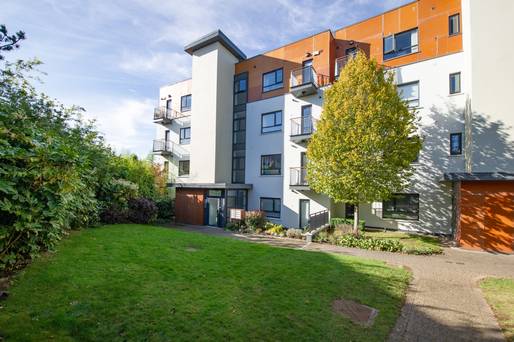 6 The Crescent on Old Fort Road in Ballincollig, a satellite town to Cork, is a two-bedroom, two-bathroom apartment that will be of interest to first-time buyers keen to get out of the rental trap and put a foot on the ladder. For anyone with the deposit saved, the prospect of being able to bring in a room-mate to help pay the mortgage will be an attractive one – and it could work equally well for a couple or small family. The 83sqm of living space is reasonably generous, and the second floor apartment has views over the hills of Inniscarra from the balcony. The gated development of 90 units was built by O’Flynn Construction in 2007, and each apartment has its own designated parking space.

For the young family that’s ready to trade up to a three-bedroom home, and wants to move straight in to a modern, reasonably energy efficient property rather than having to take on a refurbishment project, this smart terraced house in the Eldon development on Maryborough Hill in Douglas may be just the ticket. No 25 has 112sqm of living space and is decorated in a stylish contemporary palette. The main bedroom suite is on the top floor, with two bedrooms and the family bathroom on the first floor. The living room spans the width of the house and opens on to the rear garden. Douglas Village, where there’s a choice of schools, a farmers’ market and a contender for Ireland’s best chipper (KC & Son & Sons), is 1km away.

Liseevin on the Douglas Road is a 1930s house sitting on a third of an acre of mature gardens. It would make a dreamy family home for anyone in the market for an old school house replete with period features and great proportions. Granted, the decor could do with updating, and new owners will want to address the chilly BER of E2, but the four-bedroom house has good bones, which is the most important thing, and the gardens are big enough to occupy the most rambunctious of children with any amount of goalposts and trampolines. The best strategy would be to move in and get to know the house before deciding what changes to make. Douglas Village and Cork City Centre are within walking distance.

Top of the market

Those in the market for a trophy home in upmarket Montenotte might consider Arbutus Lodge, originally built in 1820 for one of Cork’s merchant families, and once home to Cork’s Lord Mayor, Charles J Cantillon. The house changed hands in 1961 and became the Michelin-starred Arbutus Lodge hotel and restaurant, a much-loved Cork institution, and returned to residential use in the 2000s, when it went through extensive renovation and upgrading. A new roof went on in 2017. The house has 575sqm of living space, and an abundance of period features including original cornicing, ceiling roses, plasterwork, corbelled pillars, fireplaces and a solid wood front door with stained glass windows.