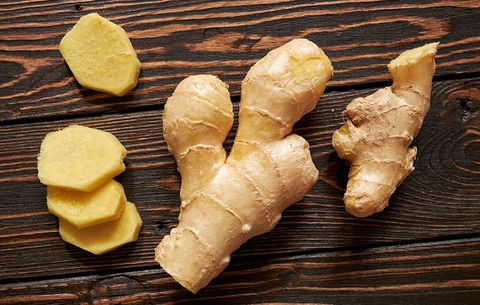 Apparently ginger is a starring ingredient in many green juices for good reason.

While the ancient root has long been touted a sick-day panacea in traditional Chinese and Ayurvedic medicine, the overall health benefits of ginger are wide-ranging, according to Karen Ansel, R.D.N. and author of Healing Superfoods for Anti-Aging: Stay Younger Live Longer.

Not to mention it’s crazy-versatile—you can throw it in your smoothie, grate some on a stir fry, add it to soup, or sip ginger tea.

Now that your pantry is stocked with the stuff (go ahead—I’ll wait), get a load of these health and beauty benefits of ginger:

1. It can reduce pain

Ansel says ginger contains substances known as gingerols that quash inflammation and turn off pain-causing compounds in the body. But if you’re dealing with any kind of chronic pain, talk to your doctor about a long-term treatment plan, since it might be something a plant can’t fix.

2. It can heal irritated skin

If strong winter winds are doing a number on your skin, start healing from the inside out with ginger. According to Ansel, ginger’s anti-inflammatory properties help soothe red, irritated skin.

3. It may help protect against cancer

While no single ingredient has the power to ward off serious disease, ginger does pack a pretty mean punch. Ginger is loaded with antioxidants that help protect the body from cancer, says Ansel.

4. It can help you look younger

You probably see the buzzword “antioxidant” splayed across your favorite expensive face creams—but that’s actually for good reason. There’s promising (yet preliminary!) research suggesting antioxidants help protect the skin from free-radicals (things in the environment like pollution and UV rays), which speed up the breakdown of collagen and damage the skin. According to Ansel, ginger’s antioxidant content can help maintain your skin’s collagen production, which promotes skin elasticity and smoothness.

5. It can help you digest quicker after a meal

Food babies are pretty uncomfortable, but thanks to ginger, they don’t have to last forever. A cup of ginger tea could help your stomach empty faster so food doesn’t just sit there after an indulgent meal, according to Christy Brissette, R.D., and president of 80 Twenty Nutrition. What’s more is that it’ll help calm your stomach and stave off bloating and gas.

6. It can reduce nausea

Why yes, you are pretty much nurse Florence Nightingale if you offer your hungover friend a can of ginger ale the morning after a fun night out. In general, ginger is a research-backed remedy for nausea, whether you’re dealing with a hangover, enduring a bumpy road trip, recovering from chemotherapy, or cursing pregnancy’s morning-sickness symptoms.

7. It can reduce bad cholesterol

Brissette says ginger can help lower LDL cholesterol levels (the bad kind!), reducing your risk of heart disease. A small recent study affirmed these findings, demonstrating that control groups who consumed three grams of ginger (that’s about half a teaspoon) three times a day experienced a significantly higher reduction in triglyceride and cholesterol than the placebo group.

8. It can ward off cardiovascular disease

Ginger’s blood-thinning properties could help prevent the formation of blood clots, reducing your risk of heart and stroke. Brissette warns that if you already take blood-thinning medications, check with your doctor before including more ginger in your diet.

9. It can help boost immunity

Why do people live on ginger lozenges when they’re sick? Those same gingerols that fight inflammation also have antimicrobial and antifungal properties to help fight infections and boost your immunity. Steal Brissette’s speedy-recovery go-to:

Or, toss a teaspoon into chicken soup for some added cold-fighting benefits.

10. It can ease period cramps

If you find yourself clutching your abdomen in pain every month, you might want to try an ibuprofen alternative, according to Jessica Perez, R.D. “I firmly believe ginger is one of the best natural forms of medicine,” she says. “It helps with so many inflammatory processes.”