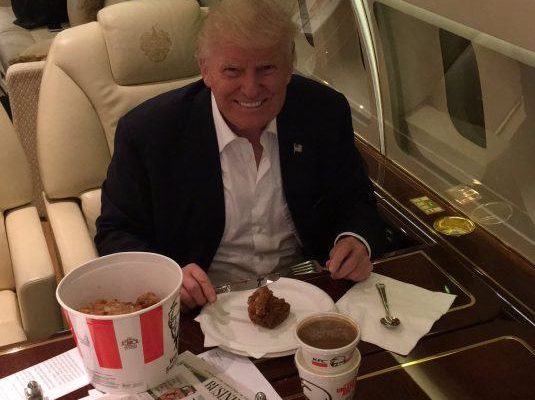 Like most families, the Trumps have their special stash of snack and munches on hand. Donald Trump especially makes no bones about his preference for junk food so digging into his pantry shouldn’t produce many surprises. Or will it?

His predecessor preferred these type of snacks

A health nut to his core, President Barack Obama preferred to snack on nuts and vegetables. His “must have” list included Planters Trail Mix: Nuts, Seeds, & Raisins; roasted almonds; pistachios; and MET-Rx chocolate roasted peanut protein bars. When it came to veggies, he dug broccoli and spinach. And for a sweet treat, Obama enjoys smoke salt caramels from Fran’s Chocolate in Seattle.

The former president also loved apples too, according to The Cut. He maintained a large bowl of apples in the Oval Office and a supply of almonds on hand to snack on while pouring over this briefing books.

But Trump keeps this in the White House

Obama’s healthy snacks are now replaced with a lot of junk food in the Trump White House. Leading the list are Lay’s potato chips, according to The Cut. He also had Lays stocked on his private plane and the greasy chips followed him to 1600 Pennslyvania Avenue.  But it doesn’t stop at Lays. Trump is also a fan of Doritos too.

He also loves ice cream, especially vanilla or cherry vanilla. But here’s the kicker. While he enjoys two scoops, he only allows others to have just one. Nice. He also loves chocolate cake, even lamenting about how delicious a chocolate cake he had as he made the decision to bomb Syria, according to The Daily Meal. Another sweet treat he leans on are See’s Candies.

He washes his chips down with his favorite drink

Rather than a big glass of water, Trump prefers his Diet Coke. Oddly, as much as he loves Diet Coke he tweeted in 2012 that he’s never seen a thin person drinking the diet soda, Cheapism reports. However, The Washington Post reports the president consumes up to 12 cans of Diet Coke per day. Clearly, he loves it.

Otherwise, he’s known to partake in a virgin Bloody Mary, according to Axios. “It’s like his version of a cocktail,” an aide said.

Trump has a complicated relationship with another favorite snack

At one time Trump was an Oreo-a-holic. He loved Oreos but, sadly he can’t eat them anymore. “He used to love Oreos but he really did stop eating them once they moved [their plants] to Mexico,” an aide told Axios.

But he can still nosh on vanilla-flavored Keebler Vienna Fingers, which are always on his plane along with the Lays potato chips.

He also snacks on food you might order at a bar too. This includes french fries and deep fried mac n’ cheese balls. He was spotted ordering the deep-fried devils on the campaign trail where customers were calling him a racist, The Daily Meal reports.