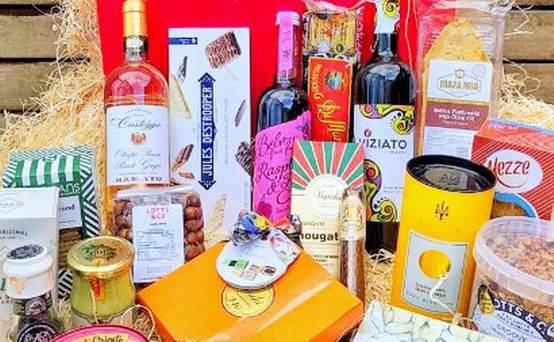 What do foodies want for Christmas? Katy McGuinness has the answers.

You can’t go wrong with a voucher for someone’s favourite restaurant. Personally, I’d be delighted with one for any of the following: Etto, Uno Mas, Forest Avenue, Michael’s of Mount Merrion, Campagne, Ox…

Lily Ramirez-Foran offers cookery classes followed by BYOB supper in her Picado Mexican shop in Dublin, with new classes being released each day until Christmas Eve, from €60, picadomexican.com

At The Tannery in Dungarvan, there are classes focusing on everything from Meat-free Cooking to Flavours of the Middle East, from €75, tannery.ie.

A reservation at a destination restaurant, with flights. You won’t go far wrong with Brat (London), The Sportsman (Kent), Extebarri (near Bilbao), Estela (New York) or Amass (Copenhagen). The new season Capezzana (left) is fabulous – you’ll find it in independent retailers and wine shops such as 64 Wine in Glasthule. The ‘Garject’ (right) by Aussie brand Dreamfarm was voted the world’s best garlic crusher by people who know their onions. Made from a weighty steel, you can stick two unpeeled garlic cloves in at a time. The press crushes the garlic through and then scrapes it for you with a sliding scraper design feature. When you’re done, there’s a spring to eject your peels. Hey Presto! €35. Pick it up at Triggerfish Cookshop in Blackrock, Co. Dublin.

Mauviel have been making copper pots in Normandy, France since 1830. Copper, with its rose-like shine, is the ultimate in cookware because it is the best conductor of heat and gives an even distribution of heat around the pan. The timeless quality of these pans makes them an heirloom, which goes some way towards justifying the price. Set of three saucepans with matching copper lids. Priced €950 at Triggerfish Cookshop, Blackrock, Co. Dublin, triggerfishcookshop.ie.

The next ‘Chef Sessions’ pop-up takes place on February 25 at the Market Lane group’s ORSO restaurant in Cork city centre. Four of the group’s younger chefs train intensively for two-to-three months to present an eight-course menu using ingredients that have truly inspired them. Tickets are €75 and include wine and beer pairings. See orso.ie.

The one-day Introduction to Butchery course at Croan Cottages, to be held on March 23-24, would make a great gift for a meat lover. Led by two expert butchers, the morning session will involve the butchery of a hogget, and in the afternoon, students will butcher a deer into its primal cuts before learning how to stuff and link pork sausages. €175 to include lunch, or €225 with overnight accommodation. See croancottages.com. Diana Henry: How to Eat a Peach, Octopus Books, €35: The Northern Irish writer’s latest book is another beauty, with seasonal menus that will transport you to an afternoon by the seaside in Brittany before moving on to a sultry evening eating mezze in Istanbul. As always, Diana’s writing is exquisite.

Nik Sharma: Season, Chronicle Books, £26: Nik Sharma’s recipes are a revelation, his flavour combinations inspiring and vivid. One for the jaded cook who needs to get his or her kitchen mojo back.

Jamie Oliver: Jamie Cooks Italy, Penguin Michael Joseph, €30. With some of Jamie’s books there’s a sense that he’s going through the motions – this is not one of them. It’s terrific.

MFK Fisher: Consider the Oyster, Daunt Books Publishing, £9.99: The legendary food writer’s tribute to that most delicate and enigmatic of foods is a gem, her prose wise and witty.

Gaudry & Friends: Let’s Eat France, Artisan $50: This massive tome is a virtual encyclopaedia devoted to French food with recipes, profiles of French food icons including Brillat-Savarin and Bocuse, and region by region guides to cheese, charcuterie and signature dishes. One for Francophiles.