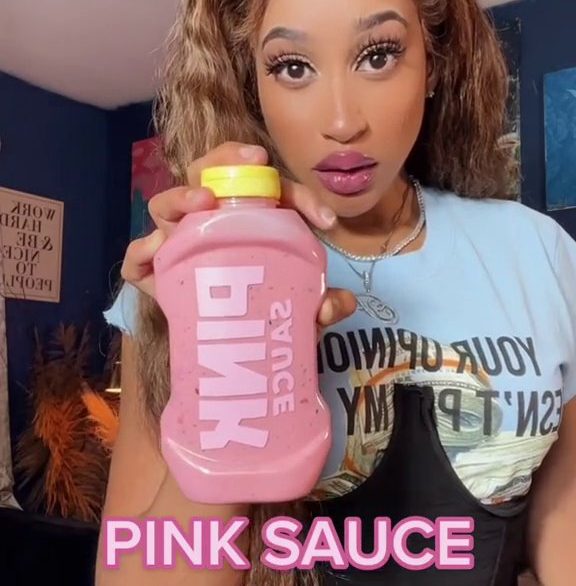 People will buy anything on the internet if it’s hyped up enough, from gamer girl bath water to farts in a jar, and it seems that this theory applies to food, too.

TikTokers have been purchasing a woman’s homemade ‘Pink Sauce’ in their droves – and it’s become a condiment mired in controversy.

It all began when creator Chef Pii started promoting her $20 dip on the platform, showing off the packaging and reviewing it alongside different foods.

Pink Sauce allegedly sold out in a matter of hours, with its Barbiecore colour and ‘sweet yet spicy’ description tempting shoppers.

However, with little available information about the product’s exact flavour and ingredients, people began asking questions, to which Miami-based Pii gave cryptic and unclear answers.

Others noticed that the pink shade of the sauce seemed to change slightly between videos too, further adding to the mystery.

Eventually, Pii was forced to reveal the components of the sauce (sunflower seed oil, dragonfruit, chilli, honey, and garlic) alongside a seemingly-plausible explanation that lighting changes were to blame for its inconsistent colouring.

But that’s not where the saga ends.

Multiple creators claimed the nutritional label for pink sauce had errors in it, while others argued that a lack of preservatives in the recipe made it unsafe to consume if not stored and shipped refrigerated.

Customers claimed to have received ‘rotten’ orders and complained. Chef Pii responded that Pink Sauce was still in ‘lab testing’, but continued selling it anyway. From the outside, something didn’t add up.

Doubts abounded over Pink Sauce’s murky origin story: Does a bottle actually contain 444 servings as labelled? What warrants its hefty price tag? What the heck does it even taste like?

Although Chef Pii apologised for the label errors (saying ‘I’m only human’ in a recent TikTok), the explanation wasn’t enough for some amateur detectives.

One theorist claimed that the numbers on the label were altered to be ‘angel numbers’, while others doubted whether the company was registered with relevant health and safety authorities (Pii later said she was).

Further investigation led Melissa to believe that there was actually mayonnaise in there, and after replacing the milk with this she was able to concoct something similar.

Melissa came to the conclusion that parts of the ingredients label were lifted from that of a store-bought mayonnaise, which is why the amounts seemed off when it came to replication.

Current situation in recreating the #pinksauce

Letâs see what some edits can accomplish. pic.twitter.com/uFno7uxGX5

At this point, Pink Sauce is more meme than food, making it difficult to tell whether it’s actually worth the hype surrounding it.

One thing we do know, though, is that it’s not wise to consume food when you have no idea what’s in it.

During previous lockdowns it was de rigueur to order sprinkle cakes and seafood boils from Facebook, picking them up to realise they were cooked in distinctly non-professional kitchens.

Surely we’ve learned something since then.

Don’t be that guy; getting sick for the ‘laugh’ of trying an internet-famous product and regretting it later – especially when a bottle of that product costs the same as a few hours’ wages.

Metro.co.uk has contacted Chef Pii for comment, and will update this article if we receive a response.