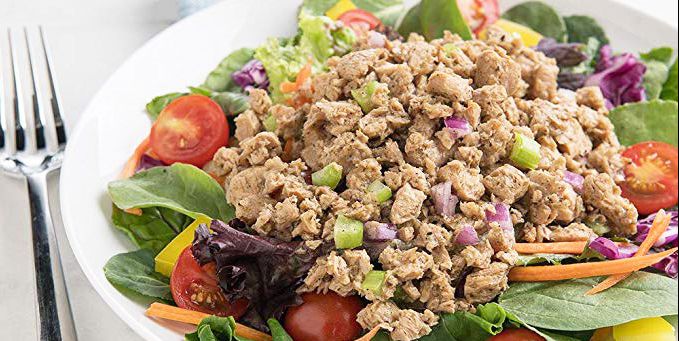 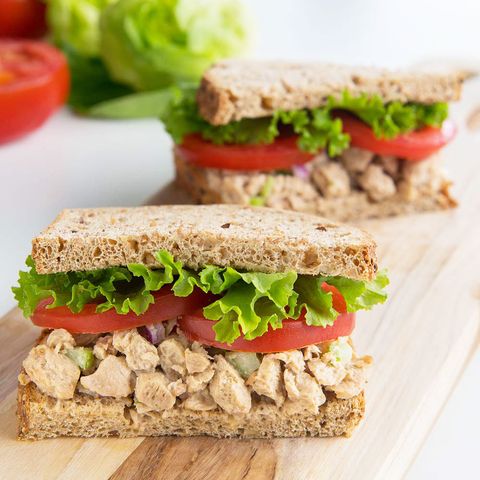 Remember when Tofurkey was the craziest meat replacement product on the market? Well, prepare yourself for peak plant-based living, because the newest vegan protein isn’t designed to look or taste like poultry, pork, or beef. It’s Tuno, a “seafood alternative.”

I had one question for Doug Hines, the former Bumble Bee Tuna investor who founded Tuno: Why?

“There’s a long-term need for alternate protein sources,” Hines says. “And overfishing is a growing, global problem.” So many companies keep sinking money into building a better meat-free burger, but to Hines, a tuna man from way back, the solution seems obvious: build a better canned fish, even if it’s not actually fish.

“Tuna is the category leader for shelf-stable canned food products,” Hines says. And there was room for improvement; sustainability issues aside, tuna can be high in mercury, and other oceanic pollutants like microplastics are a growing concern.

Atlantic Natural Foods, the company that makes Tuno, does so by combining soy, yeast, and sunflower oil. Right now, a serving has roughly 80 percent of the omega-3s of tuna, and practically as much protein (1 5-ounce can of Tuno has 10 grams of protein; 1 can 5-ounce can of tuna has 20 grams). Hines says that after the “reformulation” that is currently underway, Tuno will eclipse real fish in both those nutrients. Tuna also costs slightly less per can ($1.49-1.99) than many brands of the fish-based stuff.

Hines admits that, while Tuno’s nutritional profile would seem to appeal to the wellness crowd, “It’s not really built for vegetarians.” Like beefless burgers, Tuno’s trying to hook a crowd that’s already familiar with an animal protein source, but wants a supposedly healthier, more sustainable, or less expensive option. As these things go, taste will be the deciding factor. There are three kinds of Tuno: the original, in spring water, lemon pepper, and Spicy Tuno with sriracha. I tried them all, as did Paul Kita, Men’s Health Food & Nutrition Editor.

Each 5-ounce tin has an easy-open pop top. The company is debuting pouches (“for millenials,” Hines told me) and I’d definitely recommend going that route to avoid a direct comparison with pet food. Which, honestly, is pretty much what Tuno looks like. The chunks are a bit smaller than actual tuna fish, and the sauces don’t really help.

Overall, the texture of Tuno is more chewy than flaky, and like most soy-based products, the flavor came mostly from the sauces.

This type of Tuno is your base Tuno, intended to be mixed with mayo or smothered until melted cheese atop a slice of toasted bread. I ate it straight, for journalistic purposes. Quite frankly, I don’t think that even mayonnaise would improve the flavor of Tuno original. It tasted like soggy croutons in tuna-flavored water.

The second opinion: I did mix this Tuno with mayonnaise. And soy sauce. And sriracha. And harissa. While there’s an umami taste to the “fish,” it outmuscled any other flavors I tried to pair it with. Deflated, I fed some to my nine-month-old, who will eat pretty much everything. He took a bite, and then promptly gave me his look that says, “One more bite of this and I’ll never trust you again.” —Paul Kita

You know the lemon juice from those citrus-shaped squeeze bottles? This flavor tastes like that. For some reason, it reminded me of bad bottled iced tea with chemically-replicated lemon­—almost strangely tannic. The black pepper on the end was overpoweringly spicy too.

The second opinion: This one was my favorite. Though the texture was chewier than tuna, I didn’t mind. The lemon flavor was subtle and the pepperiness played more of a supporting role. It wasn’t overpowering and tasted great on its own. Would I pick it over a regular ol’ can of tuna? I just might.

Despite the manic-panic colored sauce, this one was my favorite, probably because of all the added sugar. That, or the hot pepper flavor short circuited my taste buds so they weren’t aware what was happening to them. The sugar and spice pleasantly distracted from the chewy texture here too.

The second opinion: Unlike Jill, I wasn’t feeling this flavor. Though it was certainly more palatable than Tuno OG, that’s likely due to how much added sugar comes in the can: six grams. Your typical green-topped sriracha bottle contains no added sugar—and neither does typical tuna so I’m not sure why it’s needed here. That said, this Tuno tasted best mixed with mayonnaise.

The Verdict on Vegan Tuna

If you’re vegan or vegetarian, you might love this stuff. Start with one of the flavored options, which go down far easier. If you’re more of a let’s-try-to-eat-more-plants type of person, well, then Tuno is going to be more of an acquired taste for you.

Even if the product itself is lacking, you have to respect Tuno’s mission. Overfishing is a problem, American diets are low in omega-3s, and I have every confidence that someday, someone will find a palatable solution—literally and figuratively—to those issues. They may even start by asking, “Why not?”